The musician and producer has a new album and concert film coming out Aug. 4. 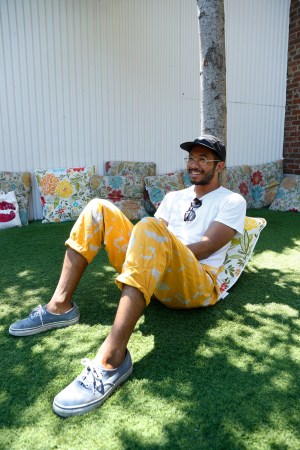 “What is it that’s present in all good music?” asks Chaz Bundick, sitting in the courtyard at Freehold in Williamsburg on a recent high-80s Friday afternoon.

Bundick, the 29-year-old musician and producer known as Toro y Moi, is gearing up to release his sixth album on Thursday, a live record and concert film called “Toro y Moi: Live From Trona,” and he’s feeling reflective when discussing his inspirations.

“When I look at a well-designed chair or like an album that still stands today, I listen to what it is that’s transcending all of these things,” he explains. “Timelessness and what makes things last. That’s the main inspiration.”

Bundick, a native of Columbia, S.C., has no trouble absorbing the visual world around him and channeling it into his music. After graduating in 2009 from the University of South Carolina with a degree in graphic design, he launched his career with the 2010 release of his LP, “Causers of This.” The album gained him notoriety amongst the “chillwave” music movement, a blend of lo-fi, retro pop; in the years following, he has released four more studio albums, a mixtape and a record under the pseudonym “Les Sins,” where he explored a new, more electronic type of music.

There’s no doubt that his universal approach to music was somewhat influenced by his teen years, where he spent most of high school being outcast by his peers because of his biracial heritage. “I was made fun of by all the groups — the preppy kids, the black kids,” he says. “So, by default, I ended up falling into the skate-musician punk group. We listened to everything from punk to rock to jazz. We just wanted to hang out and listen to good music.”

The new album and concert movie, filmed and recorded in three hours outside of Los Angeles in the Trona Pinnacles, was completed in a single shot, over the course of 24 hours. “The desert in general represents so much because you go out there and you find out so many things are still alive and you feel so much smaller,” Bundick says. “I love that.”

The California setting served as an important detail for the film. “I feel like there’s a lack of Americana in young American bands — they don’t really represent the States,” Bundick says. “To be honest, we’re not really in the light for the best things sometimes. [The live concert] was just something special to do. A lot of bands aren’t doing live concert films and I miss those.”

The film, art directed by Bundick himself and director Harry Israelson, aims to radiate an Eighties nostalgia reminiscent of Pink Floyd. “I want people just to be inspired, really,” Bundick says. “I just want people to see it and be like, ‘That’s so cool that they did that, I got to see that band grow and do something grand.’”