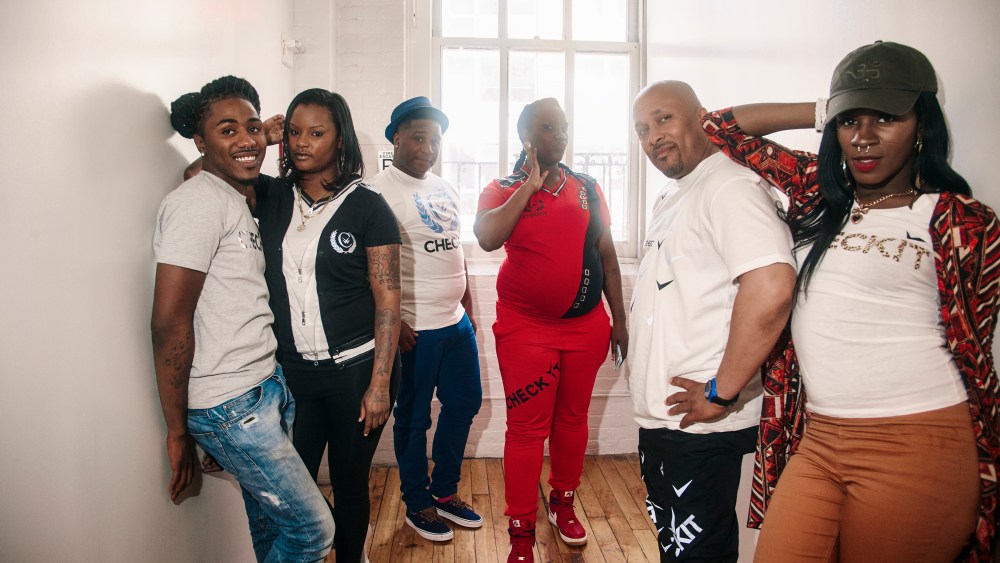 The Check It is a gang of 14-to-22 year olds who have been shot, have police records and are widely known on the streets in their neighborhoods of Washington, D.C. They also happen to be the only documented LGBT gang in America.

Their story is the subject of a documentary, “Check It,” which debuted at the TriBeCa Film Festival this week from directors Dana Flor and Toby Oppenheimer and executive producers Steve Buscemi and Stanley Tucci. The film follows Tray, Day Day, Star and Skittles, just four of the now 200 members of the gang, as well as their mentor, Ron “Mo” Moten, an ex-convict who works closely with the group.

“What makes people violent has nothing to do with sexual preference; it’s about circumstances,” Moten says, sitting with the group in Chelsea the morning after the film was first screened during the festival. “And right now there’s nobody dealing with that because people don’t want to associate with anything that’s violent or gay.”

The Check It formed in 2009 when a group of ninth graders from the most violent parts of the nation’s capital decided to band together in retaliation against the bullying they’d been subjected to for being LGBT. Flor and Oppenheimer learned of the group through Moten and first sat down with the now-stars of the film four years ago, at a local Denny’s. “I remember the first time when they came, and it was like OK, we’ve heard this so many times,” Tray says. “People have come to us before but we don’t just trust anybody.”

Day Day agrees: “It’s a matter of time before you can trust people; I have to know who you are and I did a lot of reading up on Ms. Thang,” he says, pointing to Flor, “and then I knew she was about her business.”

Hope and motivation for a life away from gang violence came through an unusual outlet: fashion. The film shows Day Day, Tray, Star and Skittles as they work to produce a local fashion show and eventually travel to New York Fashion Week to work the shows backstage. A clothing line, Check It Enterprises, was launched afterwards; the unisex clothes are designed and made by Check It members and, for now, are available only online.

“The movie and the clothing line have them open to a lot of hope,” Moten says. “I think they live for it. Especially with Star — Star is really focused and it’s the fashion aspect more than anything. That’s what most people in life need — they need something to motivate them, to make them want to go to the next level, or to see a way out to where they want to go. [Fashion] was the hook that kind of made them see the light and I think it’s something that needs to be institutionalized in the city, as far as the arts. They’re using arts and fashion as a way to heal and tell their story.”

Many of the members are working on the line full-time. They came to New York to source materials for their most recent collection, which expanded from T-shirts to include “whole outfits like jumpers, two-pieces, springwear,” Star says, scrolling through iPhone pictures of the collection. “It’s very cute. I used to model, but I’ve never made my own clothes before. But I really like it.”

Fashion has grown from a routine interest into a lifeline for the Check It — and will continue to trickle down, Moten hopes. After the first fashion show in 2013, strangers started calling and praising the members for being open with their story. “People said, ‘It really touched our hearts, y’all had to be brave to tell your story like that,’” says Netta, a Check It member. “Even if we weren’t comfortable, we still made it as if we were comfortable. I got comfortable with it because some people can relate to my story and if I go and tell my story, maybe they feel more comfortable telling theirs.”

The film swings between moments of inspiration and uplift, and scenes that show the often tragic reality for black gay and transgender youth in D.C. In one scene, Tray is shown calling for an update on his reporting of a rape, to no avail; another moment shows Day Day visiting with his mother, who struggles with drug use.

“It’s important to give people the opportunity to heal and maybe they can help heal others,” Moten says. “With the fashion line, that’s where they plan on going; not just selling clothing, but also [using it ] as a way to help other people from their community.”

He hopes to introduce outreach training so they can continue changing the course for the younger sector of young LGBT people in Washington. “It shouldn’t be me,” Moten says. “I mean, I can help people, but they’ve got the power. It’s important for the city that didn’t embrace them to embrace them, to wrap their arms around them and help them, right?”