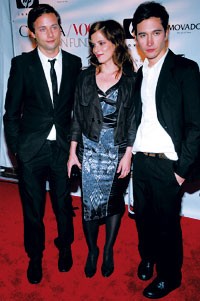 Fashion is a tough business and getting ever-more competitive, as Isaac Mizrahi can attest. Having only recently relaunched his signature collection, he must be forgiven if his warm-up act for the CFDA/Vogue Fashion Fund awards dinner on Thursday night came across as a tad harsh, even toward Anna Wintour, who had taken great pains during the night to champion the struggling young designers of America.

“I can’t afford to champion the new guard — I am the new guard,” said Mizrahi. “For such a glamorous business, it’s such a hard and arduous task. There are a lot of easier ways to get laid or get famous.”

With such adversities in mind, Wintour and her fellow judges in the competition had their work cut out for them, an emotional process that whittled down 170-plus applicants to the final three award recipients: Proenza Schouler designers Lazaro Hernandez and Jack McCollough won the top prize of $200,000 and a year’s worth of mentoring from industry experts, while two runner-up prizes of $50,000 apiece were presented to Habitual designers Nicole and Michael Colovos, and Cloak designer Alexandre Plokhov.

“The process alone helped us think about our business more seriously,” Hernandez said. “To have people who pick you up and support you, it’s such a cool thing to do.”

Several of the finalists, such as Peter Som, Derek Lam and Dean Harris, similarly described the application process as a real eye-opener when it came to figuring out their long-term business plans. Doo-Ri Chung, who demonstrated her discipline in keeping expenses down by dragging some of the Vogue staff out to her studio — in Ramsey, N.J. — fondly recalled the application as “a huge book we had to fill out, but at least we brought a little class to Jersey.”

When the establishment of such a fund was conceived, in a conversation between Wintour and New York City Mayor Michael Bloomberg, its organizers had no idea just how badly the designers were in need of financial assistance. As Michael Colovos described it, “Fashion, like poverty, is the great equalizer — we’re all struggling,” and even old souls like Zac Posen agreed that times have been especially rough since the 9/11 terrorist attacks.

“There was no reception for young designers at all when I started my first collection,” said Posen, who has since joined forces with Sean “P. Diddy” Combs. “The idea of a young designer was pretty much a joke. Nobody was interested and there was a lot of skepticism. People were asking, what’s the point of somebody new?”

But these days, the field of young designers gets bigger each season, thanks in part to the fast success of the rising class of neophytes, and also the rush of celebrities who are competing for the same buzz in stylish circles. Erin Wasson, the model, confessed that she, too, plans to enroll in the Gemological Institute in January to pursue a career in jewelry design, just as she praised Harris’ design perched upon her head.

The actress and clothes horse Parker Posey, who accompanied McCollough and Hernandez to the event at Skylight Studios, described the current cacophony of fashion voices as simply a counterpoint to the work of those truly dedicated to their craft, such as her dates. “They are like old-school designers,” she said. “Still, I’d love to have a JLo sweatshirt, but I would buy it secondhand. I wouldn’t buy it at full price.” And if the competition from celebrities is too much, well then, this is the industry’s own form of intervention.

The dinner, which drew pros like Narciso Rodriguez, Carolina Herrera and Vera Wang, along with aspirants to the thrones of Seventh Avenue, served as a reminder of the long road ahead for those starting out.

“Back in my day, like 150 years ago, it wasn’t the same place,” said Marc Jacobs. “I always found fault with the CFDA back then. I thought it was just about the older designers patting themselves on the back, but now it’s different. When people have a passion and the energy for design, they are going to find a way.”

The mayor also offered some advice to the newbies.

“Don’t listen to anybody, because if you really are innovative and creating something new, by definition, nobody is going to think you’re doing it right,” Bloomberg said. “They all want you to do what they did, and if you do what they did, you’re just going to be another has been.”