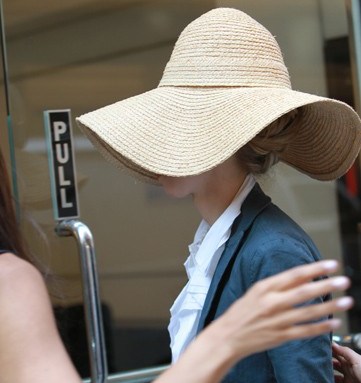 NEW YORK — With her major-league wedding just days away, Chelsea Clinton was spotted paying a visit to Vera Wang Tuesday afternoon — despite a blatant attempt to go incognito.

Wearing a gigantic, floppy straw hat, a ruffled blouse, slate blue linen shorts and a coordinating jacket, the former first daughter and an unidentified friend were whisked upstairs to the designer’s showroom by an awaiting staffer. Still recovering from a broken heel, the bride-to-be stepped cautiously — sans crutches — though the area was crawling with Secret Service agents should she need assistance of any kind.

With her hair pulled back in an aisle-worthy updo and makeup perfectly applied, the 30-year-old arrived on the scene about 15 minutes after her mother, Hillary Rodham Clinton, for what was believed to have been a 4 p.m. appointment. Asked on the street what she found most challenging about planning a wedding, Chelsea Clinton looked up briefly but remained silent and lowered her head again. Two burly Secret Service agents stood guard in the building’s lobby, while others cooled their heels in nearby SUVs and periodically patrolled the street. Not one for any kind of idleness, the Secretary of State/mother of the bride scrolled her BlackBerry momentarily on the sidewalk while waiting for her handlers to disembark.

Wang also declined comment Tuesday. In addition to the wedding gown, she is said to be designing the bridesmaids’ dresses as well as the flower girls’ dresses. The mother and daughter have reportedly met with Wang five to 10 times in the past four months for an hour to 90 minutes each time. They allegedly often arrive up to 30 minutes late for their appointments.

But Vera Wang wasn’t the only fashion stop for the Clinton clan Tuesday. Earlier in the afternoon the senior Clinton dashed into Oscar de la Renta’s Seventh Avenue showroom. While one eyewitness said her daughter joined her at that meeting, others insisted she was flying solo, though Chelsea Clinton easily could have been missed under that straw hat. In any event, both mother and daughter have met with the designer on several occasions in recent months. De la Renta, of course, started dressing the former first lady in her White House days and is chummy with her and the former president. The Clintons have been known to stay with de la Renta at his vacation home in the Dominican Republic, where many nights have been passed playing the card game “Oh Hell.”

De la Renta declined comment through a spokeswoman Tuesday. However, tenants in his office building claimed to have seen both Clintons on the premises several times in recent months. Whether the younger Clinton plans to double dip at her Saturday wedding day by wearing one designer dress for the ceremony and another for the reception remains to be seen. Either way, the affair will be leagues above her parents’ considerably more meager nuptials. Hillary Rodham wore a granny-looking dress when she exchanged vows with Bill Clinton in a Methodist ceremony in the living room of their Fayetteville, Ark., home.

Chelsea’s big day with investment banker Marc Mezvinsky is believed to be set for Astor Courts, a Stanford White-designed manse commissioned by John Jacob Astor 4th, in Rhinebeck, N.Y. There should be plenty of wardrobe changes during what will reportedly be a $3 million-plus, three-day celebration with a rehearsal dinner Friday night at a Pamela Newhouse-owned stone barn in Grassmere, N.Y., and a post-wedding brunch bookending Saturday’s main event. Residents on River Road, a main thoroughfare in Rhinebeck, have already been notified that more than a mile of their street will be closed to all vehicular traffic Saturday. The town of Rhinebeck has allocated funds should local police need to assist state police with security.

As for the Clintons, they have proven they can hold their own in terms of shielding media from the details of Saturday’s extravaganza. Bill Clinton, however, was more than loose lipped when raving about his future son-in-law a few months back. After accepting a $1 million check for Haiti’s earthquake-relief efforts this spring, Clinton spoke at length about how his daughter’s relationship came to be. “It’s a great thing because they really do know each other. It’s the best kind of relationship — it’s a warts-and-all deal,” Clinton said. “Not only do I like him, I admire him. I really caught a break.”