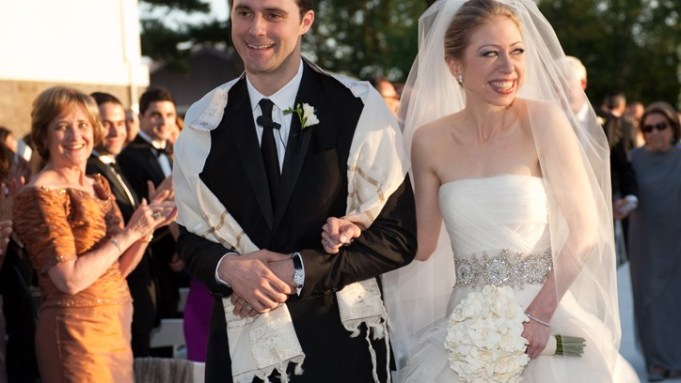 When the wedding is over, be it the toniest, most high-profile and exquisite wedding imaginable or a budget-conscious DIY affair at the local lodge, when the Champagne flutes are dry, the cake a gluten-free memory and fatigued dancing feet long soothed, all that’s left (apart from, one hopes, a sound marriage) are the pictures. Moral: a girl’s got to love her dress.

Shallow? Not at all. After the bride herself, the dress is the event’s second-biggest star, even when, as in Chelsea Clinton’s case, the parents are of supernova status. One only need peruse the countless wedding retrospectives on the Web last week — Celebrity Weddings, First Daughters, Nontraditional Brides. None focused on table settings, cakes or long forgotten menus.

MORE WEDDING COVERAGE:
The Chelsea Affair — Read about the top-secret wedding of the decade, from the guest list to Bill’s celebratory toast >>

When it comes to weddings we didn’t attend, visual memory is all about the bride and what she wore. Such, too, will be the case with Chelsea, who said “I do” to Marc Mezvinsky in an exquisite Vera Wang creation.

In perusing photos of past wedding belles, one sees ample opportunity for pictorial regret. Surely not concerning Bianca Jagger; you have to love forever her audacious trend mongering in tailored YSL and floppy hat (perhaps Chelsea was paying sly homage last week?). Nor even Pamela Anderson, who deserves crazy kudos for marrying Kid Rock, her salined glory clad only in a white bikini. Oddly enough, trying for tradition is sometimes the more dicey choice. From the first daughter pool, in 1967 for her wedding to Charles Robb, Lynda Bird Johnson wore a stiff column and stiffer helmet hair. More famously, however hallowed memories of Charles and Diana’s storybook wedding may be, with nearly 30 years hindsight, her pouf dress by the Emanuels is a pouf-fing flop.

Chelsea should suffer no such sartorial second-guessing. She looked gorgeous in a way that makes perfect sense for a young woman whose style to date one would classify as conservative. For her wedding, she chose to work the interesting side of classic. Perhaps not surprisingly, Chelsea started with the most popular bridal silhouette across all economic stratas: the full-skirted, strapless bustier. It could have been a snooze. But no one manipulates tradition more deftly than Wang; on the occasion of her 20th anniversary in business, she told WWD she wished more brides would be more adventurous, and so she takes whatever opportunity she can to nudge them along.

Word was that Chelsea had requested an artsy approach to the genre. Whatever discussions in fact transpired between bride and designer, the result was magnificent. Chelsea’s gown, in silk tulle and laser-cut organza, incorporated complicated elements Wang has perfected: the crisscross bodice draping and the skirt’s faux-random tiers and swirls, the latter never worked more dramatically than here. The treatment transported a familiar silhouette into the realm of distinctive, elegant high chic. A sash with a slightly aged, Belle Epoch feeling rendered masterfully in crystal- and pearl-embroidery on tulle attached to a ribbon and tied in back made for the gown’s only other embellishment. Wang lifted this concept from her ready-to-wear, where she has used tied-on crystal extras to dress up her bohemian sportswear. Worn as a blusher, Chelsea’s unadorned veil looked more sensual than girlish, while her shoes, open-toe platforms that looked to be satin, added a touch of retro.

As for the speculation that Chelsea would wear six figures worth of jewelry, if true, the ticket price was in the quality of the stones. Apart from her engagement ring (her wedding band appears to be plain platinum), she opted for discreet gems: diamond earrings featuring two seven-stone flowers, one above the other, and a tennis bracelet centered with a similar flower.

By now anyone with a pulse and an Internet connection has seen the photo of Chelsea on the arm of her father, Bill Clinton, a shot that offers the best full-length view of her dress. Many of us would also love to see her lineup of lavender-clad bridesmaids as well as the children rumored to have been members of the wedding. And, oh yes, a good look at Hillary’s Oscar de la Renta gown, its Italian organza in a high-drama ombréd range from magenta to pale pink. At press time, those photos remained off-limits. While the extreme pre-nup discretion is understandable, who knows why the continued veil of secrecy? It’s unlikely they’ve sold the rights to People.

No matter. We’ve all gotten our wedding fix, not of the year/decade/century/Millennium, but of the moment, at least until the next marital megamerger comes along. (Three words: William and Kate). For now, everyone seems genuinely happy for Chelsea and Marc. Perhaps happiest of all, aside from the newlyweds themselves? That would be Robert Huth, president and chief executive officer of David’s Bridal, Vera’s new mate, professionally speaking. Will their union result in an under $1,200 take on Chelsea’s dress? No. Nor would Vera attempt to knock herself off so precisely.

But when your cousin Linda’s daughter gets married next spring, don’t be surprised if she swans down the aisle in a strapless dress with an artfully souped-up, swirly skirt.