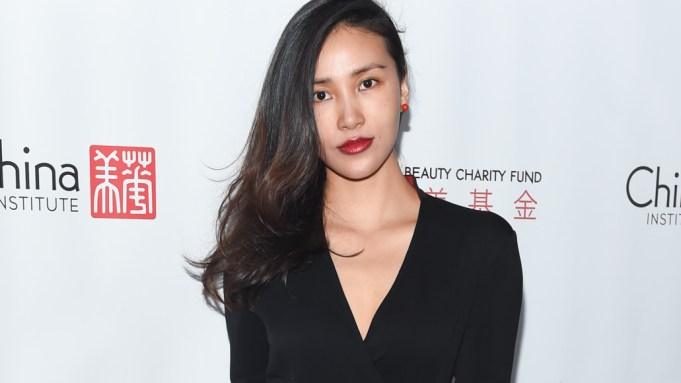 Chen Man is aware of the fashion industry’s inability to “define” her and frankly, she likes it that way.

Born in Beijing in 1980, Man is known for her photography, graphic design and modern experimental art. Her subjects include Rihanna, Victoria Beckham, Nicole Kidman and Fan Bingbing, and her work has been featured in Harper’s Bazaar China, Vogue China and i-D, among others. She has been called “the Annie Leibovitz of China,” and though she’s familiar with the comparison, it’s not necessarily one with which she agrees.

With the help of a translator, Man explained how traditional Chinese philosophy and medicine inspire her work. Just as a doctor uses “special characteristics” to cure a patient, she uses her photography and graphic design to capture the essence of her subject. And it all starts with a stare.

“I love to stare at people,” she said during a Q&A with Zee. “In the beginning, most of [my subjects] are not comfortable — even actors.…Before I shoot, I stare at their face, their outside…I’m a little bit like a doctor.”

She most likely inherited her doctor-like approach from her mother who is one. Her father is also a graphic designer, though Man said he worked a “regular job” to bring in a steady income when she was younger.

Man is known for her heavy use of post-production, which, in a time when celebrities are constantly calling out publications for Photoshopping them, is quite controversial. “I treat every picture like art pieces,” she reasons. “The people in the fashion industry or art industry cannot define me.”

Part of the controversy over post-production is that it can create a sense of unattainable beauty. Man recognizes this, but also said her use of it really depends on her audience.

“The thing is we are not so perfect,” she said during the Q&A. “That is beauty. Perfect, you have to accept imperfect. That is perfect.” She’ll typically forego retouching when shooting for Western publications, but not for Chinese ones. Chinese culture, she said, wants to see a more idealized form of beauty.

Man’s portfolio includes a number of design collaborations, including ones with Canon, MAC Cosmetics, Muji and a forthcoming fall collection with Shang Xia, a Chinese brand backed by Hermès. She’s hesitant to name specific artists or designers that inspire her — when asked to do so, she actually let out a sigh. Her translator explained that she’s drawn to ideas, not people. There is, however, one person she openly admires: Michael Jackson.

“You cannot define him, label him or any of his stuff,” she said in the Q&A. “He’s between the young and old, boy or a man, between male, female, between black and white.…More important, he is positive to inspire young people and inspiring the world from a positive way.”

Whereas some see Instagram as the end of professional photography, Man embraces social media and photo-editing apps such as Facetune. She’s not at all bothered by the ease with which the average person is able to take a photo or video, and she’s hopeful for the future of the craft.

“Taking a photo in the future will be a ceremony,” she said.

This Is Ground Looks to Opportunity in Women’s Market

It’s Summertime, and The Outnet’s Off to the Beach