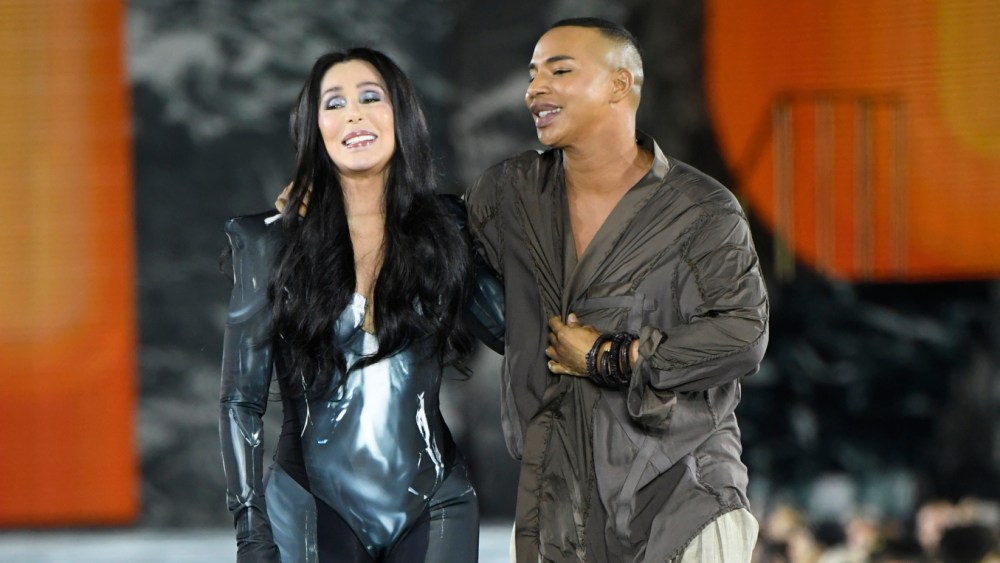 Balmain’s Olivier Rousteing knows how to stage a show. They’re part fashion parade and part celebrity spectacle, open to the public and always set to a thumping soundtrack.

But it was the final walk that got the biggest screams of the night, as Rousteing brought Cher — the original mononymous pop star — for a turn on the catwalk.

After 100 or more models, including Ashley Graham and Kristen McMenamy, paraded by in a mix of ready-to-wear and couture looks, Rousteing took to the stage for a solo strut, before Cher emerged.

Cheers roared through Paris’ Stade Jean-Bouin as the duo hugged and held hands on an elevated stage as they walked to her 1998 anthem “Strong Enough.” She sported a futuristic look of a sculptured silver body suit, shiny black leggings and chunky boots.

Rousteing praised her six-decades-long career in music and film, as well as her activism, and said the best way to sum it all was one word: “trailblazer.”

“Cher has been a daring pioneer, a true trailblazer, for over six decades, never slowing down, always pulling us along with her, as she courageously marches forward,” Rousteing said.

“’Style icon’ doesn’t come close to describing her achievement of defining more than a half-century’s worth of fashion’s trends. And, in this challenging age that compels us to fight for long-overdue changes, her impressive, long-term commitment to dedicated activism is an example to all,” he added.

Rousteing showed a softer side this season in runway looks that ranged from the earthy, featuring rich brown tones and material such as raffia, to the angelic, with cathedral paintings on flowing skirts and dresses.

It was an eclectic front row, or rather bleacher bench, showing that Rousteing’s influence goes beyond the fashion sphere. Soccer star Neymar sat in the front row in a sparkly jacket, while photographer-slash-chef Brooklyn Beckham made an entrance so late he couldn’t take a seat. The two shared an embrace before Beckham exited quickly backstage, where Kylie Jenner was also hanging out.

Holding a fashion show at a soccer stadium is more than spectacle, it’s a political statement.

“It’s so great, because I think [fashion] has been behind the velvet curtain for so long. And just to make it more accessible I think that’s what culture wants. The world wants everybody to be together and viewed the same way, and I think it’s beautiful that he chose to do it this way.”

After dropping her singles “Breakfast” and “Boyfriend” earlier this year, actress-turned-singer Dove Cameron spent the summer attending a songwriting camp to work on her upcoming album.

While she grew up on screen as a Disney star, her parents were both designers, which influenced her greatly. “The fashion and design world were always a part of my consciousness and the zeitgeist of my mind,” she said. It’s one of the things that led her to Balmain, which blends the masculine and the feminine and plays with the idea of power.

Those themes reflect in her music, with the gender role-bending singles “Breakfast” and “Boyfriend” released earlier this year. The music industry has been surprisingly empowering, she said. “I’m really finding myself in this industry in a way that wasn’t sure I ever would, because I’m a very anxious person. I had a lot of self hatred and imposter syndrome,” said Cameron, who won an Emmy during her early acting career.

“Now I feel very much like I have my feet on the ground in the [music] industry in so many different forms that I feel comfortable. It’s an amazing thing that Columbia trusts me with it, but at the same time, it’s the only person I’m beholden to is me, which actually can be worse. Like you’re calling all the shots or whether it fails or it flies. It’s down to you.”

She spent the summer at a songwriting workshop to put the finishing touches on her upcoming album. The next single should be out in October, before the full album next year. She’ll also be the Valentino show later this week as fashion week rolls on.