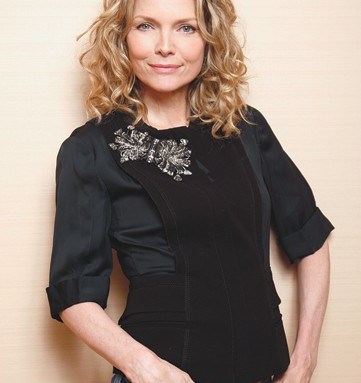 Even in the new film “Cheri,” Michelle Pfeiffer still looks more movie star glam than the over-the-hill French prostitute she plays. But that doesn’t mean the actress is immune to everyday insecurities. “When I read the script, I said to myself, ‘OK, well, you’re turning 50 this year and you’re really heading into the eye of the storm with this one,’” Pfeiffer says. “Then I was working too hard to really think about what was happening. [My birthday] kind of came and went and it wasn’t a big deal. Honestly, it was a huge relief when it was over because you realize nothing changes.”

Not so, however, for Léa de Lonval, Pfeiffer’s character in the Belle Epoque-era film, which hits theaters June 26. De Lonval is a once-renowned Parisian courtesan, who, face-to-face with her own diminishing social value, fleeting beauty and inevitable loneliness, embarks on an affair with Chéri (Rupert Friend), the listless son of a fellow courtesan and 30 years her junior.

“I think [Léa] is still holding onto youth,” says Pfeiffer, who lives in northern California with her husband, “Ally McBeal” creator David E. Kelley, and their two children. “I mean, I’ve certainly let go of that. One of the things that turning 50 has done for me is that it’s been liberating to go from this pressure to stay looking young to, ‘I look good for my age.’ It’s a different and much healthier mind-set.”

Over the last three decades, Pfeiffer has appeared in more than 30 films, starting with her role as gum-chomping Pink Lady Stephanie Zinone in 1982’s “Grease 2.” Her iconic turn as Tony Montana’s feisty gal pal Elvira Hancock in “Scarface” followed and led to roles like lounge singer Susie Diamond in “The Fabulous Baker Boys” (for which she took home a Golden Globe), Catwoman in Tim Burton’s “Batman Returns” and Countess Olenska in Martin Scorsese’s “The Age of Innocence.” “Chéri” reunites her with “Dangerous Liaisons” director Stephen Frears. “[Michelle] was suggested very early on — within minutes, as it were,” says Frears. “She’s a very good actress, very powerful. And compellingly beautiful — quite extraordinarily beautiful — and then she’s very human underneath it all.”

These days, most of the roles coming across Pfeiffer’s desk are those of older women who are romantically involved with younger men. (She also starred in “I Could Never Be Your Woman,” opposite Paul Rudd, and “Personal Effects” with Ashton Kutcher.) “It’s becoming socially more acceptable, but it’s still enough of a taboo to where it’s kind of titillating for people,” she says by way of explanation. “And I’m the right age.”

Which, gravity aside, does have its perks. “I don’t feel the need to really prove myself anymore,” says Pfeiffer, now 51. “I do what I want to do and I do it because I love it. I think, as a result of that, I enjoy the process more.”