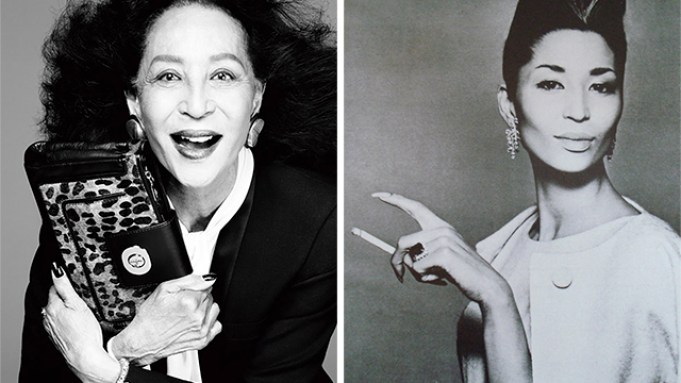 China Machado on a recent afternoon pulled a wheeled suitcase with one hand and balanced a box of fashion samples in the other as she circumnavigated the lobby of The Marcel hotel in Gramercy Park. At 87, Machado has a full dance card of projects, including designing a collection of easy pieces for Chinawear.com, launching on Oct. 15, and organizing “A Muse Among Friends,” a photography exhibit documenting her six decades as a model and bowing Oct. 3 at the National Arts Club.

“They came after me,” said Machado, in her lilting voice, referring to the Arts Club. “I had not expected this. I don’t want to be narcissistic. I think of it more as a history of fashion.”

The first non-Caucasian woman to be featured on the cover of a fashion magazine — Harper’s Bazaar in 1959 — Machado has been photographed by a who’s who of lensmen over the years, most recently, Steven Meisel for Vogue Italia’s March issue.

Machado said she fell into modeling after moving to Paris in 1954 to live with a friend, who was in the business. Told that Cristobal Balenciaga needed girls, the designer was out of town when she reported for work the next day, and she was sent to Givenchy instead.

“I had never modeled,” she said. “I just followed the girl in front of me.”

Machado caused a stir in Paris with her regal, unconventional beauty.“I never thought I was good looking because nobody else looked like me,” said Machado, who was born in Shanghai to a Portuguese mother and Macanese father. The fashion world disagreed. Oleg Cassini in 1958 saw Machado on Pierre Cardin’s Paris runway and offered to fly her to New York to walk in one of his shows.

“The day I arrived, I saw Diana Vreeland, [legendary editor of Harper’s Bazaar]. The next day, almost, I was in Dick Avedon’s studio,” she said. “He made my career. Avedon broke all the race barriers. We were friends for 50 years.”

Machado said she never knew of Harper’s refusal to publish her photograph until Avedon told her 20 years ago, saying he gave the magazine an ultimatum: print the photo or he’d quit his contract.

Avedon photographed Machado for three years, before she joined Harper’s as senior fashion editor. She eventually became fashion director, staying at the magazine for 11 years. Machado in the Eighties helped Frances Lear launch her eponymous magazine, geared toward women over 45. “She was a manic depressive and could have extreme mood swings if her chemical balance was uncontrolled,” Machado said of the late Lear. “She was obsessed with sex. I had 25 percent of the magazine. If it had made money, I’d be rich, but it lost $50 million.”

Machado has a talent for reinventing herself. “I’m a survivor,” she said. “If there’s an opportunity, I’ll take it.”

For a while, she designed hand-knit sweaters. Then, she opened a general store in Watermill, N.Y., selling children’s clothes and gifts. When she subsequently sold the store to an antiques dealer and he reneged, she turned it into an art and photography gallery. An artist herself, Machado paints enormous murals. Cooking is also a longtime passion.

Like Carmen Dell’Orefice, who is now 85, and found modeling work late in life, and Iris Apfel, the 95-year-old darling of the fashion industry, Machado returned to posing in front of the camera in 2010 for a W magazine story shot by Bruce Weber. She appeared in 2013 in Cole Haan’s ad campaign with line, “Born in 1928,” in honor of the brand’s 85th anniversary.

Machado has had a colorful life. She was in her teens when her family during World War II was forced to leave Shanghai for Buenos Aires and Spain. She ran away to Rome at 20 with Luis Miguel Dominguín, the most famous bullfighter in the world at the time. “It was a very fast-living life,” she said. “You’re traveling all over the world. He knew everybody.”

Eventually, Dominguín left Machado for Ava Gardner. “I cried for two years over a man,” she said. “Never again.” Among Machado’s few regrets is not trying harder to make her marriage to actor Martin LaSalle work. Of her relationship with Jack Nicholson, with whom she cavorts in a Seventies-era photo shoot, Machado said, “We were great pals. He made me laugh.”

Machado, who claims she’s never had a face lift, let alone visited to a spa, swears by Ponds cold cream. Said she now appreciates how much her non-traditional beauty contributed to her career. “I was lucky that I didn’t look like everybody else,” she said of her early modeling days.