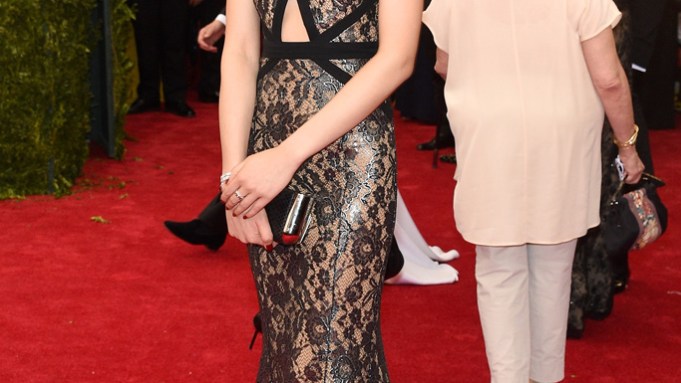 The novel offers a second helping of the social-climbing, jet-setting, wildly scandalous world that propelled Kwan’s first book to the top of the New York Times bestseller list. With one exception — somehow it manages to outstrip the earlier work’s excesses.

The novel, due out in June, appears against the backdrop of a Chinese nouveau riche that is more prominent on the world stage than ever before. At the Costume Institute’s annual gala Monday night, many of the real-life inspirations for Kwan’s characters — most significantly, Veronica Chou, the daughter of textile tycoon Silas, who is known as Araminta Khoo in the series — and many who are not were among the army of young, wealthy Swans ascending the red carpet.

Kwan sets the new novel in 2014, two years after readers first entered the lavish and over-the-top world of the Asian elite. Its most beloved characters are back.

Rachel Chu is about to marry Nick Young, the Singaporean heir to a vast fortune who’s the country’s — nay, the continent’s — most eligible bachelor. His family is still thumbing its nose at her middle-class roots when she returns to Mainland China and discovers, as one might expect from the title, she is not as plebeian as she thought.

Then there’s Cantonese soap actress Kitty Pong, inspired by the former bad-girl actress Cecilia Cheung, who learns her husband’s newfound money doesn’t quite buy access into the most exclusive recesses of society. The character of Colette Bing, an “It” girl who is in no rush to get married, is loosely based on Yao Chen, the actress who boasts 78 million fans on Sina Weibo.

“Because the nexus of the book really shifts to Shanghai, you’re seeing a different species of crazy rich Asians,” Kwan says. “These are the China rich and I think at least for me, I’m so impressed by Shanghai and how all of China continues to evolve. On a style level, you’re seeing this increased sophistication and brand awareness. You’re seeing more and more people who are eschewing the bling and putting on meaningful outfits, creating their own chic and their very own distinctive style.”

While snobbery against new money — especially overnight fortunes — featured prominently in the first novel, it seems much of the bias has worn off, a reflection of the real world’s startling pace of change in China.

“It has so much to do with the purchasing power of Mainland China these days,” Kwan says. “In many ways, it is the foundation of the tourist economy in Hong Kong, Singapore, even Dubai and New York. You see them everywhere now.”

One of the pleasures of Kwan’s writing is its savviness about the latest current events, and in his latest novel, sharp readers will notice the heroes learning to navigate a whole new set of social rules beyond their control, namely the crackdown on corruption and expensive gift-giving that began with the induction of current Chinese president Xi Jinping.

“I’d say we’re at the height of the anticorruption crackdown,” Kwan says. “In very subtle ways, I already implanted that in the book in that the display of wealth had become more private. In the plotline, there’s a lot of concern — especially if they’re the children of political figures: What the perception is in the media, how they’re perceived, whether they’re being seen too much or associated with the naughtiest scandalous things that they get in my book. You’re seeing the parents freaking out.”

When Kwan wrote the first novel, he meant it as a piece of social satire, a biting commentary on a rapidly changing society. But much like “The Official Preppy Handbook” before it, the book has unexpectedly been co-opted by the hoi polloi as an aspirational guide to moving up the social ladder. A movie adaptation of the series is also on the way “this year, if all goes well,” Kwan says.

“I’m really highly amused by this phenomenon,” he says. “My [film] producer Brad Simpson had mentioned that in Hong Kong, he met about 10 women who claimed to be Astrid Leong. Everyone wants to be Astrid and that’s a good thing.”

Zhu Zhu
A former MTV VJ and singer with her share of high-profile boyfriends — like Lapo Elkann — she’s made the leap to acting, most recently with the Netflix series “Marco Polo.”

Zhou Xun
A Chanel ambassador who moonlights as an actress (or is it the other way around?), she has been described by Karl Lagerfeld himself as a “young Coco Chanel.”

Liu Wen
Wen managed to be noticed in Yongzhou, a city of more than five million, and has gone on to become the country’s most successful model.

Tang Wei
She vamped and smoldered, and showed a lot of skin, in her debut film, Ang Lee’s NC-17 “Lust, Caution,” and has been a star ever since.

Bao Bao Wan
Her grandfather was Wan Li, a former chairman of the National People’s Congress. She now designs extravagant jewels that are not quite for the people.

Ni Ni
Plucked from obscurity by filmmaker Zhang Yimou for “The Flowers of War,” she held her own against Christian Bale and has become a front-row fixture at Dior.