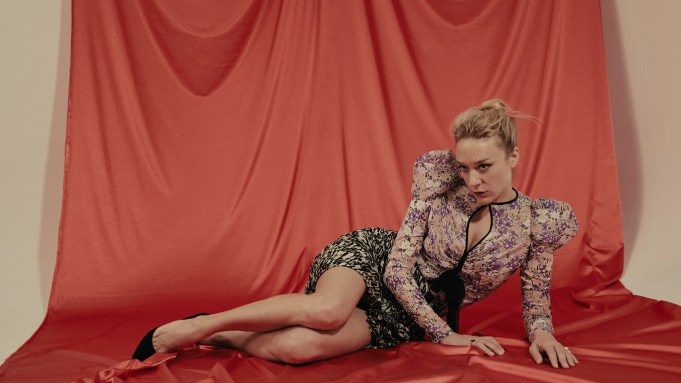 CANNES, France — “We’re going very Hollywood, very glamour, very chic. I’m not really about stunt dressing; people think of me as pushing the envelope, but I never think that I dress like that — that’s more Tilda’s department. She’s more esoteric in her choices,” says Chloë Sevigny, who tonight — flanked by her costars Tilda Swinton, Adam Driver and Bill Murray — will mount the red-carpeted steps of the Palais des Festivals to present the world premiere of the 2019 Cannes Film Festival’s opening movie, Jim Jarmusch’s “The Dead Don’t Die.” Her choice of outfit at press time: one of two custom-made looks by Mugler’s Casey Cadwallader.

Once in her seat, following the opening ceremony that presents the festival jury headed by Mexican director Alejandro González Iñárritu, Sevigny will watch the finished film for the first time alongside a room full of industry heavyweights.

There’s not much risk of it being panned, though, given indie stalwart Jarmusch’s track record and the rock ‘n’ roll supporting cast spanning Tom Waits, Iggy Pop, Selena Gomez, Luka Sabbat and the Wu-Tang Clan’s RZA.

Sevigny was given the opportunity to attend a pre-screening of the movie, which is billed as a zombie-apocalypse comedy with environmental and political messages, but opted to “stay in my ignorant bliss” and wait until Cannes. “It’s such an experience to have it play there, and the adoration and applause and whatnot afterward — usually, that is,” she quips during a phone interview a few days before the event.

“I forgot I was even acting. I was just watching her,” says the actress on the experience of working with Swinton, who plays a Scottish mortician with a thing for Japanese swords. “She’s so gentle as a human to be around. Very encouraging — a beautiful creature.”

Sevigny, alongside Driver and Murray, plays one of three bespectacled local cops trying to defend the sleepy town of Centerville in New York State from flesh-eating zombies, and the film marks her third time working with the director after “Ten Minutes Older: The Trumpet” in 2002 and “Broken Flowers” in 2005.

With two shorts under her belt and a third — “White Echo” — competing for the short film Palme d’Or at the festival, Jarmusch’s is a career she’d like emulate. “He sent me the script and said, ‘I have this part. She’s the scream queen, she’s not like the feminist, powerful women in the story. She’s the trope of the girl in distress.’ Being a big fan of his and hearing about the other cast members, and reading the script, I wanted to be involved. It feels good to be spoken of in the same breath with people like that,” Sevigny says.

Regarding what differentiates Jarmusch from other director greats in terms of the tone on his sets and the delivery of lines, “there’s just a real disconnect that’s very specific to him,” she says, adding wryly about the film’s zombie-comedy tag, “If you know his sense of humor, it’s easy to wrap your head around.”

Being in the festival’s opening night film has meant having myriad fashion houses vying to dress Sevigny, “when there is in fact lots of other stuff to attend,” says the disciplined dresser, who is coming prepared for the week.

“It’s a lot of work in a short time, a big push,” says the actress, who will be traveling with just a carry-on and having her wardrobe shipped — as “gluttonous and disgusting” as it sounds,” she adds with a laugh.

Despite having risen to indie fame as a pre-street-style natural-born influencer, for big events she now works closely with stylist Haley Wollens. “It just takes some of the stress off. I’ve done it my whole career myself and it’s just like, finally meeting someone [who] gets me, that I can put my trust in. It’s really collaborative between us,” Sevigny says.

As for her current mood: “I think, being 44, it’s like that transitional phase. I want to go for chic but still a bit alternative.”

She confesses a case of Cannes jitters, even if her films presented at the festival over the years have been of the carapace-forming variety. None of the cast was present for the screening of her first film, Larry Clark’s “Kids” at the festival in 1995 — “They wanted to maintain this idea of us all still being out there on the street” — but in 2003, Sevigny had to face the flak after a non-simulated graphic scene between herself and costar and director Vincent Gallo in “The Brown Bunny” caused uproar.

She has been consistently unorthodox in her role choices, with among her other Cannes films Lars von Trier’s “Dogville” and the R-rated “Demonlover.” Helmed by Olivier Assayas, the neo-noir thriller featured a soundtrack by Sonic Youth, which cast the actress in its 1993 video for “Sugar Kane,” marking her first appearance on film. (It sees a crop-haired Sevigny walking the streets of New York before entering the Perry Ellis studio, where she strips off and gatecrashes a fashion show butt naked — albeit with her private parts barred — surrounded by models dressed in Marc Jacobs’ notorious grunge collection.

Shortly before that, Sevigny was spotted on the streets by Andrea Lee Linett, the fashion editor of Sassy magazine, who asked her to star in a commercial they were shooting for “The Jane Show.”

“I was outside of Washington Square Park in some crazy hat, wingtip steel-toe Doc Martens and overalls,” recalls Sevigny, who went on to intern for the magazine. “I was spotted by other people on the street, too, and did a shoot for, like, i-D magazine. That kind of kept happening just because I dressed so crazy,” adds the actress, who still keeps her stack of “old Faces and i-Ds from the Nineties” at her mom’s, even if she “doesn’t really look at magazines anymore.”

Growing up in Darien, Conn., her parents encouraged her and her brother — DJ, club owner and artist Paul Sevigny — to pursue their interests in the arts. “I was very into costumes and wearing, like, only a Wonder Woman swimsuit all day, every day, and sequins and crazy outfits. I came out of the womb into adornment. It’s an innate thing I’ve been exploring my whole life,” says Sevigny, who despite being very much focused on film is still intensely enamored with fashion. She walked in Simone Rocha’s fall 2019 show last February, has a bag launching with Chopard in Cannes and a denim collection for Opening Ceremony’s Tokyo store in the works, while other undisclosed projects are in the pipeline.

“My mother got me a Fisher Price sewing machine when I was a kid. I was interested in dolls’ clothes, but I just had a thing for style. My father was always stylish, as were my mom and my brother,” she says. “There was always a thing around taste, being exposed to things.

“I always dressed kind of wacky. I was into other people [who] did, and into style and things I hadn’t seen before, and things that I could identify as being other than the norm. Where I grew up was very homogeneous, so it was more about things outside of that realm that interested me,” Sevigny continues, adding that while growing up her town’s proximity to New York, only 45 minutes away, was “very freeing.”

She still returns to her hometown regularly, and maintains a connection with the place, even if she was destined for bigger things.

“I got voted ‘Most Changed’ in the senior year book, and I hadn’t really changed. I’d just been consistently changing since fifth grade, exploring different styles and scenes. It didn’t surprise anyone that that was my trajectory, and I still go back all the time. I go to every high school reunion,” Sevigny says. “My mother lives in town. My brother lives there now.”

On reports of her being a descendant of the French aristocrat, the Marquise de Sevigny, she replies, with a chuckle: “It hasn’t been proven, but my brother desperately wants it to be true.”

In the #MeToo era, where women actors are challenging the system, what’s sure is that Sevigny’s star continues to rise. Among her upcoming releases is the directorial film debut of Melina Matsoukas’ “Queen & Slim,” due out later this year. “It’s a socially conscious movie, very entertaining, and I think it’s going to be wild,” Sevigny says.

But as she prepares to face the Cannes spotlight, Sevigny still has lots more to give. “You always want bigger and better roles. Maybe this will come,” she says.

Ditto for her work behind the camera. For Sevigny, shorts serve as a vehicle for ideas she wants to explore. (Building on the message of her first two shorts, she described “White Echo,” a 15-minute-long vampire film, as being about “a woman and her desires, and wanting to be recognized for something. And to recognize it in herself and be comfortable with that, and also have recognition from another.”) But she also sees her shorts as calling cards — through “learning more about camera, working with actors, how to tell a story” — for her first feature film, which she’s building up to.

“‘White Echo’ is deliberately conventional in the sense that I wanted to show that I could tell a story that people could grasp and it would be effective, in a more commercial way,” she says. “Unfortunately, I don’t have an idea for a feature yet, but I’m reading a lot, looking at a lot of things and trying desperately. But you know, ideas — you never know when where they come from. I’m waiting patiently for that, but also trying to encourage it.”