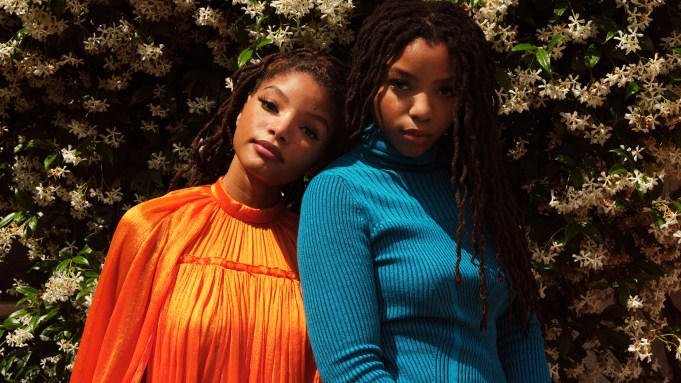 Your early 20s are not generally known as a time of great wisdom, understanding of your own emotional health and giving yourself grace to come of age. Yet Chloe and Halle Bailey, 21 and 20, respectively, are far more centered and in touch with their own growth than many of their peers. And they’re particularly skilled at being able to translate that into music, as seen through “Ungodly Hour,” their sophomore album, which was released last week to much fanfare and positive reviews.

It’s no wonder why Beyoncé plucked the sisters — better known as Chloe x Halle — out of obscurity after seeing their cover of her song “Pretty Hurts” on YouTube when they were barely teenagers and signed them to her Parkwood Entertainment label, drastically altering the course of their young lives and careers.

“This album, we’re baring our souls,” Chloe says. “We’re sharing our insecurities, showing our vulnerabilities, all of those things. We just want people to accept us for who we truly are. It’s like ‘love me at the ungodly hour.’ That’s why we called this project that. It’s that time when you’re not perfect. It’s that time when you’re struggling and it’s OK to struggle. There’s beauty in that.”

“And it’s definitely something that we’ve had to work at,” Halle adds. “A lot of the messages on the album, talking about and addressing insecurities and being OK with them, is really just us talking to ourselves, trying to mark these messages into our hearts and our brains. Because when we are feeling down, one of us is there for the other one to lift each other up. So, those lyrics in the songs are definitely messages to ourselves to cheer us up as well. If it can help other people and make them feel better, then that’s our goal.”

The sisters are on Zoom, each from their respective bedrooms in the house they share in Los Angeles with their parents and younger brother. Chloe’s just finished a HIIT workout while Halle cleaned her bedroom (Chloe admits some tidying is needed in hers as well). The Baileys have been in lockdown at home since March, listening to gospel (Chloe) and Marvin Gaye (Halle), watching “Love Island” and the Michelle Obama documentary, “Becoming.”

“It’s been a journey. In the beginning, it was like a fun sleepover; we can’t leave the house. And then, it kind of kicked in for us like, ‘Whoa, this is real,’” Halle says. “This is really heavy for us all. We’re all just trying to stay safe. With the recent events that have been happening over the couple of weeks and all the protests, we’ve just been so grateful to be alive, and we’ve been clinging to each other, and remembering to be grateful for every small thing, and trying to stay positive and hopeful.”

Both sisters have the immediate, natural ability to be utterly grounded in the severity of something — the Black Lives Matter protests that have followed the Minneapolis police killing of George Floyd — paired with hope. It’s hard not to feel positive, inspired and hopeful after conversing with Chloe and Halle, who are wise beyond their years and see themselves clearly.

“Ungodly Hour” was set to be released on June 5, but the sisters said in a video posted to Instagram earlier that week they decided to push the date back to June 12, in light of the protests against police brutality that began to capture national attention around that time.

“We were kind of numb in a way,” Chloe says. “We were feeling very overwhelmed and saddened by everything, but also hopeful because the youth were raising our voices. We’re really making a change. You could visually and physically see that. We felt like we should just put all of the attention on using our platform to shine the light on the injustices of our people. We didn’t want to make this moment about us that week. Music is healing and all we ever want to do is heal with our voice. But, we said, ‘Let’s just wait a week. It’s just one week. Let’s put our attention on the problems and the issues that matter the most to us right now.’”

“Whenever something as traumatizing as what went down happens, whenever somebody can see a man get murdered in the street, that’s traumatic,” Halle says. “We think about how that could have been our father, that could have been our little brother, that could have been our uncle — so it’s really hard for us to swallow that pill. With everyone raising their voices and using social media for the better and to try to get justice for George Floyd and Breonna Taylor and all of the others, it’s a beautiful thing. People can now see what has been happening for a very long time. For that, we are grateful. But at the same time, it’s very sad. It’s very traumatizing. We just try to hold our loved ones close and remain hopeful during this time, even though it’s hard. All we can do is try to use our platform to speak on the things that matter to us and try to get justice for those who need it.”

Chloe x Halle released their first album, “The Kids Are Alright,” in March 2018, when they were teenagers. The album took three years to make in part because, Halle says, “we were still trying to find our sound, and growing.” The new album, then, finds them much more confident in who they are and the sound they’re putting out.

“It felt more like we know who we are and we’re just sharing our experiences of what’s happened in our life,” Halle says. “The album takes you on a journey of all the ups and downs of womanhood and insecurities, and not knowing if you’ll be OK being by yourself, and then all of the relationship problems or relationship fun times. It’s all in there. I feel like it was much easier for us to do for this album because we had so much more to share and we knew more about who we were.”

“The Kids Are Alright” was created in the living room of the first house the family lived in after relocating to L.A. from Atlanta. After moving into a new home, the garage was converted into a studio. Though “Ungodly Hour” had more outside hands involved than the first record, it always came home at the end of the day for the sisters’ final touches. (They both executive produced the album and cowrote each song, with Chloe producing 10 of the 13 tracks.)

“I loved it because after we created the music with them, we were able to take the stems back home to our home studio and layer more of our harmonies into the song, and really add pieces of us that made the song feel like my sister and I,” Chloe says. “It was really collaborative. But we still executive produced it. We had our hands in everything on this album.”

Which is, of course, of note in an industry dominated by men. Halle says whenever they’d be in studio sessions with any major male producer, the fact that Chloe had made the beats always drew shock.

“They’re like, ‘What? You do that? This little girl, you did what?’” Halle says. “That’s always my favorite thing to see.”

It’s a confidence they’ve seen play out from their mentor, the one and only Beyoncé.

“Not only is she a fantastic musician and artist, but she is a wonderful businesswoman,” Chloe says of Beyoncé. “She knows what she wants and she’s not afraid to say it. She’s not afraid to be a perfectionist. That is very inspiring to me because a lot of times, women are seen in a different light when they are a boss and when they take leadership and when they raise their voices. But she has never been afraid of that. It’s so empowering for us as young women to see that and one day become that, and not be afraid to raise our voices and speak our minds, and speak up in business meetings and these conferences, and all that good stuff.”

Much about future projects remain suspended, but each sister has solo acting projects on the horizon (they star together in “Grown-ish” on Freeform). Halle made headlines when she was cast as Ariel in the upcoming live-action “The Little Mermaid,” which was shooting in London until the pandemic shutdown, and Chloe will be seen next in “The Georgetown Project” with Russell Crowe. Acting was their first love and they aim to pursue both simultaneously. But for now, in this moment, the focus is on music and how it acts as an instrument for positivity.

“One thing I know for sure, music is a universal language. No matter what anyone believes, music always, for some reason, gets through to them. So for my sister and me, it’s been very important for us to share our voices, to bring some healing, as well as to sometimes wake people up to things that need to be heard,” Halle says. “That’s all we can do with what we’re given.”

Nasty Cherry, a Band Formed by Charli XCX, Is Thrown Into the Beast Called Fame