Acting as "godmother," Charlize Theron presented the coveted prize to Anya Taylor-Joy and George MacKay at a ceremony at the Chopard terrace in Cannes. 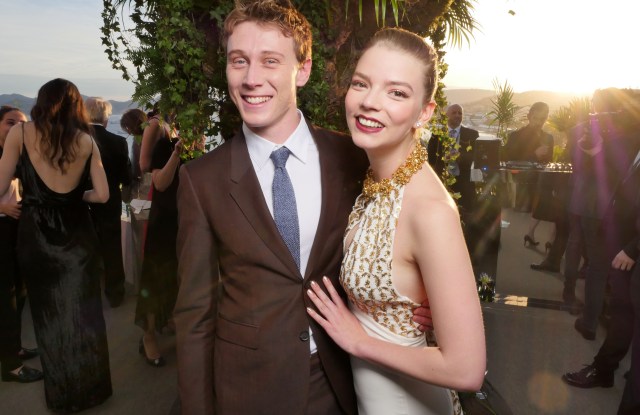 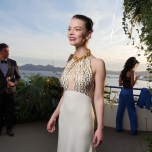 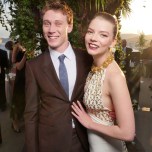 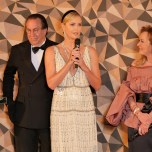 “You’re the ones who are going to be the future of our industry, and you’re also the ones raising the bar for actors like myself and everyone else in the industry. Thank you for making us better, and thank you to this festival for supporting young talent like you two guys,” said Charlize Theron, who on Monday night adopted the role of “godmother” for the presentation of the 2017 Chopard Trophy award for promising young actors to laureates Anya Taylor-Joy and George MacKay.

By coincidence, this year’s winners are already bosom buddies, having starred together as the leads in Sergio G. Sánchez’s first feature film, “Marrowbone.” MacKay is British and based in London, while Taylor-Joy was born in Miami, grew up between Argentina and England and is based “wherever the film has been for the last three years,” having shot eight films back-to-back. They include Josh Boone’s “X-Men: The New Mutants” and “The Sea Change,” directed by and costarring Kristin Scott Thomas. MacKay, who was a tour de force in Matt Ross’ “Captain Fantastic,” is filming Claire McCarthy’s “Ophelia,” in which he plays Hamlet.

WWD sat down with each of the actors to talk films and futures.

WWD: Have you been to Cannes before?

Anya Taylor-Joy: Never. And I really do mean it when I say that I was on set shooting continuous days for eight weeks [for the BBC TV series “The Miniaturist”], and all of a sudden I woke up and I was here and someone put me in a dress and then Charlize Theron handed me a trophy. Surreal, I think, is the word.

WWD: You were born in Miami but grew up between England and Argentina. What nationality do you feel?

A.T.J.: I’m a mutt, an absolute mutt. It’s an interesting question and one I’ll be pondering for a very long time. I feel different parts of myself in different places. When I’m in Argentina, I really feel a connection to the Latin warmth, and that’s something I take everywhere I go. I’m a big hugger, I don’t really do handshakes.

WWD: And you were a ballet dancer…

A.T.J.: Yes, from three to 15, you start real young. I did love it, but I got tall and quite booby very fast and so that dream flew. But I will say that it’s trained me for this; the heels, the way you hold yourself, it’s helpful.

WWD: What did you wear to the Cannes premiere you attended with George MacKay on Sunday?

A.T.J.: Burberry; we both wore Burberry. It was accidental, but it really worked. Gucci, Prada, Miu Miu and [Alexander] McQueen have all been very kind to me. I’m in Miu Miu tonight, though this is very classical for me. I’m usually more punky.

WWD: Tell us more about the general look you go for.

A.T.J.: It depends on the character, because I change my hair color every three months and so, obviously, that changes the whole palette. In the winter I tend to look like a boy; I’m always in trousers and my hair is all scraped under a beanie and I’m all in black. In the summer, I turn into Stevie Nicks.

WWD: You have a main role in Kristin Scott Thomas’ first feature film.

A.T.J.: What a woman. I met her in Paris and I had green hair as I’d just come from a shoot for a W couture cover, my first cover. And I just remember walking up and thinking, I can’t believe I’m going to be meeting this amazing woman and I’ve got bright green hair, what am I doing with my life? And she was so cool and inspirational.

It’s a really beautiful film, it feels quite French to me, actually. It’s this woman and man who are married but have this very tumultuous relationship. They love each other, but they also hate each other. She decides to take some time off after an incident occurs and go to Greece where they used to summer together and decides to take a companion, and she just sort of picks me up because I’m one of her friend’s daughters. Then everyone ends up coming to Greece and stuff goes down.

WWD: What triggered your desire to become an actress?

A.T.J.: I don’t ever remember wanting to do anything else. Yesterday my mom showed me this video of me as a very precocious, annoying five-year-old — it made me quite emotional, actually — and she says to me: “What are you going to be when you grow up?” And apart from the side that I said I wanted to be a marine biologist, because I thought I could act and be a marine biologist at the same time, I said to her, “I’m going to be an actress.” And she said to me, “Are you going to go to drama school?” And I said, “No. I’m going to be in the right place at the right time.” And thank God it worked because I got picked up on the street, literally.

WWD: Which street would that be?

A.T.J.: I got scouted for modeling when I was walking my dog outside Harrods, and I actually thought the car was trying to kidnap me. I kept going down these side streets and the car kept following me. I panicked and started to run and [Storm founder] Sarah Doukas stuck her head out the window and said, “If you stop, you won’t regret it.” Then I met [actor] Allen Leech on my third photo shoot and he asked me to read some poetry and connected me with his agent, and that was it.

WWD: What inspired you to get into acting?

George MacKay: I always loved drama. I was really lucky with the amount of film and theater I saw growing up, but my first job happened at an age when I wasn’t considering it. I was 10 and still at school and a casting agent called Shaheen Baig picked out a bunch of boys to go back to her workshop. She was doing the casting for a film called “Peter Pan,” so was going around schools looking for Lost Boys, basically.

WWD: Any other triggers?

G.M.: I guess among the experiences that made me really want to go into acting, I worked with an actor called Eddie Marsan when I was 19 who was such a master of his craft, and such a cool bloke. It was really inspiring to see you can be a fantastic actor without being pretentious, and that it’s OK to work at it as well. It was amazing how he took his work so seriously, but not himself, and that was such a simple equation that I hadn’t yet got my head around. It inspired me to want to get better.

WWD: Is it fun for you to win the Chopard Trophy award with Anya Taylor-Joy with whom you worked on “Marrowbone?”

G.M.: Yes, to be going through all of this with her is amazing. It’s just lovely to share it with a mate. I feel thrilled, really honored and humbled to be here. It’s kind of overwhelming getting to meet someone like Charlize [Theron], whose work is so amazing. To be given the award from her in person was really something.

WWD: You got to attend the premiere of “The Meyerowitz Stories” on Sunday night in Cannes, which got a standing ovation. How did you like it?

G.M.: I really loved it. It’s a very quiet film. Looking at the reaction of the filmmakers who we were sat quite close to, and obviously the final product itself, I think it feels quite poignant to the people making it, maybe at the stage of life that they’re at, and that comes through in their quiet performances.

WWD: What did you wear to the premiere?

G.M.: Burberry, much like my suit today. I’ve always want to have a brown suit. I’m a happy man right now, blue socks and a brown suit.

WWD: You’re filming “Ophelia,” in which you play the role of Hamlet…

G.M.: Yes, it’s a reworking of the story of Hamlet from Ophelia’s point of view. It’s being directed by an Australian director named Claire McCarthy and Daisy Ridley is playing Ophelia. It’s not in iambic pentameter, it’s not in Shakespeare’s words, because so much of it is reworked, but they’re not speaking as we are now, so it’s a sort of hybrid, I guess.

We’re filming in Prague at the moment. We stepped onto the set in a castle there the other day and it was all dressed out with the horses and everyone in the period costumes, and you walk on in your gear and it does feel, “Wow.” It’s set in a 14th century-esque world.