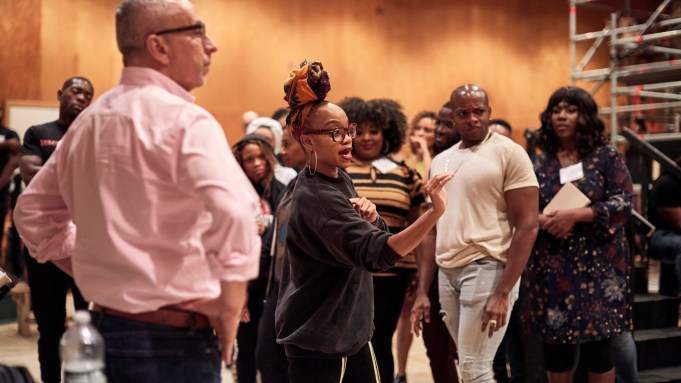 Camille A. Brown has had a marquee year. The choreographer and dancer earned her first Tony nomination for best choreography for “Choir Boy,” making her the first black woman to be nominated for the category in over two decades (Marlies Yearby was nominated for “Rent” in 1996). And this fall, she has two major revivals on the horizon: the Met Opera’s season-opening “Porgy and Bess,” which marks Brown’s debut at the major arts institution, and Ntozake Shange’s influential “For Colored Girls Who Have Considered Suicide/When the Rainbow Is Enuf” at the Public Theater. She’s also choreographing a piece for Alvin Ailey’s upcoming season at City Center and working with director George C. Wolfe on the film adaptation of “Ma Rainey’s Black Bottom.” There are two tours on the horizon, too: for “Once on This Island” and her namesake company, Camille A. Brown and Dancers, for which she continues to dance.

In short, she’s never not moving.

For Brown, who grew up and still lives in Queens, the significance of “Porgy and Bess” extends further than just the surface-level prestige of the Met: the show features an all-black cast, as it did when it premiered in 1935. Although controversial, it offers a reflection for creatives who don’t always see themselves represented on prestige stages. Brown offers an anecdote about one of her college classmates from University of North Carolina School of the Arts, who lived across the hall from her.

“Just in terms of diversity, it was hard to see a lot of reflections of herself,” Brown says. “I hope she can see this and know that opera people who look like her are out here in large numbers.”

“Porgy and Bess” has a more than 90-person cast; of those people, eight are professional dancers. Brown asserts that everyone, however, can dance. As choreographer for the show, part of her task was to provide the movement language and redefine what it means to be a dancer for the ensemble of singers.

“When we say technique, we automatically go, ‘oh ballet or modern,’ but I also believe technique is within social dance, it’s within the community, too,” she says. “There are many definitions of what it means to be a mover and a dancer and what technique is. And so part of my job is to empower everyone in the room, and make them feel confident about the movement language that they have in their bodies. Because we all have a movement language.”

To drive that point home, she worked with the ensemble to feel comfortable letting the dancers organically blend into the cast versus moving back when they started moving. Brown wanted the illusion that anyone onstage could have just as easily been one of the eight dancers.

“We should stretch our idea of what the definition of dance is, because if we are talking about turns and splits and things that people went to school for years to do — yes, of course — but if we’re talking about the community, which this is based on, and we’re talking about the dances or the rhythms or the movement and the interactions with people, then that is coming from the spirit,” she says. “So it’s really about digging into who you are and then being OK with letting that out.”

For one scene, Brown derived movement from Pentecostal Baptist Churches and the quick footwork that results from being moved by the Holy Ghost; she worked with her dancers to cut through the music with their pacing. “The spirit moves you to dance. So in this I’m trying to embody the same thing,” she says.

Brown has a solid understanding of her own distinct movement language, and credits that deep knowledge for guiding her process of setting the movement for revivals. Instead of paying homage to the works by reproducing what came before, Brown approaches each project with wanting to show gratitude to the lineage of dance history by adding her own voice.

“It’s good to know what people have done before, but it’s also important to bring out what I want to say in the piece, too, and contribute, move the conversation forward — versus, ‘we already saw that,'” Brown says.

She was contacted by Shange’s sister Ifa several years ago, after which the poet-playwright saw Brown’s company perform at the Kennedy Center, kicking off a dialogue about working together on the revival for “For Colored Girls.”

“[Shange] was interested in my movement language, and she really felt a connection to her work and my work,” says Brown. Shange passed away in October 2018 at the age of 70. “It’s sad because we were at the start of our relationship, but as Ifa says, [the relationship] is still going because I’m still involved in the works and her words. So we can keep our connection, but in a different way.”

While the choreographer and dancer remains busier than ever, Brown, who’s turning 40 this year, has been reflecting on the future. All of the various projects have pushed her to become a better leader. The flip side to having so many projects in the works is a fear of stretching herself too thin; she turns breaks into opportunities to schedule calls, or to rehearse for her upcoming company tour. But Brown seems driven — yes, by a love of dance and movement, but also by opening up possibilities for the next generation.

“Two months ago, I decided to go on Wikipedia and look up Jerome Robbins — just in terms of when people ask me, what is your long-term goal? — and so I was like, well, let me hit up somebody who had an amazing career,” she says. “And I looked at all of the stuff he did and said, ‘wow, that’s amazing, I want to do all of that.’

“But I don’t know if I’m going to be given the chance: because I’m a woman, and I’m black,” she continues. “I honestly didn’t think that I would be doing as much as I am now; I didn’t think I would get the chance. And the fact that I do have the chance is really exciting, and it’s also exciting to know that maybe a young girl can see a reflection of herself in me.”

From Madison to the Moulin Rouge: Karen Olivo Brings Satine to Stage