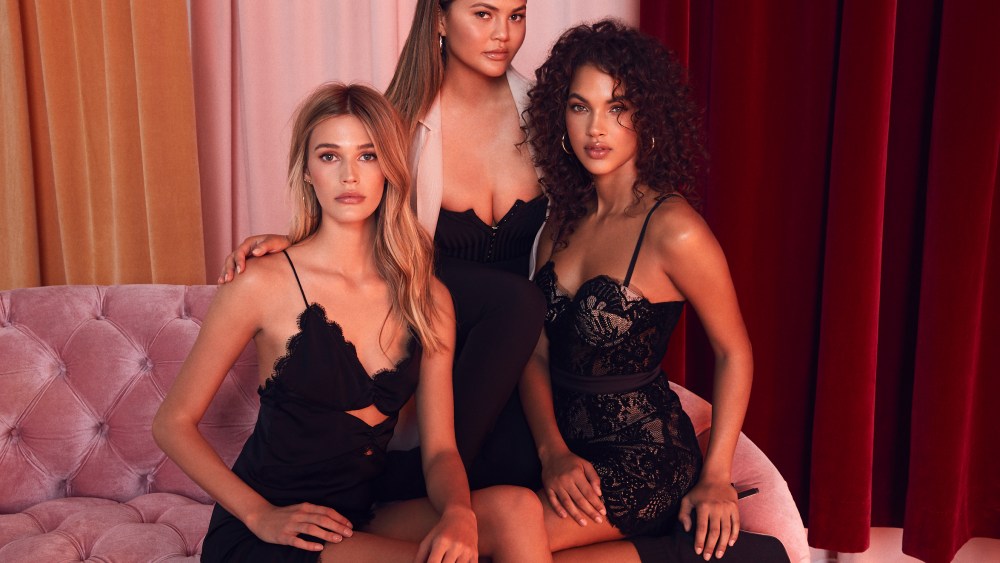 Revolve’s at it again with the launch of a new label done in conjunction with Chrissy Teigen.

The collection, called Chrissy Teigen x Revolve, is more than a year in the making and was first imagined before Teigen became pregnant with her now one-year-old daughter Luna.

Teigen, speaking with WWD on Wednesday morning ahead of a party to be held this evening to celebrate the collection’s official launch, said the idea for the collection was shelved for a bit after she found out she was pregnant, but little changed during that hiatus in what she wanted the collection to represent.

“What’s interesting is my style really hasn’t changed,” Teigen said. “The things that I love and the textures I love, they’re all really classic. So even though this has been a brainchild for so long, we’ve developed it into becoming more modern and cool, but it is still very much my style and has been my style for a long time.”

Revolve’s collaborating with influencers and other brands has been a key part of its broader growth and staying power, with a steady stream of new labels. This year saw the launch of a nightlife-inspired brand called H:ours and an exclusive capsule with MadeWorn and Roc96. Last year, the company launched beauty and linked with Alessandra Ambrosio and Nicole Richie on their own respective collections, while releasing new brands such as Grlfrnd Denim and Majorelle.

“I’ve been not just hosting Revolve parties, but going to Revolve parties for a very long time now in New York,” Teigen said. “I have very close Revolve connections because I really loved shopping on it, and there are a lot of women within the company I was actually friends with so it turned into a business venture.…This has been years in the making and it’s really incredible to see it go from mood boards and sketches to actually becoming pieces in a collection and in this [Revolve] Social Club. It’s really cool.”

The 36-piece Chrissy Teigen x Revolve offering includes a velvet lace bodysuit and dress, off-the-shoulder ruffle top, a wide-leg satin jacquard pant with side openings, shaggy coat with fringe detailing, thigh-high boots and stiletto booties. The palette is largely neutral filled with blush, sand and black. It is being sold through Revolve’s web site and is priced from $78 to $328.

Teigen pointed to a sheer duster and the velvet lace bodysuit she was wearing as some of her favorite pieces.

Teigen said the team has already begun planning for the next collection, and her other work is keeping her busy. She’s also in the midst of shooting for another cookbook, a follow-up to last year’s “Cravings,” and continues taping for the Spike TV show “Lip Sync Battle” on weekends.

“Everything is just constantly changing and it’s really cool,” she said. “It’s cool to be able to cook during the week, host amazing parties and launch this collection and then be able to hit up ‘Lip Sync Battle’ where my mind is blown every weekend.”

The Mighty Company to Bow on Melrose