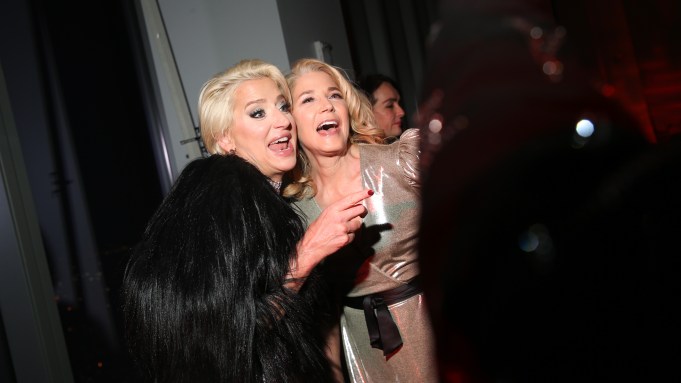 “One, two, three: how’re you feeling?” a photographer asked Dorinda Medley and Candace Bushnell as they smushed together for a photo op, baiting the pair to deliver Medley’s now-viral response of “not well, b—h!,” which they did happily.

“The Real Housewives of New York City” star Medley was fresh off a plane ahead of the show.

“I just got back from the Bahamas — I actually came back just for this,” she said. “I wouldn’t miss it because I just love him and I love his clothes.”

While she wasn’t dressed head to toe in the label, she was sporting one of Cowan’s beaded mesh tanks, which she said were her favorite, paired over a black bar and silver legging-type pants.

“I’ve always known about him. He’s so talented,” she said of Cowan, who she described as a friend forever.

“You know what I love about his clothes, they’re chic and elegant but they’re very retro still,” she said.

“They’re for everybody,” added Hedden, seated nearby.

“It reminds me of the Studio 54 days and the old school sequins,” Medley continued. “I think all ages can wear it — I mean, I can’t wear everything, obviously. But you know.”

After Cowan, she was planning to attend The Blonds show with Hedden, having recently scrapped plans to travel to Milan for the shows.

“I’m just hanging out, going to some great parties,” she said.

Finding ‘Happiness and Nostalgia’ Through the ‘Licorice Pizza’ Costumes