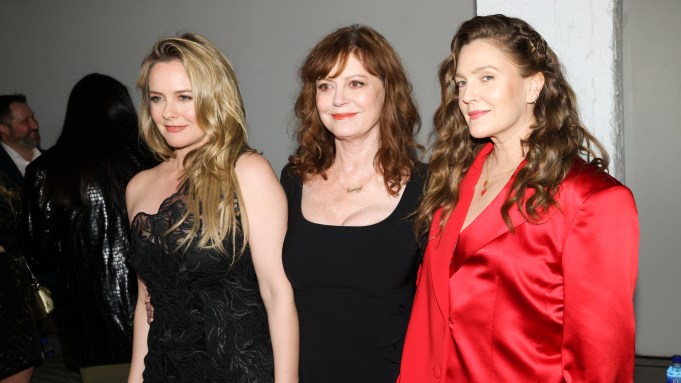 The basement of the Empire State Building saw perhaps its most glitzy crew ever on Saturday evening thanks to Christian Siriano and his front row VIPs. Descending the escalator down to the lower level, where the lengthy show took place, were the likes of Drew Barrymore and Alicia Silverstone, Siriano ubiquitors, as well as “Ted Lasso” Emmy winner Hannah Waddingham, in just for the show, as well as Danielle Brooks, Mj Rodriguez, Anna Chlumsky and Anika Noni Rose.

Also sitting front row was Susan Sarandon, to whom Siriano extended an invitation after a day of work together: the two are working on a look for her newest movie.

“I’m doing a film in a couple of weeks and he’s making an outfit for the film, which is a very important outfit because it’s worn throughout quite a bit of the movie,” Sarandon said from her seat. “And he said that this was happening and did I want to come. I think it’s going to be really special.”

The movie, which evades Google searches and IMDb, is a “domestic comedy,” Sarandon said.

“It’s a film with Diane Keaton, Richard Gere, Bill Macy, Emma Roberts and me,” she said, before stopping herself. “I don’t know what I’m supposed to say, but it’s filming in New Jersey so it’s nice that I can stay at home.”

Dorinda Medley Flew in From The Bahamas Just for Christian Cowan

Finding ‘Happiness and Nostalgia’ Through the ‘Licorice Pizza’ Costumes