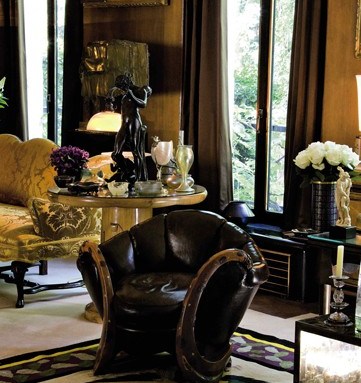 PARIS — Art collectors from the world over are expected to descend upon Paris this weekend for the auction of some 700 pieces of art accrued by the late designer Yves Saint Laurent and Pierre Bergé over 50 years.

Given that some of the pieces — “The Portrait of Mme L.R.,” by Brancusi, and Duchamp’s “Belle Haleine” — are the last known works by those artists in private hands, the three-day sale, which starts Monday, is expected to break records. And while the Brancusi and a Cubist-era Picasso are among pieces that have been down-valued since the auction was first announced last fall, Christie’s, which is organizing the sale in collaboration with Pierre Bergé and Associates, hopes it will still exceed 300 million euros, or some $380 million at current exchange. Christie’s already has given Bergé a substantial cash advance on the sale.

“Sometimes it’s better to buy a masterpiece, an important piece of art, than have money in your bank,” said François De Ricqlès, vice president of Christie’s France. “If it was a great drawing in 1980, say, when Yves Saint Laurent and Pierre Bergé bought it, it’s still a great drawing today and will be, in 10 or in 20 years’ time, a great drawing.”

Bergé, for whom the collection lost its significance when Saint Laurent died last June, said Wednesday he feels neither regret nor nostalgia on parting with the collection. “I am waiting to see how this sale will proceed with calm and with confidence,” he said, adding the scene unfolding in the Grand Palais, which is hosting an auction for the first time, is like a film. In 11 rooms, spreading more than 130,000 square feet, interior architect Nathalie Criniere has created an elaborate setting that includes replica designs of Saint Laurent’s salon and dining room. “I am dazzled. It’s extraordinary,” Bergé said of the overall effect.

While the media (some 200 journalists and 25 TV crews are expected to attend) has nearly run out of superlatives to describe what is most often referred to as “the sale of the century,” two pieces have gained plenty of column inches.

In recent weeks, China has increased pressure to halt the sale of two animal fountainheads, one of a rat, the other a rabbit, among 12 taken from the Summer Palace of the Emperor Qianlong in Beijing when it was looted by Anglo-French forces during the Second Opium War. A spokesman for China’s foreign ministry told a press conference in Beijing last week that the pieces had been stolen by intruders and should be returned to China, while a team of 80 lawyers is said to be preparing a lawsuit.

“We received nothing. No lawsuits,” reported de Ricqlès.

Christie’s has repeatedly insisted that all of the objects under auction, including the fountainheads, have a clear history of ownership. “We strictly adhere to any and all local and international laws with respect to cultural property and national patrimony of art,” the house stated.

“The Chinese would be better off taking care of human rights,” Bergé told WWD. “These pieces were indeed stolen, but it’s an affair that’s as old as the hills. It’s like the frieze from the Parthenon that’s in the British Museum in London. All the museums in the world are filled with Greek sculptures that were stolen. It’s nothing new.”

Chinese protests aside, huge queues are expected at the Grand Palais, which will be open to the public for two-and-a-half days, from 9 a.m. to midnight Saturday and Sunday, and from 9 a.m. to 1 p.m. Monday before the three-day sale begins Monday evening.

Private viewings have also been scheduled, including a soiree Friday for Bergé’s friends, former Saint Laurent couture staff, friends of the foundation and the AIDS charity Sidaction, plus a host of designers. Members of American Friends of the Louvre will also be treated to a private viewing Monday, followed by a Champagne cocktail hosted by the Duke and Duchess of Estissac Pierre-Louis and Sabine de La Rochefoucauld at their home near the Grand Palais.

Christie’s has nearly sold out of the 6,000 copies of the whopping 1,800-page, 10-kilogram, $290 catalogue box set, which includes portraits of Saint Laurent and Bergé plus photographs of the oeuvres juxtaposed in their various homes. It also includes essays by art historians and personal accounts from the gallery owners who helped build the collection.

Alain Tarcia recalls how Saint Laurent and Bergé bought “The Portrait of Mme L.R.” by Brancusi on the spot without any hesitation or negotiation. “Of course I was very surprised by how fast they made their decision,” Tarcia relates. “It’s not every day a customer comes into your gallery and walks out with a Brancusi.”

Brothers Nicolas and Alexis Kugel, meanwhile, tell how Saint Laurent famously challenged them. “One day he brought us a photograph of Marie-Laure de Noailles, taken by Willy Maywald, showing her seated next to a gueridon overloaded with gold boxes, Augsburg animals, Renaissance clocks and Paduan bronzes.”

Saint Laurent apparently declared himself obsessed with the image. “I have made you a blow up of the gueridon. I would like to create a similar ensemble.”

Divided into five categories, first under the hammer Monday is Impressionist and modern art. Tuesday will start with Old Master and 19th-century paintings, followed by silver and miniatures, then Art Deco of the 20th century for the evening. The final sale will include sculptures, archeology, furniture and Asian art. Christie’s will man 100 phone lines while bids can also be placed via the Internet.

Proceeds from the sale, meanwhile, will be donated. Saint Laurent bequeathed his half of the collection to the Pierre Bergé-Yves Saint Laurent Foundation, while Bergé will put his share toward a new foundation he’s created to fight AIDS.

For collectors of Saint Laurent’s better-known passion, an auction of another kind takes place next week, timed to coincide with the art sale.

Around 900 vintage Saint Laurent pieces, from dresses, suits and furs to jewelry, dating from 1962 to 2002, will go under the hammer at Drouot Richelieu auction house. Highlights include a swirl-printed dress from the fall-winter 1979 Homage to Picasso and Diaghilev collection, which is expected to fetch between 5,000 and 6,000 euros, or $6,300 and $7,600. The pieces will be displayed next Tuesday and Wednesday, with the sale itself on Thursday and Friday.