Griscom was known for her discerning taste, whether that be in relation to fashion, art or home decor.

Christie’s is gearing up for the “American Muse: The Collection of Nina Griscom” sale, which will encompass fine and decorative art from the stylish and entrepreneurial socialite’s home and jewelry.

Griscom, who died in January at age 65, was a former model, entrepreneur, writer and TV personality. She bridged the worlds of New York society, fashion, art, design, charity and media. The daughter of Elizabeth Rohatyn and Charles Renshaw, her Upper East Side upbringing included earning diplomas from Miss Porter’s School and Barnard College. The spirited platinum-haired Griscom once said of her modeling career under Eileen Ford, “I wasn’t discovered. I walked right in and demanded work.”

In the early Nineties, she worked in entertainment news at HBO and later had a five-year run as a presenter with Alan Richman of “Dining Around.” Griscom used her eye for interiors by running home decor stores in Southampton and Manhattan.

For Christie’s chairman of the Americas Marc Porter, the sale is absolutely bittersweet since Griscom was one of his closest friends. “The compensating side of that is you were able to present the person that you knew to the world, and not some third-hand fiction of what a person was like. It’s almost like being someone’s executor and making sure their wishes are fulfilled,” he said.

The art side of things, as well as furniture and decorative objects, will go under the gavel in an online sale Dec. 2 to 17. There will be 34 lots, with Old Master drawings, 20th-century sculptures and modern furnishings among the selection. Some of the jewelry that belonged to Griscom will be part of the live auction “Magnificent Jewels” sale on Dec. 8 and the “Jewels Online” auction that winds down on Dec. 1. A 15-carat diamond ring, which is expected to fetch between $120,000 and $180,000, will be among the 35 lots. An Art Deco diamond bracelet and a ruby and diamond broach are each estimated to reel in between $30,000 and $50,000.

This 15-carat diamond ring is expected to fetch upwards of $120,000 at auction.  Courtesy of Christie’s

Recalling how he met Griscom, Porter said, ”It was one of those magical things. We were in Beirut together at the opening of the national Lebanese Center for Contemporary Art for our friend Nabil Nahas. There was a group of us that went to Beirut and we spent the week together, doing thing organized by Nabil and his family.”

Several pieces by Nabil, such as “Untitled (Shells),” are featured in the upcoming sales, since the artist and Griscom were close friends. The sale is all in accordance with Griscom’s wishes.

Porter said of Griscom, “She was obviously so beautiful and stylish. I think the surprise was the curiosity and the intellect about all things, all people, all cultures and all kinds of lives. That made her an amazingly substantive and interesting person to be with. She was also just a great generous friend, as a friend.”

He continued, “One might expect a golden hauteur and instead there was a sort of a wicked sense of humor and kindness with people, with animals and of course other cultures generally.”

Highly regarded in fashion, a familiar face in the art world and a forerunner in food-oriented television, Griscom’s life crossed many sectors. Now that such cross-pollination is not possible due to the pandemic, Porter said, “We all saw pre-COVID-19 on the horizon, the world moving to a virtual, digital world. What we were planning to unroll in three or five years, we had to unroll in a month or two months. We’re still continuing to develop it.” 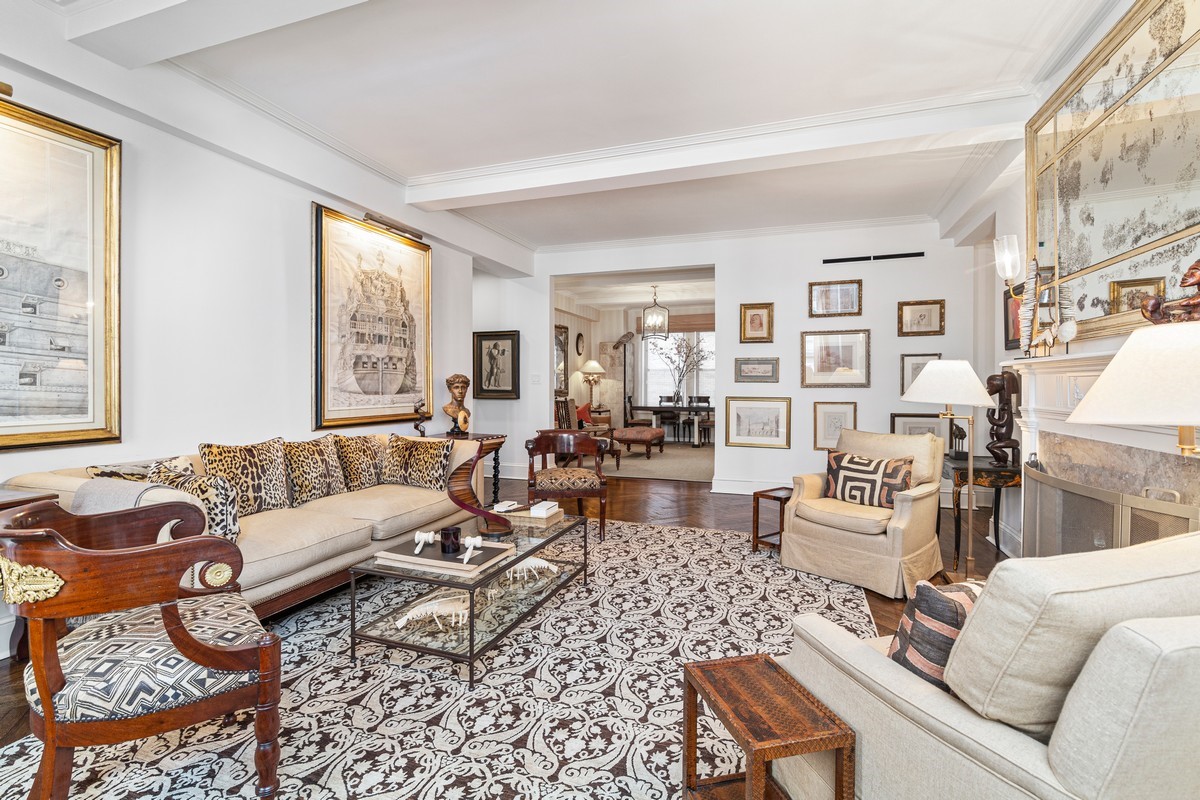 The interior of Nina GriscomÕs Manhattan apartment.  Courtesy of ChristieÕs

To that end, interesting content from many sources, particularly well-produced content, “is key to keeping the art world together,” Porter said. “I have a fervent personal belief that there should be much more cooperation between the various players in the art market, because we are not well organized as an industry. If the pandemic has brought home anything, it’s how many people’s livelihoods are based in the visual art world. That’s from bold-faced gallerists to all of the people who make everything happen — the art handlers, the hangers, the specialists. The arts are the second-biggest industry in New York, and people have just been decimated economically and spiritually. It’s very difficult.”

In recent months, fashion items, couture items and hard-to-find sneakers have become more prevalent in auction sales as a means to buoy business and generate interest from a wider client base. As for whether that will became more of a priority for Christie’s, Porter said, “One thing that has happened as we moved into a more virtual and digital realm is that the viewership of auctions has skyrocketed dramatically,” estimating that the last major sale of 20th-century art was viewed by 250,000 to 300,000 people. “In that, most people are not buying the major works of art for sale. But they are all potential clients at various price points. The merging of the art world and the fashion world has become so much more pronounced in the past few years that I do think that will continue to be an evolving element.”

With a presence in 46 countries and sales rooms in 10 cities, Christie’s generated auction sales of $5.8 billion last year. Making the point that Christie’s Hong Kong led the way with handbags as a category in luxury, Porter said, “That was the first big step. Of course, there are occasional couture sales, which there were in the Fifties as well. There are moments in time when fashion becomes collectibles and are sold by auction houses. Then maybe they are not for a few years, and they come back into fashion again.“

Last summer Christie’s and Stadium Goods joined forces for an online sale of rare footwear and memorabilia called “Original Air: A Sale of Michael Jordan Game-Worn and Player Exclusive Sneaker Rarities.” A portion of the proceeds from the sale benefited the NAACP Legal Defense Fund, which both Christie’s Americas and Stadium Goods had made corporate gifts to earlier in the year.

Offering fashion is certainly part of having a much larger and global client base, according to Porter. “And being part of Kering, Mr. [Francois] Pinault’s Kering group, which is otherwise primarily fashion. But we as part of a whole corporate group have similar directives in terms of expanding our client information and our client base,” he said.

”Not everybody buys Rothkos. They buy couture or sneakers,” he added.