A lot of the action happened on the inside of Nicole Kidman’s red carpet dresses, and Mick Jagger’s sparkly stage jackets.

Embroidered looks from the L'Wren Scott online sale at Christie's.

LONDON — One doesn’t have to try on L’Wren Scott’s red carpet gowns, stage costumes or even her famous, curvy headmistress dress to understand the late designer’s attention to detail, love of luxury — or her sense of humor.

This was a designer who served full, sit-down meals (on table linen) to the harried fashion press as her ready-to-wear shows unfurled, who’d sneak into the lineup of her show’s finale and walk along with the models, towering over them with her 6-foot, 3-inch frame — and barely containing her laughter.

And while Scott was quick to poke fun at herself, she took her clients — and her longtime partner Mick Jagger — very seriously. Like any good designer she was thinking miles ahead, and planning how she could make their life in the spotlight as effortless as possible. 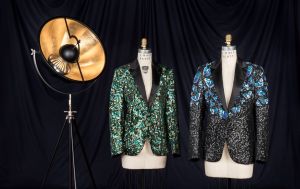 The curators of an upcoming auction have made every effort to highlight the attention and research that Scott put into her work, and show just how much was behind all of that Hollywood slink and sparkle.

Kerry Taylor, founder of the eponymous auction house that specializes in vintage fashion, fine antique costume and textiles, has been consulting on the sale, and described one of the top lots, a skinny, sparkly dress worn by Nicole Kidman in 2007, as “sneaky” — yet in the best possible way.

“It’s nude, almost the same color as Nicole’s skin, and very sneaky because it’s got a sort of invisible construction inside, making it feel like an embrace,” said Taylor of the dress the actress wore to the premiere of “Fur: An Imaginary Portrait of Diane Arbus” at the Rome Film Festival in 2006. 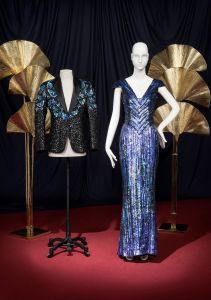 “The dress would just hug you, literally, and you didn’t have to worry about anything. Wearing an L’Wren dress, you would have this absolute confidence. You never have to think after putting on these clothes — you just go.”

Taylor added that Scott would never have a synthetic silk inside one of her dresses. “It would always have to be 100 percent pure silk satin, and she went to the French couture embroiderer Lesage. She had been a model for fashion houses in Paris — Mugler, Lagerfeld and Alaïa all loved her — and could see how haute couture worked. And her aspirations were to be absolutely the best.”

Scott took that same exacting approach to Jagger’s stage costumes, two of which are in the sale. “There were always extra seams in the jacket so that if Mick was dancing or moving his arms, there wasn’t going to be this awful rip at any second,” said Taylor. 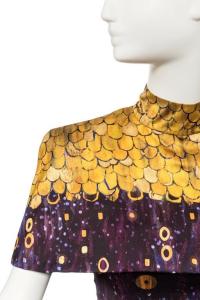 A closeup of one of the Gustav Klimt dresses, painted with gold leaf.  Image Courtesy of Christie's

Jagger challenged her with his on-stage demands. “When things are too tight or scratchy, forget about it,” Scott told WWD in a 2012 interview. She said she’d put extra seaming inside the underarm and across the back. “Architecture’s a big part of our design — how to make heavily constructed things that are comfortable,” she said.

It was Jagger who approached Christie’s about the sale, along with Scott’s family. Proceeds from the 55 lots will go toward the L’Wren Scott MA Fashion Scholarship at Central Saint Martins. Jagger set up the scholarship in 2015, the year after Scott committed suicide, and the aim is to support one student each year to reach his or her potential in the fashion industry.

Jagger has described the sale, which will take place from June 9 to July 1, as “a celebration of L’Wren’s remarkable work” and a chance for the public “to see and enjoy her creations. L’Wren was a talented and passionate designer with a keen eye for detail.  Everyone who wore her dresses was at the center of her designs,” he said. 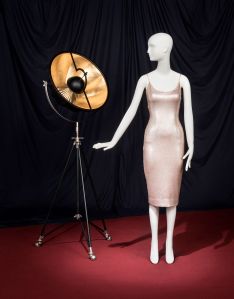 Among the top lots are the two bespoke stage jackets that Scott made for Jagger, with an estimate of 20,000 to 30,000 pounds each. Scott referred to one of them as the “glamouflage” jacket — a word she made up. Made from black satin, it’s densely beaded, sequined and embroidered with oak-leaf motifs in green, black and khaki. Jagger wore it during the Rolling Stones’ headline performance at the 2013 Glastonbury festival in England.

The other is known as the Butterfly jacket, which Jagger wore at the Stones’ Hyde Park, London, concert in 2013 as he performed “Miss You.” Large screens surrounding the stage showed blue butterflies, identical to those on his jacket, fluttering skyward as a tribute to the late Brian Jones.

Dressing men and women for the public stage came naturally to Scott, a Utah native who began her fashion career as a model in Paris, and later became a successful Hollywood stylist. She would subsequently move into bespoke clothing and rtw, and was known for her lean, elegant silhouettes, bold colors and clientele that included Kidman, Sarah Jessica Parker and Penélope Cruz.

Other highlights in the Christie’s show include one of Scott’s Gustav Klimt-inspired gowns, which Caitlin Yates, head of sale, said is a stunner.

“Coming from an auction house, where we spend a lot of time looking at paintings, this was the most inspiring to me. The fabric has been hand-painted with gold leaf,” which is usually reserved for paintings and furniture, said Yates.

The sale also features pieces that Scott wore herself. Unlike other designers, Scott had no qualms about wearing versions of her celebrity creations and the sale features two almost identical slinky green dresses, one of which was designed for Kidman.

“If L’Wren liked it, she had one, too. And it is quite funny to see them wearing the same look,” said Taylor. “But L’Wren and Nicole were friends. They had very similar taste, and quite similar body shapes, and they were both tall and lean.”

While Scott may have spent much of her time with A-listers, she was still warm, grounded and funny. To that end, Christie’s wants to appeal to as broad an audience as possible, and has priced the pieces to reflect that. 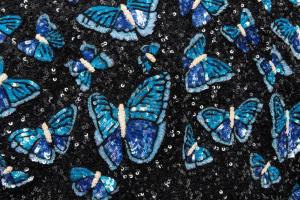 A closeup of the Butterfly embroidery on the jacket that Mick Jagger wore for a Rolling Stones concert in Hyde Park, London.

Kidman’s nude mesh number carries an estimate of 700 to 1,000 pounds, while a blue sequined evening gown that Daphne Guinness wore in 2008 to the Met Costume Institute Gala is priced between 1,000 and 1,500 pounds. Some of the cocktail dresses range between 400 and 600 pounds.

Yates said the house is expecting bidders from across the U.S., the U.K. and China, as well as Rolling Stones and Jagger fans, “but we also want to be inclusive.” As slinky as they may be, Yates said the dresses should appeal to a wide audience — not only those with Hollywood figures. “The dresses are wearable,” she said, “and quite forgiving.”

In the next weeks, Christie’s will be looking to generate as much interest as it can, staging a highlights exhibition that runs from June 11 to 16 in London. It has also scheduled the online auction at the same time as a handbag sale, so that clients can shop from both and create a look imbued with history.