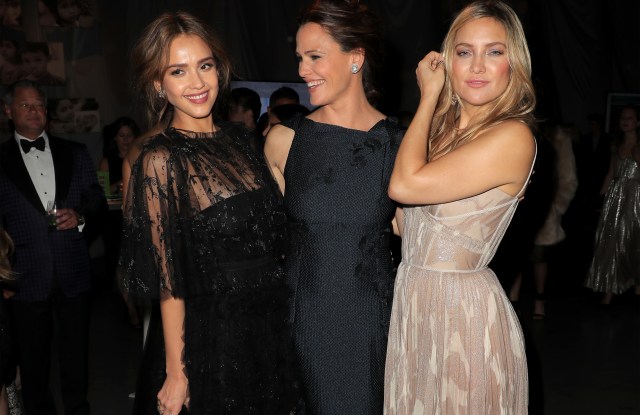 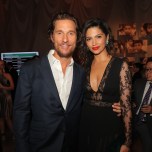 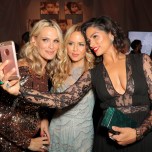 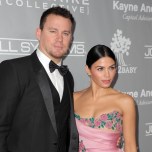 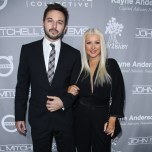 Jessica Alba, Christina Aguilera, Jennifer Garner, Kate Hudson and Camila Alves were among the Hollywood moms who came out full force to support Baby2Baby at the nonprofit’s fifth annual gala on Saturday night. Held at 3Labs in Culver City, Calif., the event raised nearly $3 million for the organization, which provides clothing, diapers and basic necessities to children in low-income families.

Garner received Baby2Baby’s Giving Tree Award for her philanthropic work. The mother of three said she feels compelled to support organizations like Baby2Baby and Save the Children because of her upbringing. “My mom grew up dirt poor with 10 siblings, no running water, no electricity,” Garner told the crowd after her “Dallas Buyers Club” costar Matthew McConaughey presented her with the award. “Awareness and gratitude are powerful motivators, and have driven me to think about big things, like how did my mom get out [of poverty]? And why can’t all of these kids?”

Earlier on the carpet, plenty of well-dressed attendees admitted that after the election they now felt even more compelled to do their part. “Given the change in our government, we have to step up and make sure that even if government initiatives are cancelled that the private sector takes care of the people who need taking care of,” said Julie Bowen.

Kelly Rowland agreed. “I think that with what just happened this past week, it’s a lot of anxiety,” she said. “My son is in this world. I have nieces and I have nephews and I refuse to have them live in a s–tty country, not in a country that’s given me so much. America is not just [Donald Trump’s] America, it’s my America, too, and I plan on spreading love within it.”

Rowland first connected with the organization’s copresidents Kelly Sawyer Patricof and Norah Weinstein while at the gym. “I met Kelly on the treadmill,” explained Rowland. “I was six months pregnant with my son and she said, ‘You’re going to get a whole bunch of stuff and some of the stuff you won’t even use. Can we have it? We need it for our babies.’”

“This changes children’s lives,” added board member Alba, who noted they’ve distributed more than 27 million items to homeless shelters, children’s hospitals and domestic violence shelters. “There are still so many kids in our backyard that still are going without these everyday essentials that a lot of us take for granted.”

Others in attendance included Channing Tatum and wife Jenna Dewan Tatum, Rachel Zoe, Michelle Monaghan, the evening’s emcees Kristen Bell and husband Dax Shepard, Jordana Brewster, Selma Blair and Rebecca Gayheart. Boyz II Men sang a three-song set featuring hits “End of the Road” and “I’ll Make Love to You,” during which they handed out red roses to women in the audience. Said Sawyer Patricof, “They called me and they were like, ‘Do you think that’s OK? Or do you think that’s not the right vibe?’ I said, ‘Oh, it’s definitely the right vibe.’”