Cindy Crawford on Charity and Her New Book

No matter how at ease she is on a fashion shoot, Cindy Crawford's latest role in "Hospital in the Sky" is intentionally less glamorous. 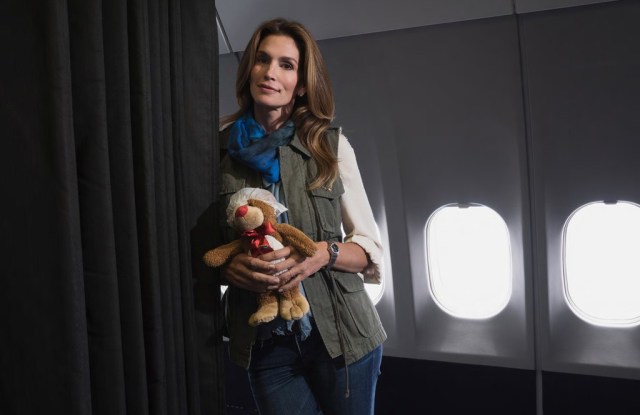 No matter how at ease she is on a fashion shoot, Cindy Crawford’s latest role in “Hospital in the Sky” is intentionally less glamorous with the hope it will make viewers take action.

Produced by Omega, a brand she has worked with for 20 years, and Orbis International, a nonprofit dedicated to saving eyesight, the documentary film will debut Thursday night at the New York Historical Society. Crawford and her daughter, Kaia Gerber, appear in the film pitching in at Orbis’ Flying Eye Hospital during its program in Trujillo, Peru. During Thursday’s event, she will discuss their emissary trip and the visually impaired children and volunteer physicians they got to know. Orbis president Jenny Hourihan and Omega president Stephen Urquhart will also be on hand to discuss what is the follow-up documentary to Daniel Craig’s mission for Orbis. There will also be news of two initiatives to support Orbis. Omega will donate a portion of sales from each Constellation Star timepiece to benefit Orbis, and it will launch a teddy bear campaign so that young patients will each receive one to comfort them onboard the Orbis hospital.

In Peru, the mother-daughter team kept the children company before their medical treatments, and they learned how visiting American physicians “don’t just fly in like heroes, wave a wand and leave but they actually teach the local doctors.” Crawford said.

Although the pair managed a whirlwind tour of Machu Picchu (which had “totally” been on Crawford’s bucket list), Crawford said seeing her 13-year-old helping the children on the Orbis plane was “really gratifying.” “Both of my kids get to see the fashionable glamorous side of what I do, but they also see me get up at five in the morning schlepping myself around the world,” she said. (Even though her daughter is “kind of chomping at the bit to model,” Crawford is trying to hold her back for the time being.)

Similar candor will be shared by the supermodel when Rizzoli publishes her book featuring 50 iconic images with 50 essays about the various life lessons she has learned since her childhood days in Illinois. The tome — which Kate Betts has helped write — is meant to be a precursor to her 50th birthday in February 2016. “We’re finishing the layouts so now I’m going to all my favorite photographers saying, ‘OK, I’ve never asked for a favor before, but can I please use your photo?’”