Wrapping up the scene after the Academy Awards, highlighted by Vanity Fair's viewing party and post-Oscar bash at Morton's. 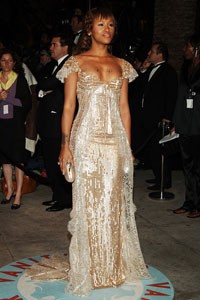 For Hollywood’s social climbers, the most coveted ticket of the year isn’t the Academy Awards but Vanity Fair’s viewing party and post-Oscar bash at Morton’s, a mesclun of sorts with the occasional hot tomato thrown in (this year it was past VF cover girl Teri Hatcher, who posed for pictures with an uncomfortable-looking Nicole Kidman). “The room is spinning,” an awed Brittany Murphy said.

While the guest list counted names from Bloomingdale (Betsy) to Wyatt (Lynn), with a Guinness, a Getty and a Boardman in between, the party is really all about the stars — especially those like Rachel Weisz holding the coveted statuettes. Hilary Swank, Kate Bosworth, Keanu Reeves, Sandra Bullock, Tom Ford, Sienna Miller, Naomi Watts and Uma Thurman stopped by to schmooze the latest golden gals and guys, as did Madonna, who chatted up a storm with Will Ferrell and Steve Carell inside the ultra luxe, caramel-hued tent. Zac Posen worked the crowd while nominee Felicity Huffman sang his praises, saying she was wearing a gown by “THE Zac Posen” and describing it as “true alchemy, when silver turns to gold.” But not when it came to collecting an Oscar, unfortunately.

A bewildered Jamie Tisch wondered why an enthusiastic partygoer had asked her to snap his picture with Jennifer Lopez, before realizing that it was Mario Testino. “Oh! I thought he was, you know, like a stalker,” she whispered. But the evening runs like a well-oiled machine, so the only “incidents” are those of a social nature, such as exes Watts and Heath Ledger floating by one another.

Of course, the first stop for many immediately after the awards at the Kodak Theater is the Governors Ball upstairs in the Hollywood and Highland ballroom. An ecstatic Philip Seymour Hoffman, with Catherine Keener in tow, posed for pictures, while Reese Witherspoon swooped in with her Oscar and Ryan Phillippe. Presenter Jennifer Garner skipped it in favor of going home to baby Violet.

The pre-VF stop for those celebs not involved with the awards show was Elton John‘s 14th annual dinner for his AIDS Foundation, where Mary J. Blige, Prince, Ozzy Osbourne, Sharon Stone and Macy Gray mixed with youngsters Samaire Armstrong, Kevin Zegers, Lindsay Lohan and Nicole Richie for the night — or make that afternoon, since cocktails started promptly at 4 p.m.

Eve walked in looking Oscar-ready in her plunging, gold-sequinned gown. “I thought, when else could I wear this dress?” she said.

Pamela Anderson‘s clique, which not surprisingly included David LaChappelle and Amanda Lepore, misbehaved from one end of the party to the other — while Anderson’s famous assets ran amok in her very-unbuttoned shirtdress. For her part, Lepore, clad in a barely there Dior lingerie-style dress, threatened to strip fully for her dinner partners if “Transamerica” won any big Oscars. Much to their relief — and everyone else’s — her garments stayed in place.

Olympian Sasha Cohen was surprised to find out that her silver medal carried as much pull as an Oscar. “It was so surreal to meet Tom Cruise and have him stop and not just shake my hand and keep moving,” she said. “And I met Josh Duhamel and I was, like, ‘Oh! He’s so cute.'”

By the end of the night even the most stoic partygoers were tired. “My feet hurt,” said Kathy Hilton, as she waited for her car. The intrepid matriarch, who had come with Paris, Nicky and husband Rick, stepped into the road to direct traffic. “Come on, pull up!” she waved to the valets, joking, “I should do this. I do it better than them, don’t you think?”