Claudia Cardinale on Dancing With Alain Delon, Meeting the Pope and Being Courted by Steve McQueen

The 81-year-old "The Leopard" star is putting her collection of Italian couture dresses up for auction at Sotheby’s Paris.

PARIS — The day hadn’t started very well: Someone had tweeted that legendary Italian actress Claudia Cardinale, known for her roles in Luchino Visconti’s “The Leopard” and Sergio Leone’s “Once Upon a Time in the West,” had died.

“But I’m very much alive!” said Cardinale, roaring with laughter.

The anecdote didn’t put a damper on her jovial mood. The 81-year-old actress was in Paris to prepare for the auction of over 130 couture and ready-to-wear dresses from her personal wardrobe, which are to be exhibited at Sotheby’s Paris from July 2 to 4 and will be for sale until July 9.

“It’s very moving to see them here all together,” said Cardinale. “They had been stuck in storage in my parents’ home in Rome for years and years. I didn’t remember them being so beautiful.”

The collection spans the first 20 years of the actress’ career, starting with demure, light-colored dresses from the end of the Fifties to more flamboyant garments as she hit stardom in the Seventies, after appearing in Federico Fellini’s “8 1/2” and starring opposite David Niven in “The Pink Panther.”

“It represents a form of emancipation, both on a personal level and a more global scale” said Cardinale’s daughter Claudia Squitieri, an art historian who helped curator Julia Guillon prepare for the auction.

“The silhouettes from the Fifties are quite plain, with a lot of girly and demure dresses,” she continued. “You can tell they belonged to someone who was still a bit fragile with not a lot of freedom of choice. And then you feel there is a real moment at the end of the Sixties, when my mother became a lot more emancipated and allowed herself to experiment with more color and styles, such as flared pants. The collection represents a transition from one era to another.” 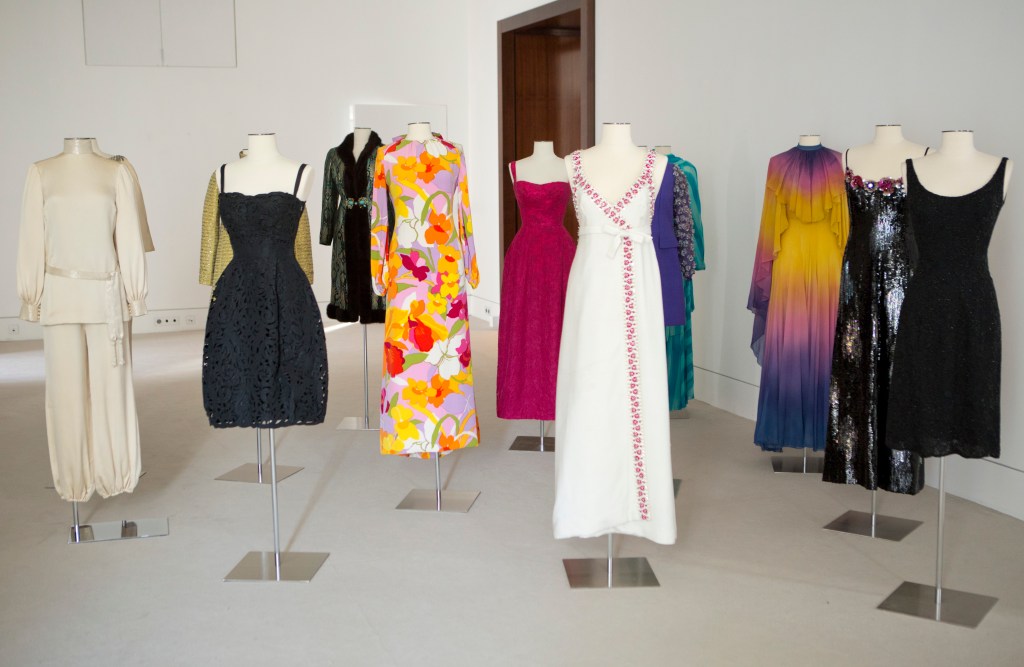 Claudia Cardinale is putting 130 couture and ready-to-wear dresses up for auction at Sotheby’s Paris.  Franck Mura

One of these silhouettes is a cream silk blouse and harem pants set by Italian designer Roberto Capucci, estimated between 2,000 and 3,000 euros or $2,275 to $3,400, that Cardinale wore at a party in Rome in 1969 (“It’s a lot easier to dance in trousers,” quipped the actress.)

“What is interesting in Claudia’s collection is that it is mainly made up of Italian designers, such as Balestra, Barocco and Lancetti,” said the curator. “Historically, it represents a moment when Italian couturiers liberated themselves from Parisian fashion, and shows Claudia’s support for her country.”

Cardinale was busy focusing on a completely different matter.

“Can I see the back of that dress?” she asked, gesturing to a sequined black mini dress by Mingolini Gugenheim that she wore in Francesco Maselli’s 1960 movie “Silver Spoon Set.”

The curator pivoted the mannequin: The back was extremely low-cut.

“So I obviously didn’t wear a bra,” the actress cried out with glee.

“I didn’t like to show my cleavage. I refused all the low-cut dresses,” said Cardinale. “So this was obviously my way around it.”

That didn’t stop her from being daring with her style choices.

“I was one of the first to wear Mary Quant’s miniskirts,” said Cardinale, who throughout her career chose all her outfits herself and often wore items she picked up during trips abroad. “I even wore one to meet the Pope in the Sixties. The photographers went crazy, but the Pope simply said: ‘My child, I might be the Pope, but you are the Cardinale.'” Cue more laughter. 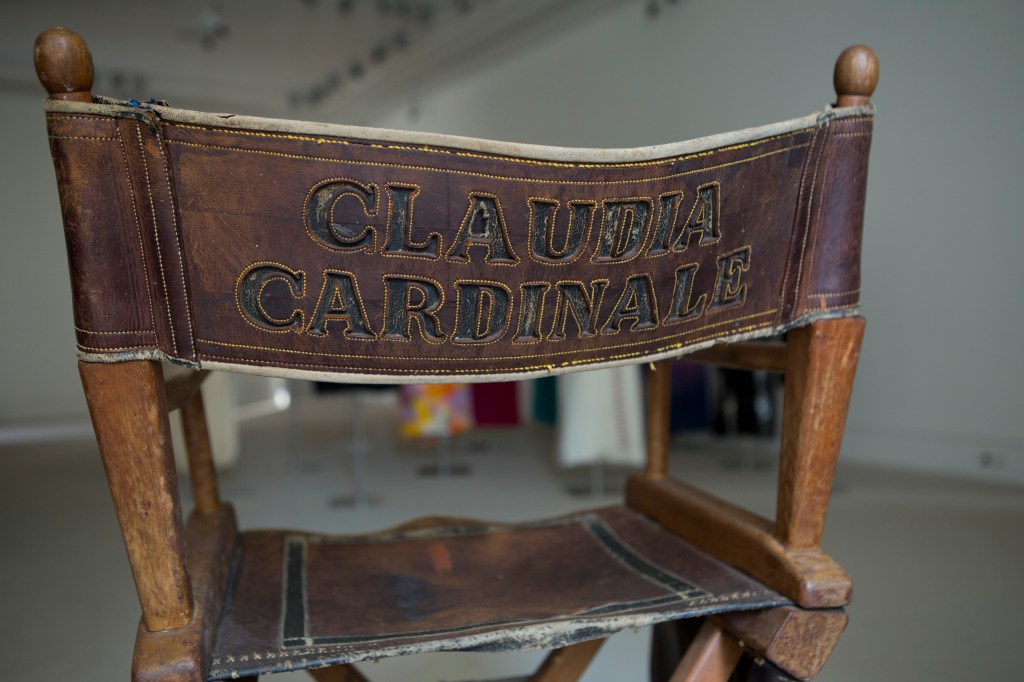 Claudia Cardinale’s chair from the set of “Once Upon a Time in the West.”  Franck Mura

The actress has fond memories of filming cult Italian movie “The Leopard” in which she starred opposite French heartthrob Alain Delon and Hollywood star Burt Lancaster.

“What I remember the most is rehearsing the waltz during hours on end,” she said of the famous ball scene in the movie, in which she steals the show as Angelica, new bride of Tancredi (Delon), who dazzles the whole room as she dances with prince Fabrizio Salina (Lancaster).

Cardinale is still close to Delon, with whom she forms a striking couple in Visconti’s 1963 movie, her sultry dark looks contrasting with the French actor’s blue-eyed fair complexion.

“He called me in May to ask me to accompany him to Cannes, where he was receiving a prize,” she said. “‘We shot four films together and I want you by my side,’ he told me. Unfortunately I was away in Switzerland filming ‘Bulle,’ a TV movie by Anne Deluz. I was so sad.”

Talking of heartthrobs, there is one mystery that the actress — who, still busy at work, has both the TV movie and a Tunisian flick coming out soon — has never quite managed to understand.

“Steve McQueen used to come over to see me in Rome all the time,” she said, leaning over conspiratorially. “And the funny thing was, he always used to bring me a pair of stockings. Black lace, deep green… I had so many that I didn’t even open them all. I wonder why he did that.”

Her daughter sighed. “Because he was in love with you, Mom.”

Cardinale giggled. “Maybe he was.”