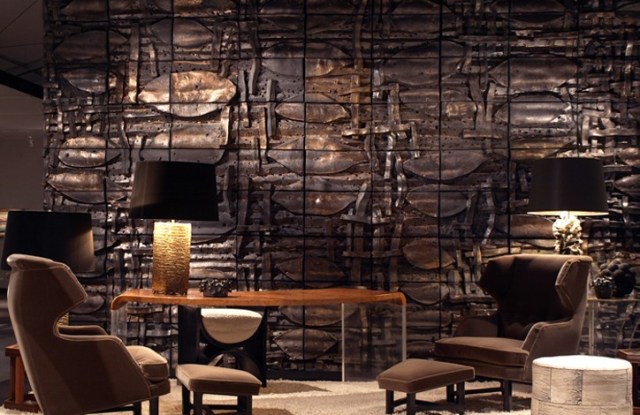 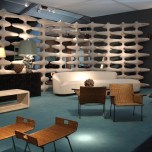 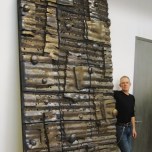 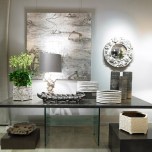 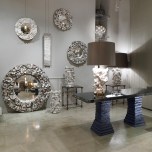 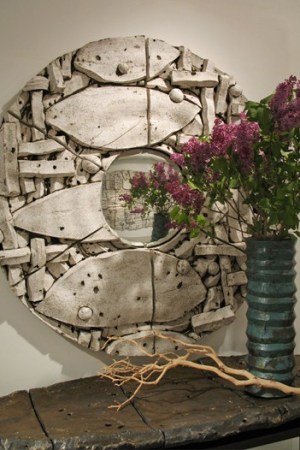 An interior shot of the solo show downtown. 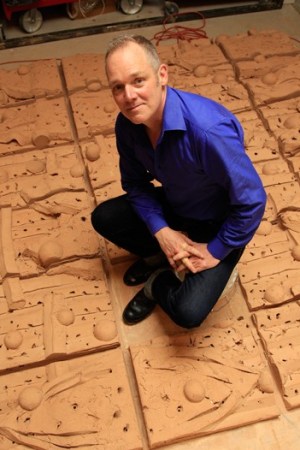 Brooklyn ceramicist Peter Lane likes nothing better than burning the kiln every day, which is a good thing since keeping up with commissions from all over the globe isn’t easy.

In the next few weeks alone, he will jet off to Los Angeles, Morocco, Paris, London and Megève, France, to install new pieces or exhibitions. In New York through June 25, “Peter Lane, Large Scale Works and Sculptures” is up at the by-appointment Cocobolo Gallery, and his creations will also be featured in a group show there later this summer. In June, Lane’s largest wall relief to date, a 22-by-9-foot structure, will be the anchor piece in a new Melrose Avenue gallery in Los Angeles. His Paris representative, the Chahan Gallery, is gearing up for a few fall shows that will feature his work.

High-flying as that sounds, Lane’s work week is more often than not made up of 10-hour days, every single day. He is the first to admit his job title is not the sexiest and is all too familiar with the polite smiles strangers offer upon learning his profession.

“How do you bridge the gap to say you make pottery for a living? That’s not something you do easily with a straight face,” he says. “That’s the main challenge — to take what you do seriously.”

Raised in Oak Park, Ill., home to Frank Lloyd Wright and Ernest Hemingway, Lane was encouraged by his psychiatrist father and nurse mother to enjoy the arts. (His sister is an opera singer.) Standing amid the many pieces of pottery he has crafted in an airy design studio, Lane said he was never one to have a clear-cut view of how his career should play out. A trip to a Miami flea market led him to the potter’s life. “Outraged” by the price of an $18 turquoise-colored Royal Haeger bottle he bought, he challenged himself to try his hand at ceramics.

“It was the classic approach to finding your way into a trade,” he says. “I thought, ‘How hard can it be?’”

After taking a class at Greenwich House Pottery in 1994, he was hooked.

“Once I found ceramics, it was all I cared about,” Lane says. “It never doesn’t thrill me. I feel very fortunate.”

In 2001, he started honing his craft in what used to be a “derelict” Carroll Gardens building that housed an apple processing plant. There is no trace of that today in the 5,000-square-foot space shared by a variety of artists. Lane, who uses another design studio in the Williamsburg neighborhood, says, “I didn’t want to come to Brooklyn. I’m a snob like everyone else. I wanted to stay in Manhattan.”

Bill Georges, Peter Marino, William Sofield and Rick Livingston are some of the regulars who routinely ring him up to create one-of-a-kind wall reliefs, labor-intensive lamps and birch bark-type tables. Standing beside a massive bas relief with sculptural wall panels that will grace a Miami art collector’s poolside cabana — a four-month project — Lane says, “So much today is mass produced. There is not that much that is unique. Even if you get a designer or limited edition chair, there are however many made. There is a demand and appreciation for the work I do because it is handmade and not produced in a factory. And I try not to repeat myself.”

To decompress, Lane makes bronze-colored vertebraelike necklaces and other jewelry to give to friends and friends-of-friends, like Zaha Hadid and Rick Owens.

“When my hobby became my career, I needed another hobby,” he says. “Nobody has room for another lamp but they always have room for more jewelry, especially living in New York.”

All in all, Lane’s diversions are few. Like one of his favorite artists, the 16th-century potter and craftsman Bernard Palissy, he prefers to be immersed in work.

“I would rather be doing this than anything else,” he adds. “I didn’t start until I was 30. Most people have their careers up and running by then. I had my retirement when I was younger.”