The French actress discusses her latest film "The Ones Below" and what it's like to front for Chloé. 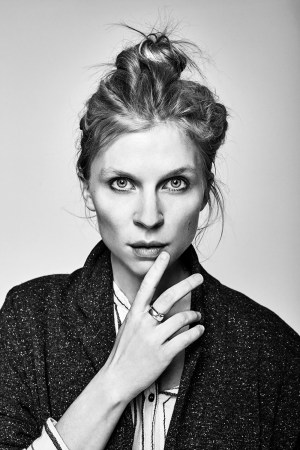 Showing up to WWD’s offices in flat sandals, a slouchy tweed jacket and striped button-down, her hair thrown into a topknot and sans makeup, Clémence Poésy is embodiment of chic French insouciance. It would be easy to hate her for exuding effortless cool so expertly, but it’s her lack of pretension that makes her likable. When she opens her mouth to speak about her latest film to hit American theaters this Friday, the British art house project “The Ones Below,” her accent is a mix of French and British, evidence of her lives in both cities.

“I’m French, but I’m not sure where I base myself really. I guess both Paris and London,” she says. She’s in Los Angeles for the week to see old friends and do a bit of promotion for the film, which premiered at the Toronto Film Festival.

“There’s not one drop of blood,” she says of the psychological thriller, about two pregnant couples living on different floors in the same building. “I thought it was a really interesting take on a moment in your life of having a new life to be responsible for and I found the way David [Farr, screenwriter and director] wrote the script incredibly smart and playful. The two women characters become close friends even if they are incredibly different, and then something goes wrong. The house they live in becomes almost a character,” she alludes.

Poésy, 33, actually likes to keep people guessing. It’s hard to pinpoint her acting style, since she’s appeared in French, English, Italian and American productions as varied as “Harry Potter and the Deathly Hallows: Parts 1 and 2,” “In Bruges” and “Gossip Girl.”

“The way I spent the first 10 years [of her 17-year-career] working, I was quite curious and I just felt like I had to try a few things to figure out what felt best,” she says.
Despite having studied the arts at university and attending drama school in France, she still likes to say she’s not sure acting is her calling. “I don’t think I grew up thinking this is what I want to do…although I just might not have admitted it or felt a bit silly saying it because everyone was saying that, so I was saying something else…which I might be continuing in interviews…at 33,” she says.

Poésy is also known in fashion circles as a model and the face of two Chloé fragrances, a relationship that began almost 10 years ago. “I was just really touched by how faithful they were. It’s quite rad to get the chance to work at different stages of your life with the same people and Clare [Waight Keller] is incredibly talented and the coolest. I just feel really privileged. I had pictures of Chloé campaigns on my teenage walls because I thought it was poetic and romantic. It never feels super aggressive or overly sexy, it just feels like girls you know or would like to be friends with,” she says.

Poésy does seem like the sort of gal who would be a fun friend, in part because she could tell tales of her upcoming projects, which include “Demain Tout Commence” with “The Untouchables” star Omar Sy, to be released in France in December; “Final Portrait,” written and directed Stanley Tucci and starring Geoffrey Rush as artist Alberto Giacometti (she plays his muse and mistress); and the Italian films “7 Minutes” (in which she acts in Italian) and “Tito Il Piccolo,” which she’s filming now in Rome and Spain (most of her dialog is in English, as she plays an Englishwoman who tries to communicate with the Italians using “very bad Spanish”).

Still, she’s not content to just star in films, she’s just written and directed her first short “La Grande Adventure” due out in June. “I’ll just be stopping in France to edit it, before going back to work in Italy,” she says. “But I wouldn’t say I’m that busy.”