Cleo Wade Is Back to Have the Big Conversations

The poet and self-help writer on her new journal book, voter suppression and creating merch for Kamala Harris.

It’s the day after the presidential debate and, like most of America, Cleo Wade is struggling to make sense of what we all just watched.

The 32-year-old poet and self-help author, on a Zoom call from her bright green home office in L.A., has, like many, been using her medium to encourage voting this upcoming election season, with collaborations with Kamala Harris and La Ligne and her own line of merch.

“For me, my biggest focus this election season is raising funds to fight against voter suppression because voter suppression is just so intense in this country,” Wade says. “And it’s going to be a real challenge during this election, specifically, because I believe that the current administration is betting on taking a playbook from Georgia. I think that Donald Trump knows that if people can get to the polls, he doesn’t win. And so I think they’re going to try to have fewer voting sites.”

Her products with La Ligne entirely benefit voter suppression causes, and came in high demand: the mask sold out in five minutes, with the T-shirt following suit in the first hour. She also produced her own set of sweatshirts, which read “vote the change you want to see in the world” and “real leaders lead with love,” and, the one she’s most proud of, made the first merch for Kamala Harris after she was named the vice presidential pick: a shirt with a childhood photo of Harris printed on the front, with the words “the first but not the last.”

“I’ve been friends with Kamala for a long time and her sister Maya, and I only recently got to know her niece Meena. Meena was really sweet and gave me access to a lot of their family photos for me to go through their family archive,” Wade says.

She sees the demand for such items as little bits of comfort and inspiration people can latch onto throughout their days, during such turbulent times.

“I think especially after nights like the debate, people just want things where they look at it and it brings them joy, or brings them hope or it grounds them. Because really during this period, there’s so much going on that all of a sudden, you just feel like you’re floating,” Wade says. “You’re just like, ‘Oh, my God, hold on. I feel so scrambled. What’s going on? Who am I? What do I do about this?’ And I think having one simple message around you and your life, whether that’s a poster that says, ‘We are the builders who are building a world that’s never been built before,’ or it’s a sweatshirt that says, ‘Real leaders lead with love,’ it’s like, ‘oh, OK. I can ground myself in these words.’”

Wade is toasting the release of her latest written project, a journal version of her “Heart Talk” book called “Heart Talk the Journal: 52 Weeks of Self-Love, Self-Care and Self-Discovery,” out now. It drops at a time when many find themselves looking for forms of love, care and discovery, and Wade, who has been called the “Millennial Oprah,” is up to the task. 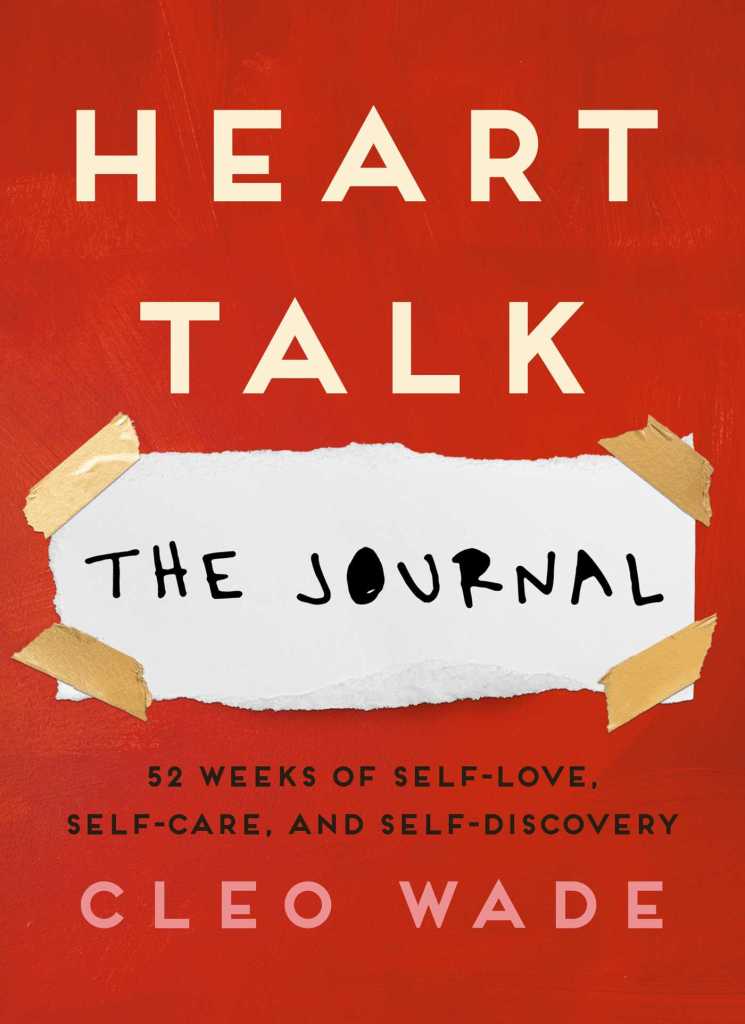 The idea to turn the concept of her “Heart Talk” book into a journal format was planted while still in the editing process for the original. She was on the very last draft, and found herself writing all sorts of notes onto the hard copy. When she went out on her book tour, she was shocked to see how many readers had done the same with their copies.

“Everyone had basically created their own book inside of ‘Heart Talk,’” she says. “I actually didn’t have plans to write another book, but when I saw that, I was like, ‘honestly, people clearly want more space to dive into these ideas and create their own tools and have space for reflection.’”

She moved to L.A. upon finishing her book tour, where she gave birth to her first child, and after a short breather, got to work quickly on creating the journal: something digestible, approachable and inspiring.

“Honestly, this book would have never been written if it weren’t for the people who, to me, already wrote this book in their copies of ‘Heart Talk,’” she says.

Wade was at work on the journal as the coronavirus pandemic unfolded, but the approach to the book didn’t alter much from what she had intended originally. When the original “Heart Talk” came out, she hadn’t written it as a response to the 2016 election, but her words for many took on an activism bent.

“When I was finished with ‘Heart Talk,’ I was like, ‘everyone’s going to think that I’m going to write something that has to do more with relating to the world than relating to yourself,’ but who are we, when we step into the world? If hurt people hurt people, don’t healed people heal people, too?” she asks. “And so I remember thinking, ‘we need to save ourselves in order to save somebody else or save our communities,’ so that when we go out into the world, it’s like, listen, if every time you’re in the world, even if you’re the most benevolent person on the planet, or you want the best, if you’re so angry or anxious, you can’t listen to others, how far can you get? And so for the journal, I didn’t think so much about this time, except in thinking that I did hope to get it out during this time. There’s so much that we’re feeling so much more right now, because the world is not moving so quickly we can’t. And so I did really want to make sure it could get into the world as soon as possible. But as far as the content goes, the content really was, for me, all of the tools, questions or ideas I’ve ever used, when it comes to kind of being able to clearly or swiftly make changes in my life to benefit the person I want to be.”