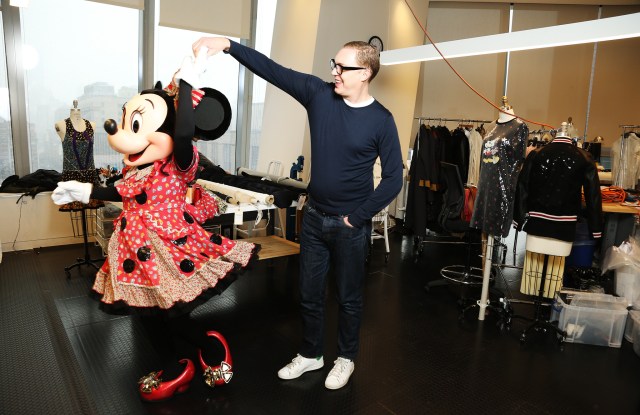 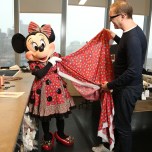 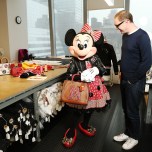 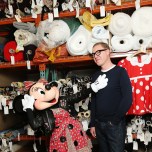 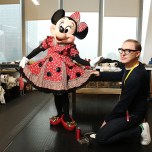 The perennially youthful and chipper character will celebrate her milestone birthday by joining long-time boyfriend Mickey with a star on the Hollywood Walk of Fame. In a ceremony today in Los Angeles, pop superstar Katy Perry and Walt Disney Co. chief Robert Iger — not to mention Mickey, too, of course — will be on hand to help Minnie mark the occasion.

The unveiling coincides with National Polka Dot Day, when Minnie and others will rock the dot. And few rock it better than Minnie.

For the official presentation outside the El Capitan Theatre, Minnie will naturally sport her trademark red-and-white polka dot dress. But she is a movie icon, after all, so like any of them she will immediately change into a custom outfit designed by Coach’s creative director Stuart Vevers.

And that will be a little more edgy than classic. Minnie will wear a one-of-a-kind prairie dress, complete with Vevers’ take on the polka dot — black sequined versions — under a cropped motorcycle jacket to a celebratory luncheon following the official unveiling.

Mickey also is adding a touch of streetwear and will wear a Coach moto jacket to the lunch while Perry will sport a sequined shirtdress with an illustration of Minnie and Mickey. That dress is part of a special capsule collection that Vevers designed in honor of Minnie that will be offered for sale at Coach stores and other select retailers in New York, Japan and Taiwan starting today.

However, Minnie’s prairie dress, with its pleated accents, lace trim and crystal embellishments, along with her leather jacket with a large “M” spelled out in studs on the back and a variety of appliqués on the sleeves and front, will be reserved only for her. Vevers also put his own mark on Minnie’s classic red shoes, infusing the color with sparkles and adding some Coach crystals.

Last week, Minnie visited Coach’s Hudson Yards headquarters in New York for a final fitting and got a chance to meet Vevers in person.

Although Minnie isn’t much of a talker — she declined comment on how she liked the dress because, well, she doesn’t actually speak — she was quite animated at the fitting, twirling around the showroom; flirtatiously batting her long lashes at Vevers (watch out Mickey) and rubbing his cheek with her white-gloved hand, and even trying out her “runway walk” for the Coach design team in attendance.

Vevers said the chance to meet Minnie in person was a real treat.

“I’d never met her before, but we have some history,” he said. In 2016, he created a Disney x Coach 1941 collection featuring Mickey Mouse that was a commercial success, selling out at retail.

“I’m a big lover of Disney,” Vevers said. “When we did the collection with Mickey, it was so much fun.”

The designer even took his final bow at the spring 2017 men’s show in London wearing a Mickey Mouse T-shirt from his personal archives. And in his most recent pre-collection, Vevers offered his unique take on the darker side of Disney, juxtaposing the infamous poison apple from Snow White with Americana accents and offering up “Sleepy” and “Bashful” embroidered leather bags.

“I wanted to play with something surprising and new,” he said, “and create some tension.”

Prices will range from $450 for the Dinky bag to $895 for the Rogue. Small leather goods will sell for $75 for an embellished coin case to $250 for a cross-body clutch. For the apparel, the hooded sweatshirt with patches will sell for $350, the sequined dress for $995 and the embellished moto jacket for $1,450.

For the line, Vevers “played with nostalgic, original graphics” and even explored the skate and surf side of Minnie with some vintage-inspired patches on purses that read: Roller Derby and Skate Board. “It shows the cool, spirited idea of Minnie,” he said.

The piece de resistance, however, may be the Kisslock bag that Vevers updated especially for the capsule with leather mouse ears and some “playful dot” accents. It will sell for $450.

But how exactly did Vevers feel about designing for a mouse rather than a woman? “I worked closely with Disney to understand Minnie’s proportions and which silhouettes would work best,” he said. “And we chose colors that were very Minnie and also represented quintessential Coach elements.”

Case in point, Vevers also whipped up a special Rogue bag “in special Minnie Mouse proportions” for her to carry on her special day.

“Disney is popular everywhere,” he said. “Wherever you go, everyone knows who Mickey Mouse is.”

So could a Donald Duck or Goofy collaboration be next?

Vevers smiled, saying, “Every time I think I’m done with my big Disney references, something else pops into my head. It’s very personal for me and I enjoy working with Disney, so who knows.”

Mickey and Minnie Mouse made their debut in 1928 in Disney’s “Steamboat Willie” cartoon and have since become one of the world’s most loved and recognized characters. Mickey received his star on the Walk of Fame in 1978 in honor of the cartoon’s 50th anniversary. Snow White, Donald Duck, Tinker Bell and other Disney characters also have stars on the street. Minnie will be the street’s 2,627th honoree.

“Minnie Mouse is a woman of the ages and her iconic status makes her a great addition to our Walk of Fame,” said Ana Martinez, producer of the Walk of Fame ceremonies. “Generations of fans of all ages have been looking forward to her seeing her bright new star.”

The ceremony will take place at 11:30 a.m. Pacific time and will be live-streamed on the Walk of Fame web site. And Minnie may even do her runway walk for the occasion.