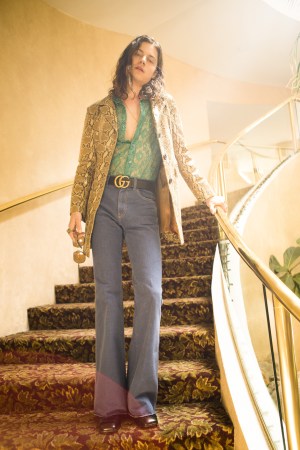 A one-time magician known as “Garrett the Great,” Børns, whose full name is Garrett Borns, has undergone his own transformation from professional sleight-of-hand to indie pop musician, complete with a celebrity fan club, fashion friends and an upcoming headline tour around the U.S. and Europe in support of his debut album, “Dopamine.” But the 24-year-old Midwesterner hasn’t abandoned his art altogether. “I’m practicing my lightning-fast costume changes and fire breathing,” he cracked after taking the stage at the Coachella Valley Music and Arts Festival on Friday night.

In the crowd: his unofficial celebrity ambassador, Taylor Swift, and her socially influential squad, including Lorde and Jack Antonoff, who danced and sang along during his set. “I should have serenaded her or broken into a Taylor Swift medley but didn’t think fast enough,” he lamented, adding that the posse’s presence “was a surprise.”

Over a year ago, Swift anointed the Michigan native one to watch via her hugely popular Instagram account. “So ‘Electric Love’ by Børns sounds like an instant classic to me,” she wrote of the psychedelic rock song off Børns’ second EP, “Candy.” More than 720,000 likes later, the long-haired musician — who can play everything from the ukulele to the piano — has been on a meteoric rise, culminating in a prime time slot for his Coachella debut.

Despite the enthusiastic support, the singer, who added the Nordic styling to his last name simply because “it’s more fun to write,” downplayed his sunset performance. “It’s really hard to tell [how it went] onstage. I’m always in my own little world,” he said.

Despite his modesty, the fashion world has taken notice. For his WWD shoot and his performance later than day, he donned Look 9 from Gucci’s spring 2016 collection: “Turquoise lace Seventies shirt with blue wash denim high-waisted flared jeans and brown leather belt with GG detail” to quote the house’s press release that went out on Monday. Said Børns: “I’ve been wearing a lot of the new line by Alessandro Michele. He’s really amazing and I’m influenced by that a lot,” he said of the designer’s amalgamation of “patterns and colors and a mix of eras.”

Like his idol, David Bowie, his sartorial and musical styles are one in the same. That translates into “pretty contemporary production” mixed with “Seventies-inspired” sounds. “He made music permeate from his clothes. He pretty much reinvented himself on every album and he was very in tune with changing of tides and culture, and he was pretty fearless as a performer,” Børns said of the late pop icon’s influence on his approach to fashion. Although a fan of Bowie’s gender-bending look, he was quick to insist, “I’m not growing out my hair just to be androgynous.”

There is a downside to being the talk of the fest: early-morning work obligations, which sent him to bed earlier than most. “Calvin Klein underwear party? Sign me up!” he said of wishing he attended the warehouse rager on Friday night. Still, he managed to pack in enough desert action to leave him feeling “pretty dazed” the day after his well-received set, declaring, “If I wasn’t sleepwalking right now, I wouldn’t have done my first day at Coachella right.”