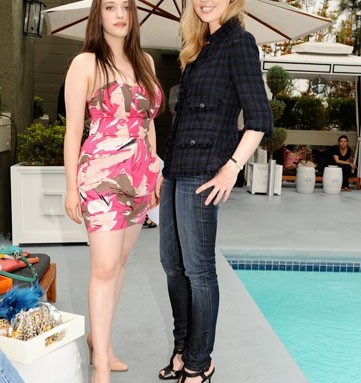 Too bad there’s not an umbrella among Coach’s new Poppy accessories. The brand hosted a luncheon during a rainy Wednesday afternoon on the rooftop of the Chamberlain West Hollywood hotel to introduce the line to starlets, who were perhaps more interested in staying dry.

“We were auditioning people this morning for ‘You Again,’ and it was sunny,” said Kristen Bell, referring to a Disney comedy she is starring in. “Who knew?”

Kat Dennings opted to cover her bright off-the-shoulder dress in a pashmina.

“I was trying to be summery,” she said. “I think I’m the only summery thing here.”

Despite the cloud cover, Melissa George wasn’t willing to part with her Benjamin sunglasses. “I love these,” she effused. “They are light enough that you can wear them inside and outside.”