The "Bubbly" singer has teamed up with her fiancé and two friends to form an acoustically driven quartet.

Life is a lot more intimate for Colbie Caillat these days.

The two-time Grammy Award-winning singer, who sold more than six million albums and more than 10 million singles during her solo career, has embarked on a new path. She has teamed up with her fiancé, Justin Kawika Young, and their longtime friends Nelly Joy and Jason Reeves to form Gone West, a country music quartet. They signed a recording contract with Triple Tiger Records in January and immediately released an EP called “Tides” that hit the top five on the iTunes Country Charts. Their first single, also called “Gone West,” is not due to be officially released until this summer, but already it’s getting airplay on SiriusXM satellite radio.

Their first tour, which included a stop at New York’s Gramercy Theater last month, is a far cry from the sold-out arena shows Caillat headlined when her singles “Bubbly” and “Realize” were at the top of the charts. Instead, Gone West showcases their voices and acoustic instruments at small venues where they trade off singing lead and intersperse the music with stories about how they met, their earlier careers and what brought them together.

In an interview prior to their New York show, the California-bred Caillat says she and Young, a four-time Hawaii Music Award winner, moved to Nashville to join their friends Joy and Reeves, who have been married for seven years. “We wanted to try a new city and knew we had good friends who could show us around.”

But the idea to team up musically started long before that. The four of them had worked together on and off for 13 years. Young had been part of her band for years and Caillat had written many songs with Reeves, but it wasn’t until the four of them toured together for Caillat’s album “Malibu Sessions” about two-and-a-half years ago that the idea gelled.

“It was the first time we realized touring could be that much fun with four-part harmonies and acoustic instruments, so it sparked the idea,” she says. “Then Nelly said, ‘Let’s stop talking about it and make it official.’”

Joy admits that while it seemed like a good idea, “we didn’t think it would work until we wrote our first song together. Hearing all our voices meld together on a song was different than just singing live together.”

The song, “Gone West,” is intentionally autobiographical, the Hawaii-born Young says, and is intended to introduce the band to fans. 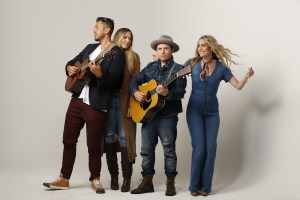 They also made a video right away, which “tells the story lyrically,” Young says, with scenes of each hometown and a festival-like vibe of the four of them dancing, clapping, singing and playing in front of a campfire.

While Gone West (the band) is targeted to the country music market, Caillat says it’s not so different from what she’d done as a solo artist.

“We’re still doing the same kind of music,” she says. “It’s organic, all acoustic instruments, harmony-driven, storytelling in our songs.”

Joy says the rest of their songs showcase the group’s tight harmonies and acoustic instruments, which is in Nashville’s wheelhouse.

“Country music has traditionally been a wonderful space that cultivated storytelling and harmonies and that just happened to be the kind of record we wanted to make,” Young says.

Reeves says, “From the start of us making music, it was just us singing songs on our guitars. We just make music that’s true to us and it falls into wherever it falls into.” He adds that while Caillat’s music was primarily categorized as pop, “country embraced Colbie’s first album. I remember I was in Nashville when that album was new and I was hearing her songs on the radio there and CMT was playing ‘Bubbly.’”

Country or pop, the Nashville community has embraced the quartet, even inviting them to play their first-ever show at the Grand Ole Opry. It didn’t hurt that Joy’s other band was the JaneDear Girls, a country music duo, and Caillat had collaborated with everyone from Brad Paisley and Trace Adkins to the (then-country) Taylor Swift.

As artists, they’ve been influenced by many types of music over the course of their careers.

Callait cites Coldplay, Tom Petty, Fleetwood Mac, the Eagles, Lauryn Hill, Boyz II Men and “anything harmony-driven” as her favorites. Joy singles out Dan & Shay and Maren Morris, while her husband says he most admires Kacey Musgraves for breaking out of the mold. “What’s made her famous is the quality of her music, not the radio success she hasn’t had,” he says. “But this is a world where you can become that well-known without major press or radio — as long as your music can be heard, and people can love it.”

In fact, Caillat is well-known for having the Myspace networking web site launch her career. Admitting that she didn’t even know what social media was at the time, the self-professed introvert wound up being the number-one unsigned artist of her genre, a phenomenon that led to her initial record deal.

Hoping that lightning strikes twice, Gone West has embraced all the social media sites to help get its name and music out with active Instagram, Twitter and Facebook feeds.

With their sound established, they’ve also worked on their look. They’re partial to denim and their style has a bohemian edge. Levi’s, Free People, Mother Jeans and G-Star are among their go-to brands.

Caillat is the “unofficial stylist in the band,” Joy says, and the group is partial to blue, green and maroon, “very earthy tones and vibes,” Caillat says.

“You also had a vision early on that you didn’t want to look like every other country band and keep some of our unique personal style,” Young reminds her. “But it has been challenging because we’ll all put on something we like and stand next to one another and go, ‘Oh no, that doesn’t work.’”