The actor has taken on a bigger role as writer-director — in addition to lead actor — in his intriguing new film, “Collaborator.” 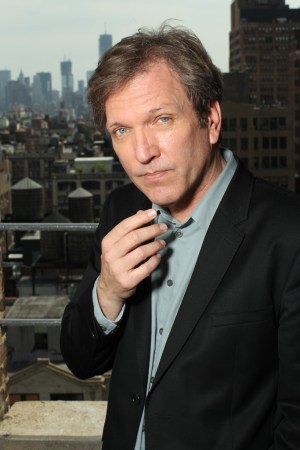 Martin Donovan has the kind of low-key good looks that make him an everyman. So it isn’t surprising that he has played all kinds of parts, including “horrible, despicable rapists and murderers.” Now he has taken on a bigger role as writer-director and lead actor in his intriguing new film, “Collaborator.”

The film, which will begin an engagement at Hollywood’s Egyptian Theatre on Friday, and can be seen on cable VOD services, is not the sort of movie that can be summed up in a sentence. It concerns Robert Longfellow, a playwright once hailed as the voice of his generation, played by Donovan, who has fallen upon critical hard times. He goes from his New York base to California to visit his mother, partly looking for work, and finds himself in a seemingly congenial encounter with Gus Williams, played by David Morse. Williams is a slightly older ne’er-do-well who is his childhood next-door neighbor, and who, when a SWAT team comes to arrest him for shooting a gas station attendant during a robbery, takes Longfellow hostage.

The story was sparked by an incident in Donovan’s past, in which a next-door neighbor from his own youth was cornered by a SWAT team and was found dead. The character of Gus is that of an ex-con, but he also reflects some class realities in this country, including the poor position of the unskilled wage earner. In the program notes, Donovan says, “There were the kind of guys that I knew that were like Gus, the sort of not bona fide Hells Angels, but guys that were into motorcycles, tattoos, biker boots, T-shirts and Marlboros and Coors beers. And there were those guys, that whole crowd when I was a kid that used to always scare the hell out of me.”

Donovan says he had long wanted to write, but that he wasn’t in the right frame of mind for it until recently. Although he found writing difficult, that was nothing compared to raising money to make the film, and the way in which funds would seem to come together, then disappear.

“The financing nearly broke my spirit,” he says. “The money would be promised, and then it would fall through. I would hear, ‘If we don’t get $30,000 by three o’clock, the crew is going to go home.’”

Though unpracticed in the financial side of the film business, Donovan clearly had the macroeconomic picture on his mind while writing.

“This is the first time since the Thirties that we’ve had an opening for a kind of radical critique of capitalism,” he notes, pointing out that the top tax rate during the Kennedy administration was 90 percent.

Donovan is appearing on Kelsey Grammer’s series “Boss,” but he’s also writing and preparing for the next film he will direct. Something that he said about acting seems to apply here: “I always say I became an actor out of survival. This was something that (a) I had an affinity for and (b) I could do well. I felt that I had to pursue it. It didn’t feel like a choice.”