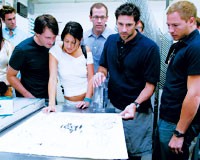 LOS ANGELES — A lecture at the Los Angeles County Museum of Art on the nuances of printmaking is not the first place you would expect to find a group of twentysomethings on an early Saturday morning.

But that’s exactly what Bettina Korek, 25, envisioned when she spearheaded the museum’s Avant Guard group: a cluster of young, well-to-do museum patrons — and budding collectors — who meet to learn about art.

“The goal is activating their own interest in art,” explains Korek, a native Angeleno who is also LACMA’s major gifts assistant. “A relationship with art is lifelong.”

The list of Avant Guard members includes such illustrious surnames as Rothschild and Firestone, but there are also L.A. types such as movie producer William Sherak, former New Kid on the Block Joseph McIntyre and Fox Cable Networks’ David Nathanson, whose parents are the prominent local collectors Ron and Jane Nathanson.

Members say it’s a love of art education, not parties, that drew them to the group. Former New Yorker Mary Firestone, who attended Princeton with Korek, joined for cultural enrichment. In New York, she says, “the emphasis is more on the social than the art. That wasn’t so appealing to me.”

For an annual $1,000 contribution, members support one of the country’s largest encyclopedic museums (its permanent collection spans from antiquities to modern pieces) and learn how to play ball in the art world. Patrons meet gallery owners and brokers, view personal collections, take private curator-guided tours through museums and meet with artists. These perks smooth the way for members to become savvy collectors. Korek encourages them to break into to the market by buying prints. “I tell them there are different levels of collecting,” she says.

Avant Guard supporter Sherak, 28, a former watch collector, bought his first piece at the L.A. fine print fair at LACMA in January. Korek and a curator both eyed the piece before he closed the deal. Now Sherak finds himself purchasing prints by Mel Bochner and photographs by Charlie Bidwell. Nathanson’s tastes lean toward Raymond Pettibon drawings and Chris Johanson caricatures. Though she’s yet to buy her first piece, Firestone admires painter Elizabeth Peyton.

“As you see more, you start to see the craft in it,” says Sherak, gesturing to a Richard Serra print hanging in the LACMA workshop. “ A year ago, I would have looked at one of those and said, ‘It’ s a big black line.’ Now I look at those and I would love to have one.”

At the Saturday morning lecture, the group learns about the printmaking process by example. An artist applies several layers of toxic chemicals to a metal plate and runs the piece through a huge press. Throughout the 30-minute process, the group poses questions such as, “Does the number in a series affect the price?” and “ What do you do with the original plates?”

Beyond collecting, these Angelenos see a window of opportunity for their community. “People who grew up here have an interest in turning Los Angeles into the same kind of center of art with the same prestige that other cities already have,” says Jamie Kantrowitz, a former member of the Whitney’s contemporary group in New York, who moved back to L.A. in 2003.

“For the first time, the creative enthusiasm in our ability to produce entertainment is now finally translating into the fine-art world,” says Nathanson, 27, who adds that new galleries seem to be popping up every week in L.A.

Korek’s dedication to the group has galvanized other members to get involved. Kantrowitz, who works for Rock the Vote, wants to collaborate with Korek on staging an art and politics seminar before the upcoming election. Firestone, an actress, has spoken with Korek about organizing film screenings.

Korek, meanwhile, has her own plans for the Avant Guard. Upcoming activities include a lecture from a Sotheby’s specialist about buying art at auction, and she’s weighing the idea of a black-tie fund-raiser for the group.

“As we build our own collections and relationships with dealers and galleries themselves, the future generation will drive the art community in L.A,” says Nathanson. “Talking with Bettina, one of the most enthusiastic purveyors of art education in Los Angeles, it’s infectious.”