“What you got? Show me the spreadsheet.”

Colson Baker, also known as his musical alter ego Machine Gun Kelly, has just arrived in Park City, Utah, but as he struts through the front door of a condo near Main Street on FaceTime with his young daughter, there are more pressing matters at hand: Girl Scout cookies.

“OK. Dude, this is all I’m going to say: Girl Scout cookies aren’t that serious. That’s all I got to say. Even though I support…”

“All right. I’m just saying. Well, let me get those boxes of Samoas I wanted. You got my order, right? I’m about to do this shoot, though, all right? Bye, love you so much.”

He turns to greet Jason Orley, the first time director of “Big Time Adolescence,” with a high five.

Orley wrote the screenplay five years ago — another first — and was finally given an opportunity to make it this past summer. “The story is pretty personal to me about where I grew up in the suburbs of Detroit, and the movie’s really about bad influences, and this young boy having this hero who is a bad influence,” says Orley of the film, which stars Griffin Gluck as the school kid and Pete Davidson in his first lead feature role as Zeke. “And he doesn’t really get along with the kids in his own school, and he falls in with this group of 25-year-old degenerates.”

Orley turned to Davidson for help casting that group of degenerates. Without much time to rehearse, Orley wanted his sidekick relationships to be strong from the beginning. Baker and Davidson were already close friends — “best friends,” even — and were in the process of filming the Mötley Crüe biopic “The Dirt” (Baker plays Tommy Lee) when Davidson brought up the prospect. (Davidson also recruited Jordan Rock, younger brother of Chris Rock, for “Big Time.”)

Friends aside, Baker also credits the script’s youth appeal as a factor for his excitement about the project.

“This was the first time I’ve read a script about something like lower-middle-class suburban kids and just the trials and tribulations of growing up,” says the blonde 28-year-old, who stands 6 feet, 4 inches and has been the face of John Varvatos; he also starred in meme magnet “Bird Box.” “As an actor, you want to get one of those parts, like ‘Super Bad,’ one of those roles that just stick with you as a kid, that you grow up with.”

Baker wants everyone to know this: the scene in which he gives Davidson’s character a tattoo is real. “That tattoo is still on his leg, for life,” he says. “It’s one of his better tattoos.”

In addition to the tattoo — and Davidson paying kids on the street to “shut the f–k up” while they were filming — both actors made another notable purchase while they were in Syracuse filming. “Me and Pete bought cars off the street,” Baker says. “He bought a s–tty Cadillac and I bought a ’79 Camaro. It’s yellow and its a drag racing car that can only be driven for 15 minutes at a time.” (Unclear whether the car ever made it out of Syracuse.)

Later that evening, Orley and Baker were planning to head to Salt Lake City to watch Davidson perform stand-up at a comedy club. The following evening, Baker was scheduled to perform a concert as Machine Gun Kelly at Park City Live on Main Street following the film’s premiere.

“I think we’re going to f–k the town up for the next 24 hours,” Baker says of his festival plans. “And I’ll change the narrative when it’s a different movie, but this isn’t the movie to hold back on.” 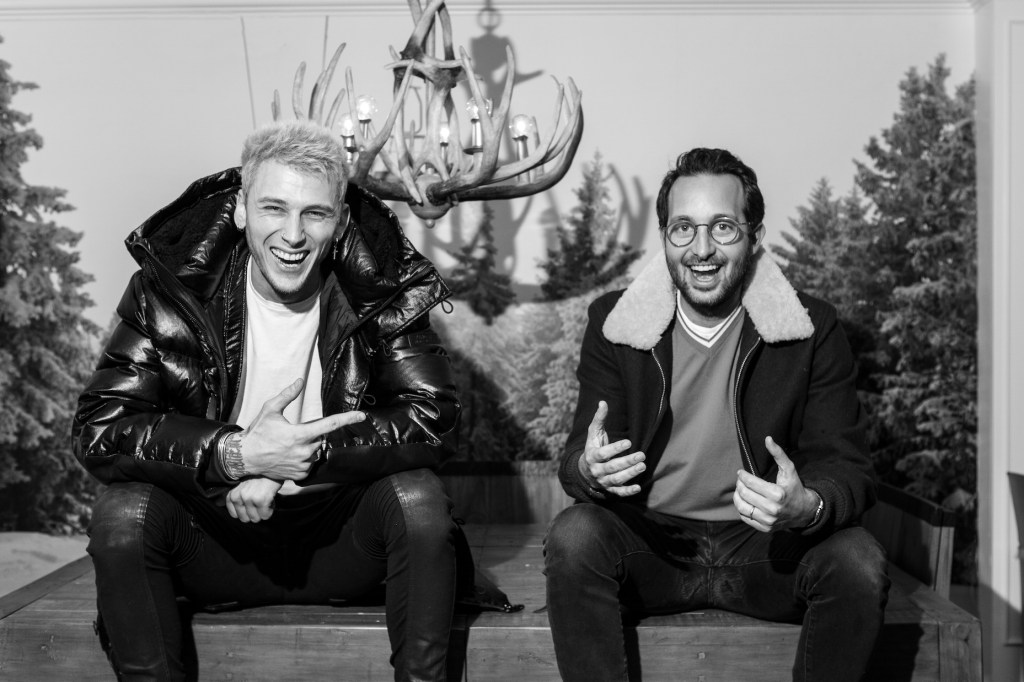