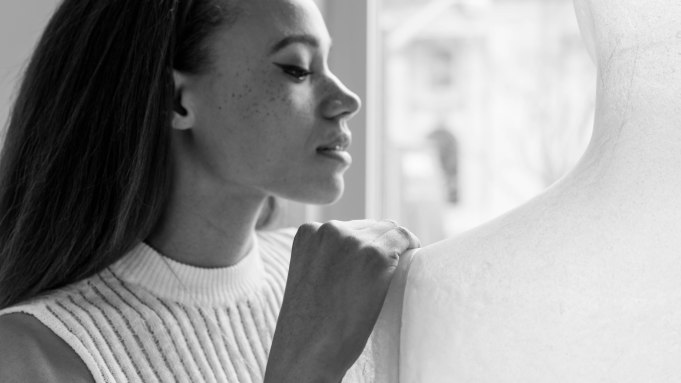 “It’s always nice to go home,” said 25-year-old British musician Jones a few months back, in town for her first interview in New York. “But I love to see new places as well and absorb the culture.” She’d just arrived in from playing SXSW in Austin, eating her way through the city and catching acts like Kacy Hill between her four back-to-back sets. “I loved the food, the barbecue,” she said, settling in on a couch having wrapped her shoot. “The weather was really hot at first and then we had a thunderstorm — I’ve never seen the sky like that.”

Having developed a U.K. fan base that includes Sam Smith — he declared her music “f–king beautiful” on Instagram and Twitter — Jones is setting her sights on American audiences. Her latest single, “Melt,” was released last week, and her debut album is due this October.

The East London-raised musician credits her mother with planting the seed for a career in the arts. “My mum is a writer, she’s very creative,” she said. “She loved music, she was always playing music, so I used to just kind of sing along with Stevie Wonder and Bob Marley, things like that.”

She discovered a talent for lyrical writing in childhood. “I’m an only child, so I spent a lot of time alone writing in diaries, and eventually my diary entries turned into songs, and I just kind of taught myself to sing,” she said. “When I’m writing lyrics I always think, ‘Would my mother be proud of what I’m saying?’”

What she likes to say through music is, unsurprisingly, often about love. “I guess I’m inspired by thought and life and obviously love, and that’s always such a natural thing to sing about,” she said. “I don’t think people ever get tired of hearing love songs. I think a love song can just hit you.”

Aside from her own “modern soul, pop, electronic” songs, she on occasion has put her spin on another track; earlier this year she released a cover of Calvin Harris’ chart-topping “How Deep Is Your Love.” “Sometimes it’s nice to just take something that’s really different from your own music and make it your own,” she said. “Even if I do a cover, I try and make it different and do it [with] my own style. I just always liked the song and I’d come back from a holiday and was just feeling really happy and bright.”

That energetic brightness is something she’s finding in a lot of her American audiences. “The American audiences have been really, really enthusiastic,” she said. “I love London, but people are really reserved. They don’t really express as much emotion, so it’s been good. A lot more energy. A lot of people are coming up and asking questions [at shows in the U.S.], just finding out where I’m from and what I’m doing next. I’m just getting excitement from people.”

And as the American fans take to her, she’s adapting quite fine herself. “I arrived yesterday,” she said, “but I love it already.”