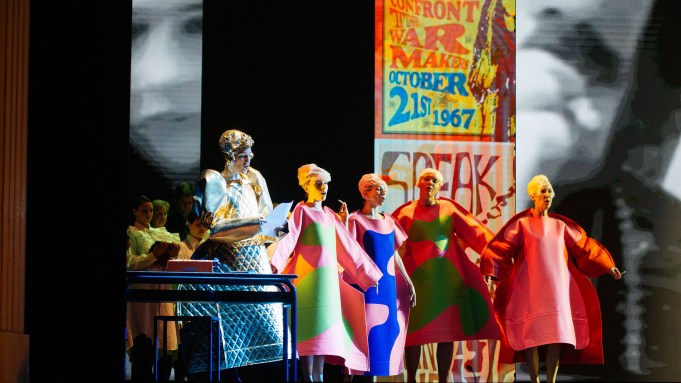 When soprano Constance Hauman donned her Queen Elizabeth I costume for a production of “Orlando” premiering Sunday at the Vienna State Opera, she was overcome with emotion in her golden cage of a dress that abstractly suggests bee anatomy, and telegraphs otherworldly grandeur.

“I have to say, of the more than 70 productions I have done in my career, I have never seen or will see again costumes as spectacular, as beautiful and carefully crafted,” she marvels. “Rei has been able to channel Olga’s music into costumes without ever having listened to it.”

The Rei in question is, of course, Rei Kawakubo of Comme des Garçons, and the Olga in question is avant-garde Austrian composer Olga Neuwirth, the first woman to be commissioned by the venerable institution in its 150-year history.

In short, it’s a monumental meeting of two major mavericks from different fields — three if you count Virginia Woolf, whose 1928 feminist classic feels more vital and relevant than ever.

“As I’ve chosen this incredible, visionary book by Virginia Woolf about Orlando’s queer journey through different centuries of patriarchal history for an opera in a traditional opera house, I think my statement is clear,” Neuwirth explains in an interview. “I’m aware that if I’m the first, there has to be a second and so on. The world is ready. For me, it had to be an opera with diverse people from diverse genres that would shake up this venerable old opera house a bit.

“Woolf depicts and criticizes changes in politics, etiquette, societal constraints and literature and that’s why I had also chosen this book,” she adds.

Kawakubo and Neuwirth — both compact, tightly wound bundles of energy — have long shared the same penchant for questioning things via daring creativity, even if they only met three times in recent months, most recently when Kawakubo flew from Tokyo to Vienna for three days of fittings.

Asked about her feelings about Woolf’s novel, Kawakubo says: “I find it interesting because of the issues it raises about gender and time.”

Not that those subjects impinged much on wardrobing the performers, who include Kate Lindsey in the title role.

“I didn’t take too much into account for the periods and the gender when I was making costumes,” she says in response to e-mailed questions. “I accepted Olga’s offer because she agreed that I [should] work on the Orlando theme for men’s and ladies’ collections as well as the opera. I thought the idea of a three-part project would be interesting — working on three different ways of interpreting the theme.”

Kawakubo embraced the book’s gender-twisting, time-traveling themes with gusto, parading 17th-century ruffled confections and 18th-century civilian and military styles for her men’s show, and letting loose with an extravagant, mesmerizing riff on the Elizabethan Renaissance on her women’s runway.

The opera itself — scheduled for five performances, one of which will be live-streamed on Dec. 18 — is the third act of the designer’s trilogy. Across 19 scenes, Neuwirth extends Orlando’s original narrative from the 16th century up to 2019.

To be sure, it was a dream come true for Neuwirth that Kawakubo accepted the project. When she sat down to pen the libretto with New York-based writer Catherine Filloux in 2014, she had already inscribed the Japanese designer as her wish to outfit “Orlando.”

And she used her first commission check to buy a Comme des Garçons jacket.

“That this dream became true is overwhelming for me as she was one of my artistic role models when I was a punk in the Austrian countryside in a charming but xenophobic region near the Slovenian border,” she says, explaining that the “tradition of the well-behaved and silent woman ‘behind the stove'” was still very much alive in the Eighties when she was a teenager. “I rebelled against the rigid boundaries of social life and gender differentiation and was looking for creative female role models and found them in Valie Export, Elfriede Jelinek, Patti Smith and Rei Kawakubo.”

Asked how the performers reacted to Kawakubo’s costumes, which swing from Baroque to punk, from prim to psychedelic, Neuwirth was blunt: “Some were a bit irritated by the opulent majesty as they have never seen or worn such costumes; others immediately recognized the distinctiveness and uniqueness of these amazing costumes and were enthralled.”

Justin Vivian Bond, a cabaret artist who portrays Orlando’s child in the opera, was among those who had some reservations, but only because “the original costume designed for my character didn’t seem to fully complement the story I am trying to tell. So we had a conference and it was decided I should choose something more personal. The sensitivity of Rei and her team when I voiced my concerns was incredibly moving and validating.”

And now Bond is gung-ho to stride onstage.

“The brilliant collaboration between these two powerhouses is phenomenal. I can’t begin to express how lucky and honored I feel to be part of it,” says Bond, who is transgender. “The combination of visual and technical brilliance of Rei Kawakubo is singular and unparalleled.”

“I adore the costumes. They are highly imaginative and so beautifully made. I feel honored and touched as each piece is an artwork. The singers are transcended into a new dimension by wearing them onstage,” she enthuses. “I feel like Rei Kawakubo has ‘channeled’ my music into fabrics, into sculpture-like objects in the tradition of Oskar Schlemmer’s experimental Triadisches Ballett [‘Triadic Ballet’]” which made its debut in 1922 and helped popularize the Bauhaus aesthetic.

Of Kawakubo, Neuwirth says she is in awe of her “unruly creative universe.”

The composer lauds “Kawakubo’s approach to an androgynous look and how she joyfully plays and deconstructs fashion topoi and materials in a brave and courageous way” and her “interest in the stylistic devices of distortion, allusion and the blurry zone between reality and fiction to question man-made norms in art and life.”

Asked about her impressions of Neuwirth, Kawkakubo responds: “She seems extremely passionate and strong-willed.”

To be sure, the opera promises to send ripples with its hybrid of music, fashion, singing in different styles, along with acting and video components.

“Her courage to be a fresh voice, to stay true to her vision and her style, inspired me to expand my world from opera to theater, to pop, to songwriting and arranging and producing,” notes Hauman.

Yet it’s the subject matter of Neuwirth’s opera that is likely to reverberate the loudest.

The composer describes it as a “striving for freedom of expression, originality and fluid identity” and Orlando as a “remarkable human being who questions every kind of duality and experiences a sense of ‘in-between-ness’ in both life and art. Orlando lives in a realm between history and tradition, and continually breaks the rules imposed by society.”

Hauman was emphatic that Neuwirth’s new work is a game-changer.

“The opera world for centuries has been a male-dominated profession — and most of the roles in opera for women are victims. They kill themselves, are killed or are abandoned,” the soprano marveled. “In Olga’s ‘Orlando,’ women are set free.”

The Enigmatic Rei Kawakubo Opens Up

Rei Kawakubo on Newness, The Met in Rare Interview at Noguchi Museum