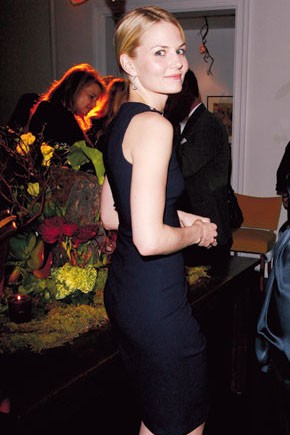 Parties these days often seem cobbled together like a haphazard recipe where the ingredients don’t quite mix (this fashion house, that charity, that premium vodka). But Tuesday night’s Boucheron dinner honoring The Museum of Contemporary Art Los Angeles was the exception.

Styne’s Lucques catered the party — the menu of sea bass and salad was meant to be a light post-Thanksgiving repast. But she had other reasons for wanting to come: “My grandfather [composer Jule Styne] wrote ‘Diamonds Are Forever’ so I’m doomed to a life of lusting after jewelry.”

After dinner, the crowd retreated to the living room for dessert and an acoustic performance by one of Leak’s clients: folk singer Jesca Hoop. The intimate evening seemed to bring out the warm, fuzzy side of many of the couples, including Griffiths and husband Andy Taylor. “We just made out in the bathroom,” she admitted.