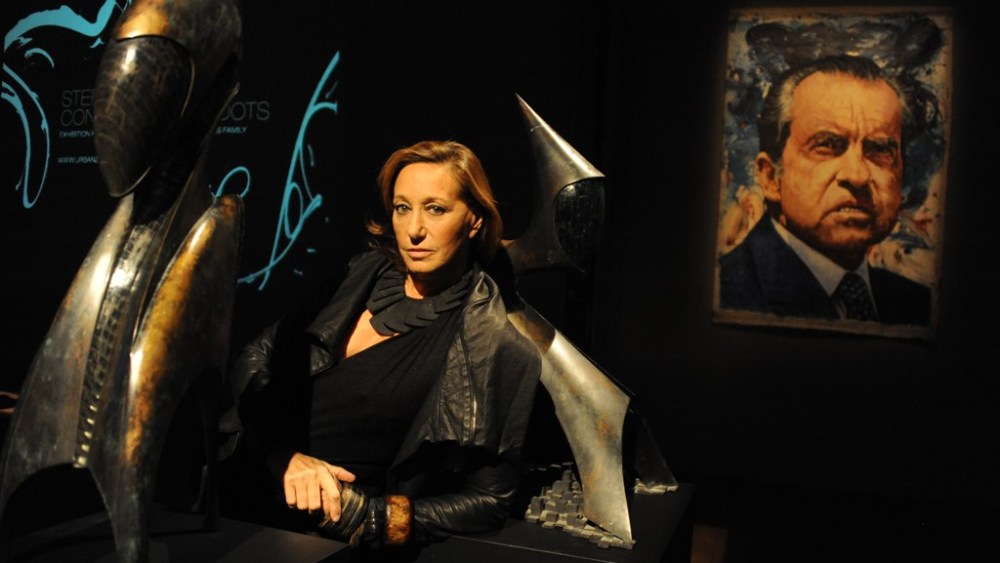 NEW YORK — To the industry, Stephan Weiss was best known as Donna Karan’s husband and the business mind who accompanied the designer on her creative journey. That the executive, who died of lung cancer in 2001, was a sculptor and avid motorcyclist was also no secret, but beyond some examples (i.e., the bronze dressage horse at the Wynn Las Vegas, the apple in Hudson River Park here), there is little awareness of the breadth of his body of work.

Karan is set to change that now with “Connecting the Dots,” an exhibition of Weiss’ paintings and sculptures and an accompanying book by Assouline.

“Nobody has really seen Stephan as an artist, they have always seen him as my partner in business,” said Karan, during a walkthrough of the show at Weiss’ former West Village studio. “Stephan never wanted to be out there as an artist. He used to say that one of us out there was enough; two, he couldn’t deal with. He was absolutely right. We wouldn’t have had any free time.”

Weiss and Karan shared a unique connection, which still inspires and informs her today. “To me, my whole life is connecting the dots,” she said. “It’s connecting mind, body and spirit; fashion, philanthropy and commerce; cotton, cashmere and candles, family.”

This is the first time she has decided to put Weiss’ expansive collection in the spotlight, and the moment is filled with emotion. “I have never been so nervous about anything as I have about this,” she said.

Weiss would randomly put dots on paper and connect them to create new shapes, and the presentation is a reminder of his ability to play with forms, which often demonstrates a sensual movement. The fluidity of his work mirrors Karan’s own design aesthetic, and Weiss created the sculptural bottles and packaging for some of her fragrances.

“I don’t think there was anybody more creative than my husband, but creative without ego,” she said.

The pieces range from string paintings — one of which is embedded with a surgical shirt — to curved and twisted steel mimicking the movement of those strings, and Lucite and stone forms that mimic the fluid lines of a female torso.

Several of the large bronze objects were completed after Weiss’ death, including a camera and roll on film and painted bronze figures living on the edge quite literally, with one such example walking off an edge reading The New York Times. There are also miniature bronze Oreo cookies, a Coke can and several bronze books. “He saw ordinary objects in an entirely different way than we would,” Graham noted.

One side of the studio features a small replica of Weiss’ studio with pens, pencils and his sketchbooks. There is even a red Ducati bike of Weiss’ replete with his racing suit.

The exhibition is supplemented with video footage of Weiss in his studio working, and with Karan and his family enjoying his free time.

“I always knew what I wanted the studio to become and had told Stephan that I wanted to create a space and place for people to come together,” Karan recalled. “He said to me, ‘Whatever you do, take care of the nurses.’ That was my calling with the Integrative Therapy Program.”

Several of the bronze pieces were produced in limited editions, and will be sold to benefit the Urban Zen Foundation program.

The show officially opens Wednesday night when the designer presents her annual Apple Award to Mayor Michael Bloomberg on behalf of New York City at the space.

For Karan, working on the project seems to have brought her even closer to Weiss. “He is with every breath I take,” she said. “I wouldn’t be doing what I do if it weren’t for my husband. He was my inspiration and made everything happen. He is always with me, probably laughing at me, saying ‘Oh my god, Donna, I can’t believe she is doing this.’”

The experience has also given her a renewed sense of comfort. Having Weiss’ art back in the studio where it was first created makes the space she uses for events and fashion shows feel a lot more like home. “Maybe now,” she said, “I am ready to move in.”