The son of Snoop Dogg left behind a football career for a life of creativity, and says now is his time to be heard.

“All the stars were just aligned throughout quarantine” is a jarring thing to hear but, then again, Cordell Broadus has had a different quarantine experience than most.

The 23-year-old son of Snoop Dogg is on Zoom, seated outside on a picnic bench from “the compound,” as he calls it, in Inglewood, Calif. He’s been spending much of his time there as of late, though he does keep an apartment in Westwood near UCLA, where he was once a member of the football team and where he still trains every morning. Since leaving his football career behind in 2015, Broadus has wanted to pursue creative outlets. And it has just so happened that the creativity has been coming easily during these days locked in at home.

“I just feel like it’s the right time to use my voice and my platform and to inspire people to do the same, because a lot of people have a lot on their chest and their mind right now,” Broadus says. “I feel like mental health is a big issue and the only way to reverse that is to speak with some of your mind and get whatever’s on your chest, off your chest.”

In May, Broadus released his first single, “Bron & Bronny,” which features his father, through his newly founded record label Real Queen Sound. Broadus also has been working on a football summer camp, which has been put on pause due to the pandemic, and he’s working in the film industry, developing a documentary on his family with Netflix and working on a feature film from Kenya Barris.

“To be honest with you, I’m real critical with my creativity,” Broadus says. “So it was hard for me to release [my music]. My partner, JJ, and I felt like this was the best time to release the single, during quarantine and all the crazy stuff that’s going on in the world. Through my music, I just want to represent myself and I want to represent individualism. And then just to be unique — I feel like a lot of people are chasing trends or being followers. I feel like when you create, it’s really taking on a leader standpoint and being bold and being brave.”

Broadus says the most common reaction to his pivot into the music world is shock, not so much because of following in his father’s footsteps, but because of his football background. 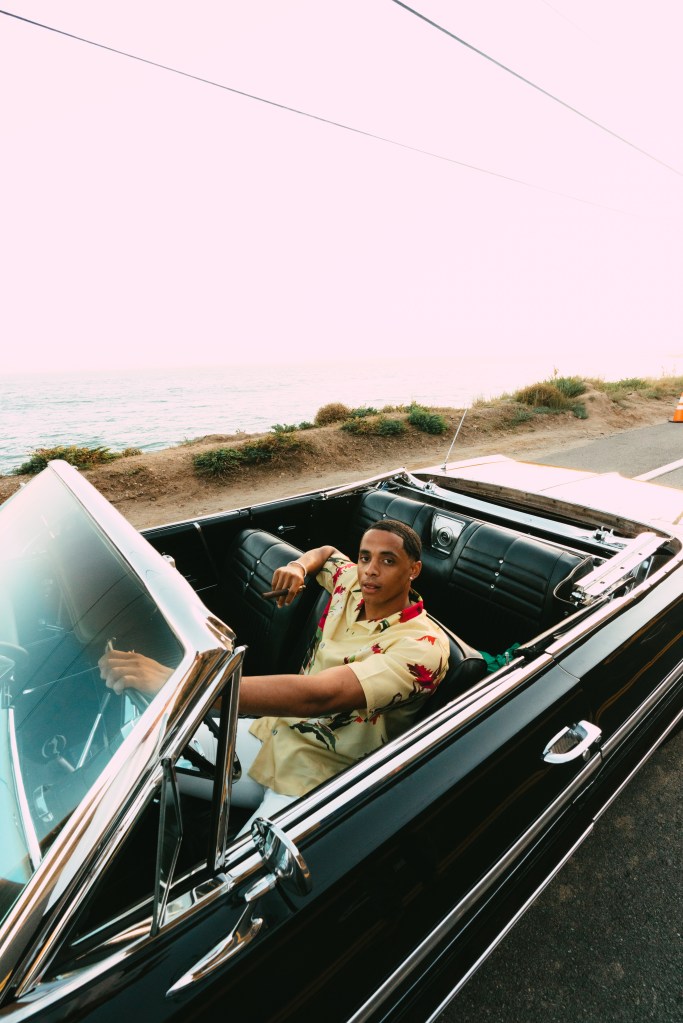 “A lot of athletes tend to not use their voice creatively, so I think the reaction was unexpected,” he says. “Honestly, just believing in myself and knowing that I’m not perfect and I’m cool with that. I’m comfortable with that. I feel like it resonates with people, because a lot of people are trying to be perfect because of social media and all the edits that we have and all those types of things. I just like to be raw and uncut. I feel like not putting myself in a box is key. Because I feel like our culture is marginalized, so me doing something that isn’t the norm is going to set me apart from the rest of everybody that’s doing it.”

Musically he rattles off the names of James Brown, Prince and Aretha Franklin as influences.

“And papa?” his publicist asks.

“Oh yeah, my papa,” Broadus responds. “But I would say he’s an inspiration as a father, more than as a musician.”

Broadus left his career as a wide receiver with the intention of building a life in film and fashion, but found it took some time for things to get off the ground.

“I thought it would be easy to come up with ideas and execute your vision, but it’s been the complete opposite,” he says. “Four long years went by. When I left [football] a lot of people gave me backlash, but a lot of people also reached out and told me I was brave and that was something that they wish they could do. But due to them being marginalized and only being able to take care of their family through sports, it was like that was the only option they had. My mind has always been creative and I just felt like in 2014, 2015, there was a lack of representation of people who look like me in the creative world. I just was tired of wishing for somebody to do it and I put that on myself to do it.”

He’s worked on film projects for Dior and Kangol in the fashion space in the past few years, but the upcoming documentary, which he says will be called “Son of Kings,” is what he sees as his big break into the movie world.

“The documentary follows my family’s lineage and the journey of a Black man in America. My whole life I just always heard stories about my family and the legacy that, not only my dad but my grandfather and the ones that came before us. I just always wanted to tell something that I knew, because I took a writing class at UCLA for film and the professor always said, write what you know. I know my family, so I want to start right there in my film career,” he says.

And he’s still working in the sports world, through his agency Channel 21, which was set to host a football camp this summer, pre-COVID-19. His mission with the agency is to show athletes as more than just sports, “athletes who want to think outside of the box,” he says. “I was a kid once, so I knew how it felt, as far as nobody speaking to us outside of sports.”

While it’s odd timing to feel like your moment has begun in the midst of a global pandemic, Broadus seems sure of his path, and of seizing his moment.

“I just think I’ve matured in the business and I matured in life, so I see things for what they are. Because when you first start in something, you kind of have an immature perspective, especially when you don’t know that field,” he says. “I think I’ve been in it and I’ve been a student, so I’ve just been soaking up a lot of the game, and now I just feel like I’m ready to go out and play.”