The 27-year-old daughter of Jamie Foxx makes her producing debut on new Netflix series "Dad Stop Embarrassing Me!" inspired by their relationship.

There are, one can imagine, plenty of perks to having a father as famous as Jamie Foxx. But for an introverted teenage girl, the fact that your dad is who he is can only be embarrassing — so says Foxx’s 27-year-old daughter Corinne Foxx, who has teamed with her dad for a Netflix series called “Dad Stop Embarrassing Me!” which she executive produces.

“I think the title is very self-explanatory,” Foxx says, over Zoom from her house in Los Angeles. “But growing up with my dad, his personality, he’s very outgoing. He likes to be the center of attention. He’s performative, he’s loud. He’s funny. Which is great for a performer. But the father to a teenage daughter, maybe not so great.”

In the series, Jamie plays a version of himself, while Corinne is played by the actress Kyla Drew, as a 15-year-old who is ever embarrassed by the over-the-top nature of her dad’s antics. The series is inspired by the relationship Corinne and Jamie had when she was a teenager, and she sifted through her diaries and memories for the various plot lines.

“There are so many funny stories, especially in my teenage-hood, of me being embarrassed by what he’s doing, or the way he’s dressing, and the amount of attention he’s drawing to himself,” she says. “My dad and I have always said that we’re yin and yang. So he’s extroverted and he loves to be the center of the attention and I’m more introverted and reserved and quiet. And so oftentimes it felt like I was his parent and he was a child.” 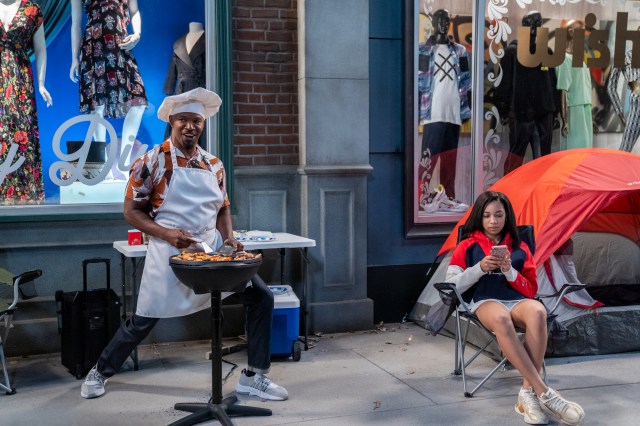 Growing up, Foxx was always interested in being in the entertainment industry, but was also conscious that it was precisely what people expected from her.

“Part of my rebellion was going to college because I had a lot of people telling me, ‘You don’t have to go to college. Doors will just open for you and just go into the entertainment industry,’” she says. “And I was like, ‘No, I want to get my degree. I’m going to rebel,’ which is the strangest way to rebel.”

After graduating from USC, she moved to New York City to work in advertising but quickly realized she was just ignoring her actual interests for the sake of what others thought of her. She promptly quit her job, returned to L.A. and began to study acting.

“Dad Stop Embarrassing Me!” only managed one day of shooting before sets were locked down in March 2020. Foxx and the rest of the team spent the following months writing, trying to figure out what to do, but she also dabbled in side projects: studying for the LSAT, writing a feature script. She is interested down the line in potentially exploring public office, and remains dedicated to philanthropic work with the National Alliance of Mental Illness and Girl Up.

“I’ve always trusted the process and I’ve always trusted whatever the next phase of my career looks like. And right now producing feels like a good fit,” she says. “And so we’re leaning into that and creating more shows and things like that.”

The show marks Foxx’s first time producing, after getting her start in modeling before transitioning to acting and now behind-the-camera work. 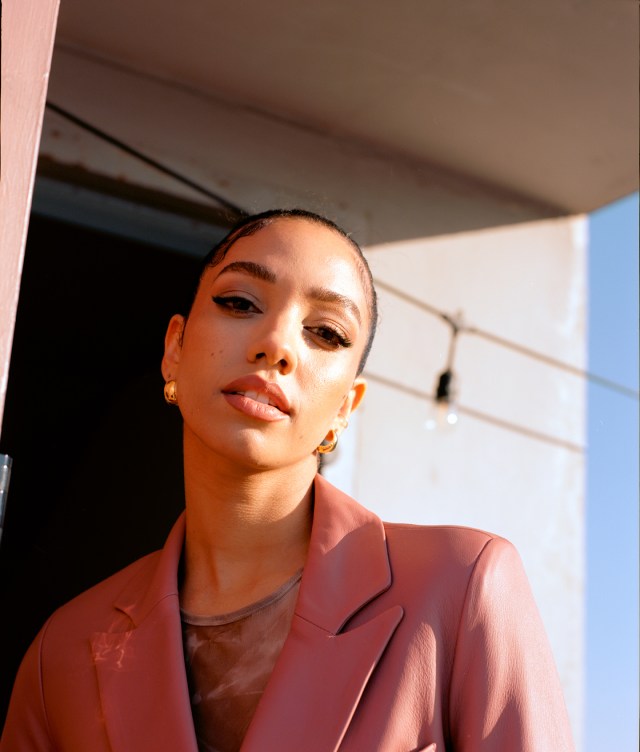 “It’s been really cool to see how my career has just naturally morphed and changed,” she says. “There were a lot of learning curves [with producing the show], especially because I was the youngest and the only female producer part of the show. I was sitting in a lot of big rooms.” Luckily, she had the upper hand of knowing the show’s material better than anyone else.

“And it was cool because I was really my dad’s boss,” she says. “My dad was the star and I was his boss and I was like, ‘you better get there on time.’”

The roll reversal seems to be working out all right for their dynamic.

“Oh, he loves that I’m his boss,” Foxx says. “He believes in me so much. He really gasses me up and makes me feel confident to walk into a room where I’ve never done the job. His dream is to see me in this role and he’s always imagined it for me. And so he listens to me because I have to call him, and I had to make some tough calls about storylines that he was really attached to or just any type of creative choices. I had to be the bearer of bad news sometimes to him and he really would take it well. They actually also leaned on me a lot. They’d be like, ‘Hey, can you call your dad’ and I’d be like, ‘Yeah, I will.’”

Nasim Pedrad Is Chad, a Teenage Boy Learning His Way