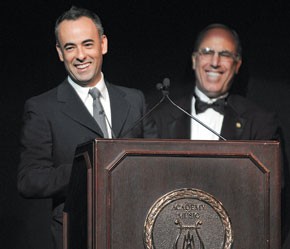 The award recognized Costa’s influence on design education and his success in the fashion industry. Prior to joining Calvin Klein, Costa held design posts at Gucci, Balmain Couture and Oscar de la Renta.

“I feel very grateful and lucky to be here,” Costa told WWD before the fashion show. “Representing Calvin Klein makes me proud. The brand is an amazing brand.”

Costa joined Calvin Klein in early 2002, assuming the design reins of women’s Collection from Klein himself, who retired when he sold his business to Phillips-Van Heusen Corp. later that year. In respect to taking over such a fashion monolith, Costa joked that it is a bit like “Mission Impossible.”

“Calvin is irreplaceable with what he created. Not just the clothes, but a strength in America,” Costa said. “We do the best we can with utmost respect for the label.”

In 2006, Costa was named Womenswear Designer of the Year by the Council of Fashion Designers of America and has been nominated again for the upcoming 2008 awards.

The Philadelphia university’s annual fashion show features the best student designs of the year. Since 2001, the event has been held in Philadelphia’s historic Academy of Music. On April 30, over 2,000 students and their families, faculty members, designers and fashion and apparel industry professionals attended.

In sync with the fashion industry’s proclivity for going green, this year the show was entitled “EcoCouture.” Although students did not have to meet a specific green standard when designing for the show, they were encouraged to be eco-friendly. Many designers incorporated organic fabrics and recycled goods into the core of their work. For example, one look by Andjela Vukancic featured a floor-length gown made of red, layered paper accompanied by an abstract belt constructed from shattered CDs.

Emcees for the evening were Bill Henley and Lori Wilson, the co-hosts of “The 10! Show” on NBC10. This spring, “The 10! Show” aired the second Philadelphia University/NBC10 Runway Challenge, a reality show featuring a competition between 10 fashion design students in a “Project Runway” format. The show’s winner was Regina Amato.

The fashion show was a production of the university’s chapter of the Fashion Industries Association, comprising students in the fashion design, fashion merchandising and fashion apparel management programs.