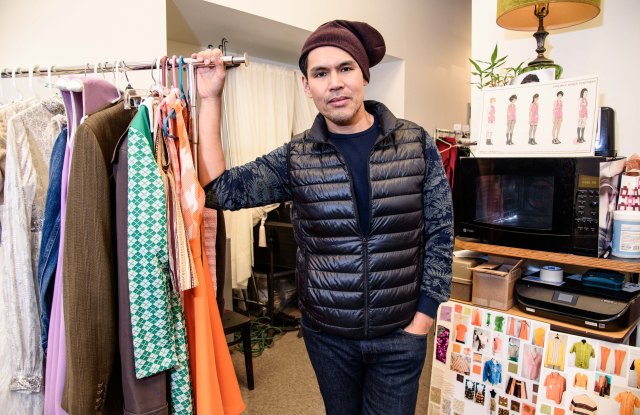 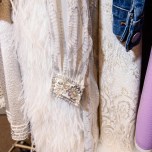 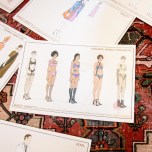 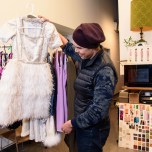 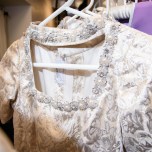 Costume designer Clint Ramos looked past the usual theatrical glam and glitz while designing the costumes for The New Group’s revival of Bob Fosse’s “Sweet Charity.”

Backstage at The Pershing Square Signature Center in Manhattan before an evening performance, the affable costume designer was eager to show off his sketches and rack of costumes. His inspiration for the show’s sartorial look was tacked on the wall leading to the cast’s dressing rooms, a photo collage of Polaroids from the Sixties — backstage photos of exotic dancers. “This is basically what inspired me to make it really very gritty,” said Ramos, pointing out a peculiar wig, a visible waistline of a woman’s nylon stockings underneath her skimpy costume. “This ‘Sweet Charity’ isn’t how it’s usually done. It’s not pretty. It’s a lot of seams showing.”

That grittier and feminist approach to the musical is what attracted Ramos to sign on to The New Group’s Off-Broadway production, a bent that reveals itself in one of the first scenes.

“The lead female character gets dumped into a Central Park lake. She gets robbed, and she gets dumped. Historically in every production people laugh, they’re encouraged to laugh. But really she just got robbed by her boyfriend, pushed into the lake. Why are we laughing at this?”

The female-centric production stars Sutton Foster as Charity, the musical’s titular exotic dancer-for-hire. It’s the fourth show that she’s worked on with Ramos and the pair began the creative process by sitting down to discuss the background and personality of her character before talking costumes.

“Sutton is so open but she certainly gravitates to what she can perform with,” Ramos said. “She finds the honesty in something and says, ‘Oh, maybe not that because I don’t know if I can pull that off.’ I’ve found that her instincts are always right.”

All of the costumes were sourced and built in New York, with some vintage pieces mixed in. Among Foster’s costumes is a short purple wrap dress, which she’s able to easily transition out of onstage, as well as white Mod-style boots, which Ramos described as “a little bit clowny and odd looking.” That look came at a steep price: they were custom-made by dance shoe company LaDuca in Italy.

“Everything is so delightfully odd, it’s not traditionally pretty and it’s strange. Like, who is this girl? You’re captivated not because she’s pretty, but because she’s interesting looking,” Ramos said.

The theater world gave Ramos a hat tip this past June, when he won a Tony Award for his work on “Eclipsed,” another show that deals with the darker side of human nature.

“I think if there’s anything that whole recognition afforded me, it’s a confidence that we can tell stories and be honest about it,” he said. “That it doesn’t need to be this theatrical, glitzy thing all of the time. I think sometimes real and smart is better than pretty and glittery.”