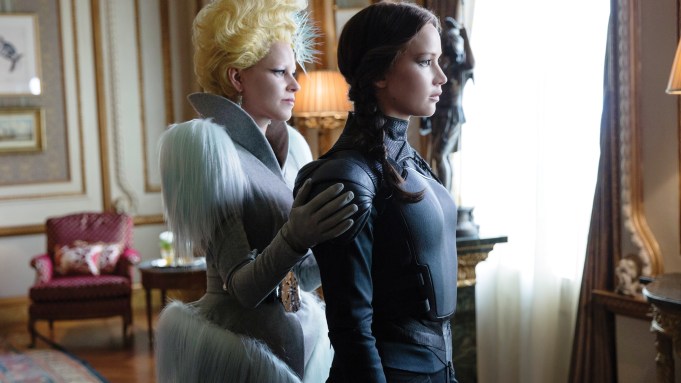 “The Hunger Games” — the franchise that generated $2.3 billion at the international box office for Lionsgate, made Jennifer Lawrence a global megastar and spawned the dystopian teen drama genre (derivatives include “Divergent” and “Maze Runner”) — is coming to a close.

The fourth installment in the series, “Hunger Games: Mockingjay, Part 2,” hits theaters Nov. 20. WWD spoke with the film’s costumers, known simply as Kurt and Bart, about what to expect — at least in the sartorial sense. The films have become known as much for their over-the-top fashions — from Katniss’ flaming gown to the Willy Wonka-esque ensembles worn by Elizabeth Banks and Stanley Tucci — as their ass-kicking action.

The costume duo are behind the looks for the last two installments. The pair, who have been working together for almost 30 years — “it’s on a trial basis,” Kurt says — have worked on some impressive projects, including “Dallas Buyers Club” and “How to Make It in America,” but never films of this magnitude before. WWD spoke with them over the phone from the Auckland, New Zealand, set of their next project “Ghost in the Shell,” an action movie based on the Japanese Manga series that stars Scarlett Johansson.

You costumed both “Mockingjay, Part 1” and “Part 2.” Trish Summerville did “Catching Fire” and Judianna Makovsky costumed the original “Hunger Games.” Were you at all intimidated joining the project, considering how big the franchise was?

Kurt: I was kind of shocked, actually. We went from doing the “Dallas Buyers Club” to this. We had never done anything of this scale before. And to do both movies at the same time [the two parts were filmed concurrently] was a big undertaking. Trish and Judianna had done such an amazing job and we’re so lucky that we got to design this portion of the franchise.

Can you give me a sense of scale? How many people did you costume for these films?

Kurt: At the end, we asked our supervisor about this actually, and over the course of both films we had dressed around 10,000 extras, which is hard for me to even wrap my head around now. But with films this big, it’s all such a machine and you have the luxury of having pre-fittings and all that. It was also so rewarding on the days when you go to set and there are 500 or 600 people in hair and makeup and dressed in our work. It was really astounding.

Bart: Well we loved designing this part of the story where you see District 13, which is this level of total austerity. But in “MJ:2” we also get to see the capital in a completely new way — we get to see the people of the capital as refugees once it is stormed.

Kurt: The elements of flash are still there for the capital residents but this is a really new situation for them as the districts enter. We really thought about how those people would react in that situation of having to flee and having to pack up their belongings, not knowing what their future would hold. It kind of led us to think about, “Well, what would they take with them? Maybe they would layer themselves so they could bring more.” Remember, these are very materialistic, so their possessions mean a lot to them. There was this beautiful editorial by Steven Meisel that we referenced a lot and it was all these models layered in fur coats and other things, as if they were wearing everything they owned. That was an interesting springboard for us.

Can you talk a little bit about the look of the people in District 13?

Bart: When we approached this, we looked at history and looked at the austere measures that were put into place in London during World War II. There were rules in the garment industry back then about the number of buttons you could have or the number of pleats you could have in a dress just to conserve fabrics. We took that same notion in that the people of District 13 were putting all their resources into the revolution so clothes are completely for utility. So it’s this kind of utilitarian, normcore I guess, unisex look. It’s made for a purpose. It’s made to last, so we use heavyweight natural fibers and kept it very monochromatic. There’s a lot of gray in this movie.

Effie (Elizabeth Banks’ character) has such fun with fashion. It was so sad to see her in the District 13 jumpsuit in “Mockingjay, Part 1.” Does she end up back in the capital and with her fabulous clothes?

Kurt: I think it was almost more interesting though for us to think about her in a new way and to strip her down. We had to think about what she would do when put in that situation — where she didn’t have her fluffy skirts and McQueen corsets. She was handed five pieces of clothing when she got to District 13 and she had to figure out what she’d do with them. That said, luckily, in “Part 2” we do have two or three outfits for her when she gets back to the capital and they’re pretty fantastic ensembles. We thought about what Effie would do once she was able to go home and had her clothes and how she’s maybe changed by the experience of 13. There’s a subtle change — a bit less fluff to her, less makeup. It’s a beautiful trajectory for her.

These are the first action movies you’ve done. Was it difficult to weigh in stunts and movement?

Bart: Jen informed a lot of the design in that sense. When we did our first draft at the first fitting, she’d go running across the room with her bow and arrow so we could figure out what we needed to tweak in terms of mobility and function. Because there’s so much combat and action, the functionality really needed to lead the design. We collaborated with U.K. designer Aitor Throup, who designed the star squad combat gear. He’s really innovative in terms of avant-garde, functional design.