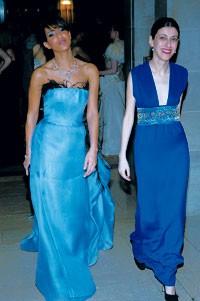 NEW YORK — The theme of 17th-century chic may conjure visions of plumed hats, cascading ringlet updos and tightly corseted bosoms, but few revelers at the Frick Collection’s Golden Age dance on Thursday night took the invitation’s commandment to heart. While there were the occasional velvet knickers and hoop skirts, most of the social set in attendance thankfully opted for Empire dresses, vivid fur chubbies and piled-on necklaces.

“I got really into the Edwardian theme of the first ball we threw here,” recalled honorary chair Lauren duPont, who chose a white embellished J. Mendel fur as her nod to the evening’s dress code. “But then I remember the Tartan Ball was harder to pull off.”

Her date for the evening, Renée Rockefeller, went for a more modern take in a beaded Andrew Gn dress and loads of costume gold bangles her daughter picked out for her. Behnaz Sarafpour turned up with the muse for her fall collection, Deena Abdulaziz. “Isn’t it obvious why she inspired me?” asked the designer of her stunning companion, who was actually dressed in vintage Lanvin.

As the night wore on, Lauren Bush took to the dance floor with David Lauren, while Tinsley Mortimer served as Lauren Davis’ twirling partner.

Designer Gilles Mendel, who co-sponsored the ball along with David Yurman, beamed as he eyed the bevy of PYTs dressed as either ethereal goddesses or slinky sirens. “This is like a fantasy,” he enthused.  “To see my dresses on all these real women with real bodies is a dream.”