Andrew Bolton, a curator at The Metropolitan Museum of Art’s Costume Institute, talks about his career. 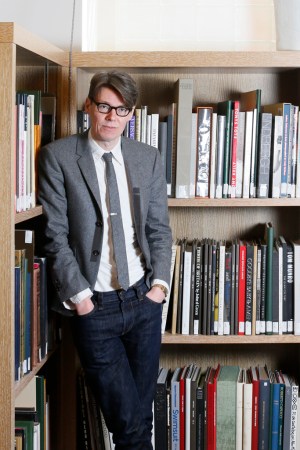 Legions of visitors to The Metropolitan Museum of Art’s Costume Institute have seen Andrew Bolton without even knowing it.

This story first appeared in the April 1, 2015 issue of WWD. Subscribe Today.

Working at the Fifth Avenue museum since 2002, the British-born curator has contentedly gone about his days behind-the-scenes. But in the past 12 years, he has put his personal touch on 12 exhibitions that have been gazed upon by thousands, including many with the Costume Institute’s curator in charge, Harold Koda. Now, as this year’s Vilcek Foundation fashion prize winner, Bolton can’t shake the spotlight. The prize — whose jury included Koda, Cecilia Dean, Jimmy Moffat of Art + Commerce and Julie Gilhart among others comes with a $100,000 award.

So one wintry morning, Bolton agreed to talk shop in The Costume Institute library, just steps away from his office. With the Barneys-bequeathed Diana Vreeland mannequin looming playfully, the ultraorderly atheneum with a pencils-only policy was a fitting location to learn about his career. Fastidious as the Met is about preserving fashion and its role in history, Bolton, along with Koda and the team, are very much focused on tomorrow. “We want to be on the cusp of predicting what might be interesting to people. But I think fundamentally what we do is to make people think differently about fashion,” Bolton said. “I firmly believe that fashion is an art form, although not all fashion is art. Our role is to enhance the appreciation of the artistry of fashion.”

Inclined to speaking in the plural, Bolton is engaging and quick to laugh. Described by one friend as “the perfect combination of charming and intelligent,” Bolton said of his low profile, “Putting shows together and coming up with ideas for exhibitions is what I love the most. It’s becoming harder and harder to come up with ideas that one thinks will engage an audience because people’s understanding is becoming more sophisticated and enhanced.”

To that end, one of the more intriguing guests at the preview for his next project “China: Through The Looking Glass” was renowned filmmaker Wong Kar Wai, the exhibition’s artistic director. Bolton screened a few of his film clips that will be featured, and spoke of a show that will have visitors wending their way through three areas of the museum. The idea of movement and technology appeals to Bolton, who would love to do a show about the sound of fashion, perhaps in the Met’s American galleries. Inspired by how the writers Edith Wharton and Henry James described style and fashion through such sounds as a crinoline petticoat brushing against a piece of furniture, Bolton said, “It would be lovely to have your eyes closed as well, so that you could fully appreciate it.”

Having introduced Bolton to Koda over lunch at Bottino in 2000, Yeohlee said Bolton’s talent stems from “his imagination. When you have imagination and you’re scholarly and you do your homework, the results can be staggering.”

The son of a newspaper man and a stay-at-home mother, Bolton and two siblings grew up in Lancashire, north of London. Attending “a quite traditional Catholic school,” he ditched the doctor-lawyer-anything-professional job track, after two anthropologists paid a visit to his high school classroom. Bolton was enthralled by the romance of other cultures and the idea of travel. “At 16, my access to Africa and Asia was very much through books, films and paintings so it was a very romanticized and probably exoticized idea of what other cultures were like, their customs and their dress. I always felt their cultures were different because they seemed so completely different in terms of their clothing in particular. When I heard the two anthropologists talk, what struck me was how similar we are in terms of human beings.”

So it was off to the University of East Anglia to study anthropology, followed by a master’s degree in non-Western art, bookended by extensive travel in the Far East and Australia. He then joined the Victoria and Albert Museum in London, where he spent nine years before relocating to New York for The Met.

Bolton, encyclopedic about fashion designers, singled out during the course of conversation the names of Chanel, Poiret, Azzedine Alaïa, Issey Miyake, Rei Kawakubo, Yves Saint Laurent, Craig Green, Simone Rocha, Christopher Kane, Nicolas Ghesquière, Hussein Chalayan, Viktor & Rolf and John Galliano. He said of Miuccia Prada, “Sometimes it’s easier to send a dress down the runway made out of razor clam shells because the obvious artistry of it is immediate. But to send a dress down the runway, which is a dress, but one that has layers of meaning is sometimes more complicated.”

He knows his partner Thom Browne like no other. Both are “absolute creatures of habit,” who relish a night in or dinner at Waverly Inn or Morandi. Regarding work, Bolton said, “Thom is much more lighthearted, but he’s also darker. But there’s always a lightness to the dark stories he tells, whether it’s about death or religion. There’s a real innocence to Thom’s approach to fashion and the stories that he tells. I use the left side of the brain a little more, the analytical and referenced. Thom deliberately doesn’t go to exhibitions or read about them, because he doesn’t want to be influenced by outside forces. He wants it to be coming from himself. I love being stimulated by images, films, art shows, books.

“We don’t tend to talk about work that much,” he continued. “It’s not a deliberate thing. When your jobs are both creative, when you leave your job you want to watch the Kardashians on TV,” he said with a laugh. “We watch a lot of appalling television. And it really is just a way of switching off.”