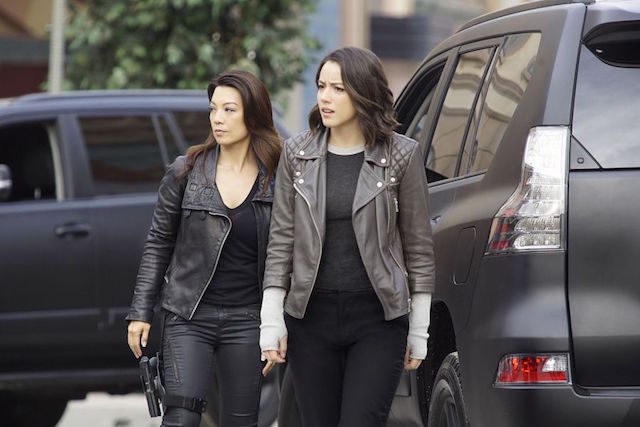 Marvel’s “Agents of S.H.I.E.L.D.” returns to ABC tonight at 10 p.m. for its fourth season. We caught up with costume designer Ann Foley to talk about how she approached Daisy’s new positioning on the show, and the arrival of a new character.

WWD: How did you approach the costuming for season 4?
Ann Foley: At the end of the season, we saw a shift for everyone, which is sort of what we’ve done with every season. Every season sort of has its own feeling and own vibe and Season 4 will be no different. It’s a little bit of a fresh start in the aftermath of the finale — Daisy is no longer part of the team, she’s out on her own, and her costumes will reflect that. You know where she’s at in her head space, and with [Leo] Fitz and [Jemma] Simmons you’re going to see their shift that you saw in season 3 continue into season 4, and I think that is also true with [Phil] Coulson. I think you’ll still get to see the bad-ass civilian look that we established on him last season; we’ll continue with that.

WWD: How have Daisy’s costumes changed to reflect her new positioning in the show?
A.F.: Yeah I mean, the fun thing with Daisy is that she’s had such a fantastic character arc throughout the show. As a costume designer, I’m a storyteller, and so my job is to really work closely with the writers on the show and to help develop these characters and to tell their emotional journey through their clothes.

We’ve seen Daisy grow up on the show; she’s gone from having the more youthful sort of  “teenage” vibe that we had in season 1 — with all the plaids — to a little more tactical and darker in season 2, when she started working with May as her S.O. and Ward. And then you see that more in season 3 — she starts coming into her own, and especially with all the stuff that went on with Hive, it really affected her emotionally and she separated from the team. She went undercover, and that’s the look that you saw at the end of season 3. So now that she’s on her own, she is working undercover a lot still, but she’s still doing some of her civilian stuff. She’s got her Quake costume, so she’s still going out as Quake, so we haven’t made a big shift with that costume. There will be a few changes with it that you’ll see coming up in the season as a little tease, but I can’t really talk about those yet

WWD: Did you alter Daisy’s civilian look?
A.F.: Yeah, and I think you can see that in the photos that were released. It’s a little edgier. We took it a step further than what it was at the end of season 3, which was more of a Goth thing, and now it’s a more of an edgy darker vibe. It reflects her head space and where she’s at — she’s not messing around. My inspiration for that was a little “Girl with the Dragon Tattoo,” but not that far.

WWD: How did you approach Jemma Simmons this season?
A.F.: Simmons had such an arc in season 3, when she ended up on Monolith, and then when Fitz saved her and brought her back, he saw her suffering from post-traumatic stress disorder. So what we did is we stripped away all the patterns and the colors that she had been wearing season 1 and 2, and just sort of wanted to show that emotional journey. Then as she started getting better, you saw the color coming back into her clothes and she really grew up; she changed. Again, we wanted to reflect that in her clothes, so going into season 4 it’s sort of a continuation of where we ended the season, but now it’s even a little more sophisticated and a little more grown up. You’re going to see more color popping back in as her relationship with Fitz is more solidified and they’re in a happier place.

WWD: What goes into planning the costumes when you have to consider two different “looks” for each character?
A.F.: We’ve pretty much established what their tactical looks are. I think where we have a lot of fun is when they go undercover — that’s always my favorite thing to do with the team. I always say “undercover is my everything” because it’s an opportunity to have so much fun with them and to put them in something they’ve never necessarily worn before. Last season, I got to put Elizabeth in such a fun outfit when we went to this European club for inhumans, and she was wearing these fabulous Helmut Lang leather pants and a Michael Kors little jeweled top and an Ero jacket. It was fabulous, it was so much fun, and it was something that Elizabeth has never done on the show. It was a really fun opportunity to take Simmons and drop her into this world, and what would Simmons wear when she was trying to be sexy and dress up? So again we go into that head space of the character, and what would Simmons do, what is her idea of being sexy? It doesn’t necessarily have to be a little tight dress.

WWD: What were your favorite looks in season 4?
A.F.: I think one of my favorites so far is the Aida character who’s coming up, played by Mallory Jansen. And that’s a costume that we built here in-house. I have a really fabulous cutter fitter this season by the name of Henry Po, so I wanted to make something that was really simple that wouldn’t take away from the character, but I didn’t want it to look like something that just came off the rack. I wanted it to have that feeling of “where did this outfit come from,” that was just specifically hers. I was so inspired by Alexander McQueen and the style-lines that McQueen has used in the past, so we created this really beautiful simple skirt suit for her that is just gorgeous on Mallory, and she wears clothes so beautifully. It was so much fun to do that.

WWD: How many of the costumes are custom made versus purchased?
A.F.: I would say we probably make about 30 percent of the costumes — it depends on the need of the character. Hive last season was a great example of something that you know was definitely going to have to be a custom-made. It was actually a combination of custom and store bought, but you know his character being an inhuman and also having access to all the money in the world — what would he look like? What would he wear? Again, I wanted to keep it really simple and very grounded in reality.

Sometimes to give [the look] that special touch, you just have to make [the costumes]. I personally love being able to build the costumes; it gives the show its own sort of special feeling and vibe. But that’s not to say we don’t also purchase a lot, because we definitely do. We have our favorite designers for the girls and especially for Daisy — we do tons of Topshop for her and All Saints is a big favorite, and J Brand of course — and same with Simmons. I think Simmons wears more Rag & Bone than anybody on the show, and J. Crew and Opening Ceremony. These are some of our favorite go-to designers on the show. It’s about finding cool and interesting things that are just different, and so we source them everywhere. I’ve spent more time on ShopBop than probably any other website on the Internet. They’ve got such great stuff and they’ve been a big, big supplier for the girls.

WWD: Do you have to take the rest of the Marvel Cinematic Universe into consideration when working on the show?
A.F.: I’m such a huge fan of the MCU and all of the movies, and I’ve always tried to make sure that what we’re doing on the show makes sense within the larger scheme of things within the MCU. So that if for some reason one of the characters ever did drop in on one of the films, they wouldn’t look out of place.

WWD:  Is there anything else you’d like to add about Season 4?
A.F.: Well, the big thing for us this season is Ghost Rider … we’re super excited about having him on the show this season. We based the look of his character off of the comics written and illustrated by Phillipe Smith and Tradd Moore. Our creative director (Joshua James Shaw) at Marvel Television did the illustration of the jacket for me. It’s such a great look on Gabriel Luna, and you know, we just really tried to keep his character very grounded, and we used brands that seemed to really suit his character — like Levi’s, and he’s got these really great Vans,  you know old-school — and then we got these fantastic driving gloves from Dorothy Gaspar for him. He looks like he just stepped right out of the comic pages.