Breaking bread with Geoffrey Zakarian, chef and co-owner of Town, who's itching to break into fast food. 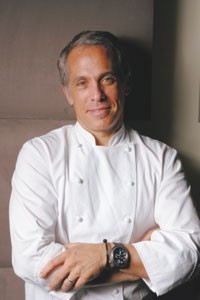 NEW YORK — Anyone who has ever eaten at Town, the pillar of sophisticated, high-end cuisine nestled in the basement of the Chambers hotel, may be intrigued to learn its chef and co-owner of four years, Geoffrey Zakarian, is itching to break into the fast-food market.

“At some point in time, you need to develop a model that both makes you popular and makes you money, so the best way to do that is for us to go into more fast-food, cafe thinking,” he says. “We can do more covers, less expensive, and gather all those people that otherwise wouldn’t have a chance to try our food. So we can touch people that have $20 to spend.”

Zakarian’s latest culinary endeavor, Country, in The Carlton hotel on Madison Avenue and 29th Street, offers him that opportunity. The urban realization of Zakarian’s contemporary pastoral dream, it’s comprised of a downstairs cafe, which begins serving breakfast, lunch and dinner Wednesday, and a fancier upstairs restaurant, slated to open in six weeks, which will offer a set, three-course dinner menu, rotating biweekly and presented family-style.

“This is not the country of Norman Rockwell; it’s more Russel Wright, more modernism,” he explains between sips of a ginger beer he is auditioning for the downstairs bar. “I wanted to do that in the rooms of an auberge with a great restaurant and gardens and all that and call it ‘Country,’ but this came along and I decided to do my version, a grand cafe, and call it ‘Country’ anyway because I can always do that another time.”

Along with executive chef Doug Psaltis, Zakarian has created a casual but refined menu, including dishes like a Croque Madame with truffled cream, the Country Burger with shallot tempura on an English muffin and Poached Chicken Salad. But Country presents an enterprise on an even grander scale: In addition to the upstairs and downstairs rooms and four bars, the kitchen will provide room service for the hotel’s 350 rooms and “white-glove waiter” room service, a private reservation line and food consultations to residents of the soon-to-open 76 Madison condos next door.

Zakarian is no stranger to either the hybrid food-hotel world or the Midtown environment. After stints at Le Cirque and 21 Club, he opened 44 in the Royalton in 1989, back when, as he puts it, “having a restaurant in a hotel lobby was a no-no,” and followed up with the Blue Door at the Delano in Miami.

For Country’s design, Zakarian reteamed with his coconspirator from Town, David Rockwell. The two certainly had their work cut out for them, considering the wrecked state in which they each encountered the original landmarked building’s interior. (“It was a real mess,” says Zakarian, while Rockwell declares, “It was grim,” when he first began the project in 2002). But these bare beginnings only made the outcome that much sweeter when Rockwell’s workers uncovered a Tiffany-style stained glass dome and Twenties mosaic floors.

Bertoia chairs from the Sixties combine with Chesterfield-style sofas and glass-encased linen light fixtures, while a semi-opaque green glass catwalk links the upstairs dining room to a champagne bar, to be accessorized by specially designed Lalique glasses. There are even two crystal chandeliers in the second floor’s open kitchen that make it seem, as Zakarian says, “like a warm kitchen in someone’s home.”

If this all sounds a bit chicer than your everyday home-cooked meal or cafe drive-by, consider it simply the decorative icing on a conceptually old-fashioned cake.

“Modern is something, to me, that is just great service, great product and knowing how to take care of your guests,” says Zakarian. “You can throw a paper towel on the floor, folded chairs and if you have that, you will be modern and your restaurant will be packed and it will be in the paper and everyone will want to get in. If you’re modern because you look modern and you’re not around in two years, what does that make you? It means you’re sort of out of touch, I guess.”

Herewith, a few of his favorite New York boîtes: