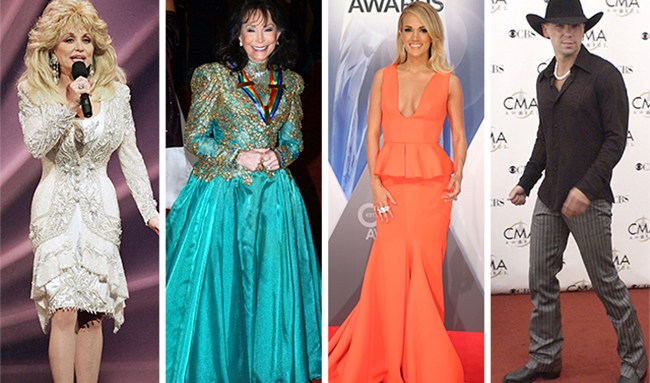 Blame the big hair, turquoise ballgowns and rhinestone-encrusted suits. Toss in the stacked jeans, cowboy boots and plaid shirts and it’s no wonder that the country music industry has never received high marks when it comes to its fashion choices.

Today’s stars have tossed aside their Manuel jackets and prom-like dresses — or worse — and are embracing designer names. So when the industry turns out in force Wednesday night for the 50th anniversary of the Country Music Association Awards, the red carpet will be filled with looks from some of fashion’s most-directional designers including Alexander McQueen, Givenchy and Dolce & Gabbana. To mark the anniversary, the association has asked everyone to dress in black tie this year.

“Black tie to Nashville is not black tie to New York,” said Trish Townsend, a longtime stylist in the country music capital who has dressed everyone from Carrie Underwood and Blake Shelton to Vince Gill, LeAnn Rimes, Alan Jackson and Tim McGraw.

“We don’t do the Beyoncé ‘show me all your parts’ around here,” Townsend said. “So you’ll still see jeans, but others will be original and unique — but still staying true to their audience.”

Townsend traces artists’ more-fashionable shift to Underwood, who became a mega-success in the country music world after winning “American Idol” in 2005. “Taylor [Swift] had not yet hit the scene and the only one who was doing high fashion was Faith Hill,” she said. “Carrie was the first country artist to come off of ‘American Idol’ and she wasn’t ashamed of it.”

So Townsend dressed her in David Rodriguez for her first red carpet jaunt that year, and over the years Underwood has worn Badgley Mischka, Gauri & Nainika and others — many of which show off her well-toned legs.

“The first time I put Carrie into shorts, it changed everything,” Townsend said.

Those gams will undoubtedly be in full view Wednesday night since Underwood will serve as cohost of the show for the ninth consecutive year, along with Brad Paisley, and will change outfits 11 times. The looks this time will be inspired by the Sixties through the Aughts in a nod to the history of the event.

Before Underwood, Townsend said most entertainers just wore their performance clothes to the event “or went to the local mall. Fashion never had a big presence.” But today, entertainers are taking more risks — and getting more respect.

“The designers have really come on board and realized it’s a good marriage between these country artists and their fans,” Townsend said. “Before, they were skeptical, but designers such as Oscar de la Renta and Valentino are moving toward an acceptance of Nashville and its fashion.”

Gina Ketchum, the stylist for the popular duo Florida Georgia Line, will be dressing her clients in runway designer fashions on Wednesday night. Brian Kelley will wear a black Alexander McQueen suit with embroidered roses on the jacket on top of a black shirt with a burgundy stripe running down the middle. Tyler Hubbard will don a black Givenchy suit with silver chain detailing on the collar and pockets. His black shirt will have the same contrasting trim.

“Brian and Tyler are excited to dress up, but that’s not true for everybody,” she said.

Their touring outfits have also gotten a facelift since they started out in 2012 wearing jeans, T-shirts and tanks. Now they opt for Diesel and Belstaff jeans and Gucci work boots. “They give a high-energy show and need to know they can jump off the high riser in what they’re wearing. They’re not Adele, standing still and singing.”

She said in the early Nineties, country red carpet events were filled with ballgowns, sequins and bow ties, but then things got casual, and jeans and baseball caps were not uncommon. “So the CMA is using the 50th anniversary to kick it up a notch. It’ll be a welcome return to the glamour we’ve been missing.”

John Murphy, who dresses artists including Jason Aldean, Easton Corbin, Jon Pardi, Dustin Lynch, Chase Bryant and Parmalee, said that while his clients are more fashion savvy, it’s still not easy to get designer clothes for them to wear. “It’s nearly impossible to get anything on loan,” he said. “There’s a misperception that we’re behind the times or not trendy or current.”

For this year’s event, Pardi went the custom route and will wear a burgundy jacket with distressed leather detailing and a bolo tie with his trademark cowboy hat. Lynch will wear a white pick-stitch tuxedo and black bow tie from Dolce & Gabbana and Bryant has opted for the brand’s horse and cowboy print shirt that he’ll wear under a black three-piece suit. The four members of the group Parmalee will wear Dsquared2, Alexander McQueen, Dolce & Gabbana and Paul Smith, Murphy said.

“People are really starving for designer labels here,” he said. “It’s a big city growing in leaps and bounds but there’s no place you can buy Balmain.”

Among the best-dressed entertainers in Nashville, according to Townsend, are McGraw, who channels his sex appeal and “tweaks it in just the right way to make the girls swoon” (although he generally sticks to his black cowboy hat). She also likes Sam Hunt, who is “modern and young”; Aldean, who stays true to his “southern rocker” roots with, again, jeans, a cowboy hat and perhaps a jacket, and Little Big Town, whose two female members manage to dress with an edge but still look ladylike. She also liked Kacey Musgraves’ “cute little pinup” outfit she wore to last year’s awards, a collaboration between her stylist Hayley Atkin and costume designer Enrique Urbina.

“Country has come a long way,” Ketchum said, “and we want to show the rest of the world how we’ve evolved.”