VENICE — "I'm with the most intelligent people in the world at the moment," beamed Miuccia Prada at Fondazione Prada's party at the 51st Art Biennale here last Thursday to honor Carston Holler, Rem... 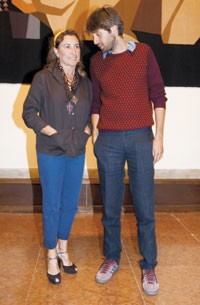 VENICE — “I’m with the most intelligent people in the world at the moment,” beamed Miuccia Prada at Fondazione Prada’s party at the 51st Art Biennale here last Thursday to honor Carston Holler, Rem Koolhaas, Mariko Mori and Francesco Vezzoli. “I’ve already been proposed at least 600 different projects. I love to be a catalyst of ideas, to put minds together and always create something new.”

Prada was clearly in her element, skipping from one guest to the other — sky-high heels notwithstanding — posing for photographs and appearing in the best of spirits. Among those who flocked to the party were PPR tycoon Francois Pinault, Luisa Beccaria, Vogue Italia editor in chief Franca Sozzani, Italian aristocrats Bianca Arrivabene, Guido di Torlonia, Giangaleazzo Visconti, Carla Maria Orsi and fashion veteran Beppe Modenese. “[Miuccia] would rather be surrounded by all these artists than all the fashion people in the world,” whispered an onlooker.

Just don’t call her a patron of the arts. “I don’t like that word. I’d rather be considered as someone who turns projects into reality, and the artists I work with know it’s not a matter of forking over money. They know I have a passion,” said Prada.

Indeed, guests and artists alike had only praise for the designer. Mori, wearing a traditional white kimono, admitted she was her “best supporter. She understands about creating things and supports artists from her heart.” Koolhaas, who has collaborated with Prada on her stores, said he admired her “endless curiosity, intelligence and constant ambition to experiment.”

Fondazione Prada wasn’t the only arm of a fashion company celebrating the Biennale, which runs through Nov. 6. On Friday, at the city’s famed Hotel Danieli, Bulgari presented a book dedicated to the Italian Studio Program at New York’s PS1/MoMA: “Young Italian Artists in Italy at the Turn of the Millennium,” which is a compendium of essays on the 44 artists selected for the program and an overview of Italian art in the last decade. “This is one of the most prestigious contest-scholarship programs in Italy,” boasted Giulio di Gropello, founder and director of the Italian program, who was joined by several previous Venice Biennale winners.

That morning, Max Mara chairman Luigi Maramotti hosted a breakfast for the first Max Mara Art Prize for Women and announced the name of its curator: Iwona Blazwick, director of London’s renowned Whitechapel Gallery, which pioneered artists such as Frida Kahlo and Cristina Iglesias. The prize grants an emerging artist a six month residency in Italy, and her resulting work will be acquired by the Maramotti Collection. “Iwona is extremely dynamic and really believes in this initiative,” said Maramotti, whose family owns Max Mara and who is involved in art restoration projects and is a major collector of contemporary art.

Maramotti and his wife, Michela, were also on hand Friday night, when Angela Missoni hosted a dinner for the curator of the Chinese pavilion on her family’s boat, a traditional burchio named Timoteo. Missoni was joined by Chloe designer Phoebe Philo, artist Anish Kapoor and his wife Susanne, and Michael Chow and his wife Eva. In honor of her Chinese guests — who are participating in the Biennale for the first time — the boat’s decor had been redone in Asian style. But it was the art in Venice that had Missoni swooning.

“This is all very exciting. I’m in a daze looking at all the installations,” she said.