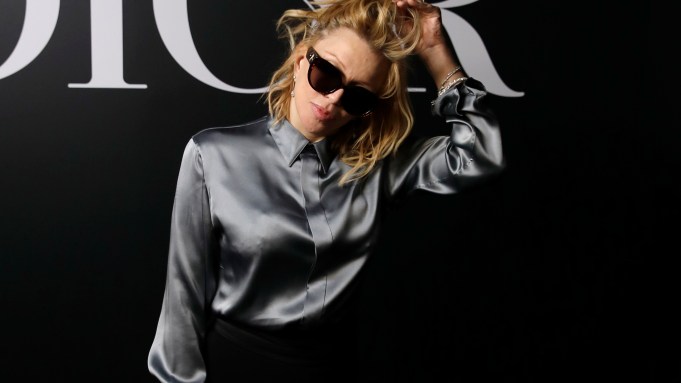 WE ARE FAMILY: Are fashion shows the new family outings?

David and Victoria Beckham turned up at the Dior Men’s show on Friday with their eldest son Brooklyn, 20, while Kate Moss perched in the front row with her daughter Lila Grace, 17.

They were joined by fellow Brits Robert Pattinson, who is the face of the new Dior Homme Eau de Toilette, and actress/model Cara Delevingne. The pair embraced warmly before taking their seats in the huge show space sitting right in the middle of the Place de la Concorde.

“I’m really happy to be seeing a Kim Jones show for the first time,” said Delevingne, posing sideways to show off her hairstyle that evening: a bunch of feathers trailing from her long ponytail.

A little further, Courtney Love was cozying up to model Jordan Barrett.

“We met at a Halloween party five years ago,” said Barrett, looking over at Love.

“I was dressed as ‘The Angriest Girl in the World,’” she deadpanned. “I am that every hour.”

Love, who used to be the frontwoman of rock band Hole, is working on new music.

“I’m writing a record at the moment,” said the artist and musician. “I got this great amplifier from Marshall the other day and I turned it on. I took a video for Instagram, in it you can hear me gasp because the noise is so loud. It’s a really good amp.”

Love, who is deep in the process of writing, will be recording in various studios in the U.K. In the meantime, she’s taking a bit of time off — and fantasizing about alternative lives.

“Kim Jones showed me his library,” she said. “He has such an amazing collection of books. I just want to go be his librarian.”

For fashion designer Jean-Charles de Castelbajac, being inside a black box triggered memories — happy ones.

“I find it very moving because I held a fashion show here in a box like this — exactly 10 years ago,” he said, dressed in a green camouflage outfit with a red beret. Castelbajac recalled his collection was inspired by an artist, Surrealist photographer Man Ray.